While you were waiting on hold with a flower shop for Valentine’s Day late last week, a group of Texas cannabis advocates was busy sharing its own flowers outside of Austin’s Travis County Courthouse in what local activists are now calling the first annual Valentine’s Smoke Out.

According to local ABC affiliate KVUE, the February 14th smoke session was inspired by the recent decision by Austin’s City Council to halt low-level arrests for cannabis possession. And while the city-specific decriminalization effort has already received significant pushback from local law enforcement officials, local cannabis users wanted to make it known that they are feeling the love from City Hall. 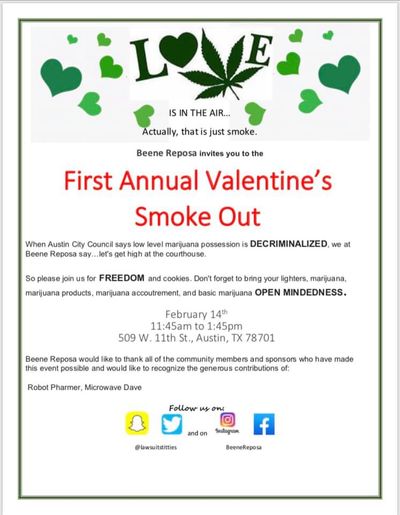 Austin police chief Brian Manley told reporters late last month that his office would ignore the Council decision and continue to make pot arrests, so there was still the question of how cops would react to the February 14th smoke out. But whether it was holiday cheer or simply respect for the word of law, Chief Manley and the Austin PD restrained themselves, with no arrests made during the courthouse smoke sesh.

The public pot consumption event was a resounding success, and Reposa told KVUE that the plan is to turn the event into an annual Valentine’s Day occurrence. So next time you’re planning a trip to Austin, consider skipping SXSW and plan a romantic February getaway with your most beloved strain.

NEWS
ACTIVISM
PUBLIC CONSUMPTION
TEXAS
MORE...
Zach Harris
FOLLOW
Zach Harris is a writer based in Philadelphia whose work has appeared on Noisey, First We Feast, and Jenkem Magazine. You can find him on Twitter @10000youtubes complaining about NBA referees.
Share this article with your friends!
AD
By using our site you agree to our use of cookies to deliver a better experience.
Accept
Decline
MORE FROM MERRY JANE