NEWS
Astronaut Edibles Are Here, and They Will Get You Higher Than the Atmosphere
AD
Space Food Sticks, which once fed NASA astronauts during America’s earliest space missions, are now the first legacy brand to enter the cannabis edibles market.
Published on July 19, 2019

A legacy food brand has officially entered the cannabis space, debuting infused edibles that once, well, went to outer space. The newest incarnation of Space Food Sticks, which fed US astronauts during NASA’s heyday, will now be available featuring 5mg of THC.

Space Food Sticks were originally created in the late ‘60s by Pillsbury (tee hee!) through a joint venture with NASA. At the time, astronauts only ate liquid or pasty foodstuffs that came in tubes. Space Food Sticks became the first solid food option for American spacefarers. As the sticks rose in popularity in the ‘70s, grocery stores stocked commercial versions, essentially becoming the nation’s first protein and energy bars.

How did these sci-fi culinary marvels go from Space Race to landrace?

By the ‘80s, Space Food Sticks, which had been rebranded as simply “Food Sticks,” weren’t cool anymore. A series of unfortunate political events, soaring petroleum prices during the Oil Crisis, and big-time budget cuts from the “small government” folks in the Reagan Administration meant NASA fell out of the nation’s collective favor. Besides, why munch on nutritious chewy Food Sticks when you could load up on hyper-sugary candy bars instead?

To keep Space Food Sticks alive, Eric Lefcowitz founded the Space Food Sticks Preservation Society in 2001. Although grocery stores were no longer stocking the bars by the 2000s, Space Food Sticks had long achieved cult status, and a market for them still thrived in Australia. By 2006, Lefcowitz expanded his preservation efforts by forming a company called Retrofuture Products, which manufactures the sticks for nostalgia sales at space museum gift shops nationwide.

Then, in 2014, Lefcowitz met the editor of Edibles Magazine, a publication devoted to weed-infused food. That’s when he got the idea to launch Space Food Sticks toward a new but obvious-in-hindsight orbit: the stoner market. 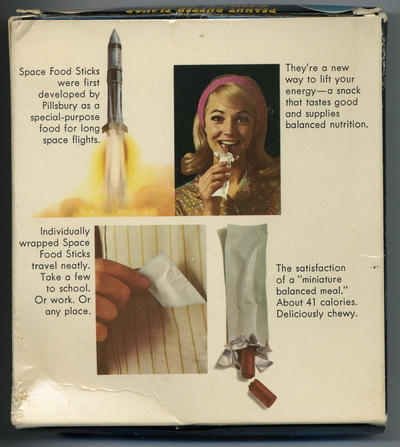 "Cannabis is a serious and important business, but the element of whimsy shouldn't be overlooked,” Lefcowitz said in a press release. “With Space Food Sticks, we've captured that spirit of fun that's been missing. This is a transformational product."

For now, the infused Space Food Sticks will only be available at California dispensaries, since Retrofuture Products’ partner and weed provider, The Art of Edibles, is based in Los Angeles. But who knows? If their cultish appeal comes back, they may blast off into other states that legalized, too.

"It's one small stick for a man," Lefcowitz said, "and a tasty one at that."

Other major legacy-brand food and drink companies have either flirted with the idea of infusing foodstuffs under their brand names, or they’ve been slow to develop and launch their infused products.

Constellation Brands, the company behind Svedka vodka and Corona beer, merged with Canada’s Canopy Growth to make cannabis-infused beverages, but they haven’t rolled them out yet.

Representatives from Coca-Cola, the world’s biggest and best-known beverage company, said they are considering CBD-infused products, but they’ve announced no plans to actually do it.

NEWS
EDIBLES
PRODUCT
HISTORY
MORE...
IN THIS STORY
CBD
Click to shop at our CBD store
Randy Robinson
FOLLOW
Based in Denver, Randy studied cannabinoid science while getting a degree in molecular biology at the University of Colorado. When not writing about cannabis, science, politics, or LGBT issues, they can be found exploring nature somewhere in the Rocky Mountains. Catch Randy on Twitter and Instagram @randieseljay
Share this article with your friends!
AD
By using our site you agree to our use of cookies to deliver a better experience.
Accept
Decline
MORE FROM MERRY JANE