HEALTH
Why Are Health Experts Suddenly Worrying About Marijuana Addiction?
AD
A new feature in “The Atlantic” details a supposed increase in cannabis use disorder cases since legalization started sweeping the country, raising new questions about the risks of reefer reform.
Published on August 21, 2018

Is America’s cannabis stigma fading too fast? In a new report from The Atlantic, author Annie Lowrey examines America’s growing love affair with legal weed from the perspective of public health experts who argue that marijuana addiction is on the rise.

The sources suggest that the public’s lax attitudes about increased access to weed could soon lead to unforeseen problems, ones they claim have been ignored by legalization advocates. As states across the U.S. enact their own piecemeal legalization laws, health specialists pointed to studies showing increases in daily pot use and spikes in self-reported cannabis use disorders (CUD).

“In large national surveys, about one in 10 people who smoke [cannabis] say they have a lot of problems,” Keith Humphreys, a professor of psychiatry and behavioral sciences at Stanford University told The Atlantic. “They say things like, ‘I have trouble quitting. I think a lot about quitting and I can’t do it. I smoked more than I intended to. I neglect responsibilities.’ There are plenty of people who have problems with it, in terms of things like concentration, short-term memory, and motivation. People will say, ‘Oh, that’s just you fuddy-duddy doctors.’ Actually, no. It’s millions of people who use the drug who say that it causes problems.”

And indeed, in a 2015 study published in the Journal of the American Medical Association (JAMA), researchers compared the marijuana use habits of more than 30,000 Americans in 2002 and 2012, and found a significant rise in both daily users and self-reported CUDs. In the face of those statistics, Humphreys and likeminded health experts have begun questioning the efficacy of cannabis legalization throughout the country.

“I do think that not legalization, but the legalization movement, does have a lot on its conscience now,” Mark A. R. Kleiman, a professor of public policy at New York University, told Lowrey. “The mantra about how this is a harmless, natural, and non-addictive substance — it’s now known by everybody. And it’s a lie.” 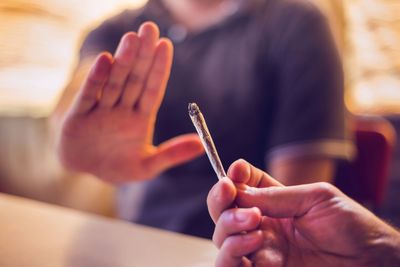 But as Kleiman, Humphreys, and others quoted in the feature, including notorious anti-cannabis lobbyist Kevin Sabet, are quick to worry about heightened THC concentrations and how much employee productivity will be lost due to frequent cannabis use on the clock, it is important to remember that cannabis legalization is not occuring in a vacuum, and must be considered amongst a myriad of external factors.

As America continues to struggle with a widespread opioid crisis — the nation’s deadliest drug abuse problem ever, one sparked and continually fueled by pharmaceutical companies with seven-figure lobbying budgets — and private prisons pile profits hand-over-fist for incarcerating non-violent drug offenders, the weight of largely anecdotal evidence purporting cannabis users to be lazy or harmful does not stack up.

“The big-picture view is that the vast majority of people who use cannabis are not going to be problematic users,” Jolene Forman, an attorney at the Drug Policy Alliance, told The Atlantic. “They’re not going to have a cannabis-use disorder. They’re going to have a healthy relationship with it. And criminalization actually increases the harms related to cannabis, and so having a strictly regulated market where there can be limits on advertising, where only adults can purchase cannabis, and where you’re going to get a wide variety of products makes sense.”

In a Twitter thread presenting rebuttals to a number of the article’s central claims, Forman’s Drug Policy Alliance colleague Sheila Vakharia clarified the difference between frequent use and use disorders, contextualized cannabis addiction issues outside of legalization, and presented a study that plainly refutes the 2015 JAMA research.

“First of all, this piece reiterates the myth that legalizers somehow don't think cannabis/marijuana use can be harmful,” Vakharia argued. “No one has ever said that. However, we DO say that the harms of prohibition and its collateral effects are why legalization is important. There are absolutely problematic players advocating for policy reform — we live in a capitalist society with no publicly funded campaign system. Special interest money influences all legislation in US. Marijuana policy is no exception.”

As for solutions to the problem of cannabis use disorders, Klieman has suggested implementing legalization programs similar to Washington D.C., where possession and home cultivation is allowed, but retail sales are not. What they failed to note, though, is that marijuana-related arrests have actually increased in the District since legalization, with police now focused on minor distribution and public smoking charges. To make matters worse, D.C. has no system for strength or pesticide testing, turning legal users into uninformed customers.

At the end of the day, it is important to recognize that, for better or worse, cannabis interacts with each individual differently. And while that can absolutely result in negative effects on some users’ lives, it is still too early in our country’s experiment with legalization to universalize those anecdotal claims. And if we are to learn more about the plant and its best applications, we must start by opening up both clinical research and prison cells. Because, at its core, the fight for cannabis legalization is still a battle for human rights.

NEWS
420
MEDICINE
LEGALIZATION
MORE...
Zach Harris
FOLLOW
Zach Harris is a writer based in Philadelphia whose work has appeared on Noisey, First We Feast, and Jenkem Magazine. You can find him on Twitter @10000youtubes complaining about NBA referees.
Share this article with your friends!
AD
By using our site you agree to our use of cookies to deliver a better experience.
Accept
Decline
MORE FROM MERRY JANE