HEALTH
The Media Is Spinning the Latest Weed and Birth Defects Study All Wrong
AD
A new study claims it found scientific proof that weed causes birth defects like cleft lips and eye abnormalities. The researchers' methods, however, were very questionable.
Published on November 8, 2019

A new study from North Carolina published in Nature: Scientific Reports concluded that cannabinoids such as THC and CBD can cause birth defects. The media ran with the authors’ conclusions, but a closer inspection of the study reveals that it didn’t show what journalists portrayed.

For instance, Neuroscience News ran the headline, “CBD and THC use during early pregnancy can disrupt fetal development,” with a summary stating, “Brain and fetal development damage caused by exposure to CBD and THC are very similar defects seen in fetal alcohol syndrome.”

International Business Times’ coverage of the study went with, “One-Time Marijuana Consumption During Early Pregnancy Is Enough to Cause Birth Defects,” which, perhaps unintentionally, invoked the “Not Even Once” marijuana satire memes.

Sounds pretty scary, doesn’t it? Well, despite the media’s insistence that this study is smoking-gun proof that weed ruins babies before they’re even born, it’s not. Here’s a breakdown.

While journalists zeroed in on the “THC” and “CBD” parts of the experiment, they completely ignored the two primary cannabinoids used: HU-210 and CP 55,940, which are both totally artificial, lab-made synthetic cannabinoids not found in cannabis.

“The interaction between alcohol and CBs we witnessed is very concerning,” said the study’s lead author, Eric Fish, PhD, in a press release. “Previous studies have shown that CBs and alcohol are frequently used together, and for pregnant women we’re learning that could be very dangerous to a developing child.”

The researchers tried to account for the synthetic cannabinoids’ uber-potencies by administering smaller amounts to test subjects compared to THC or CBD. 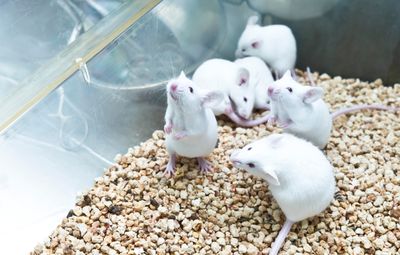 The North Carolina study didn’t look at human subjects. Instead, it studied cannabinoids’ effects on pregnancy with mice and zebrafish.

Now, to the uninitiated, “mice” seems pretty straightforward. But not in the sciences. Labs use specially inbred, “designer mice” that are developed and patented by private research companies. These mice are (mostly) clones, so they’re supposed to guarantee consistency and accuracy for an experiment’s results.

This latest study used mice bred from the C57BL/6J line. C57BL/6J are the most popular mice used in scientific experiments, but they come with heavy genetic baggage due to being so severely inbred for nearly a century. Here’s what the Jackson Laboratory, the company that breeds and supplies these mice, had to say about its “product”:

And what’s the main birth defect the North Carolina researchers found in their cannabinoid-treated mice? Microphthalmia, an eye formation abnormality.

Here’s the deal with C57BL/6J mice — they’re great for studying how alcohol (and possibly marijuana) can cause birth defects at the genetic level, but it’s inaccurate to say that they’re excellent models for showing the severity of said substance’s influence on those birth defects.

In 2010, researchers in Colorado wanted to know how certain mouse strains responded to alcohol during pregnancy, and C57BL/6J was included in that study. They found that of the five most popular mouse strains used in studies of this kind, C57BL/6J developed the most “extreme” cases of birth defects.

C57BL/6J mice “are susceptible to fetal weight deficits, digit, kidney, brain ventricle and vertebral malformations following ethanol exposure during the period of organogenesis. Our results support these findings,” the Colorado researchers wrote. The C57BL/6J mouse “seems to represent the extreme” of alcohol-induced birth defects, “consistently showing effects on most measures.”

The Study Failed to Mention the Exact Mouse Strain Used

As most researchers are supposed to know, the C57BL/6J mouse doesn’t actually exist. That’s because, after roughly 20 generations, so many new mutations arise among the mice that they get classified as a new strain. So, yes, there’s an entire multi-million dollar industry around mice that descended from the original C57BL/6J litter, but the originals are long-gone. Researchers should always note which specific C57BL/6J strain they used due to the genetic nuances among generations and litters. Sometimes those small differences can completely skew a study’s results. (By the way, this strain disclaimer comes directly from the Jackson Laboratory mice slangers).

The North Carolina researchers didn’t state which specific C57BL/6J mice they used, only that the mice came from that line. That’s definitely a huge no-no when it comes to experimental transparency.

Researchers Only Used a Powerful Synthetic Cannabinoid on Zebrafish

To make a solid case for weed causing birth defects, the North Carolina researchers used another animal model, the zebrafish. As one of the study authors noted, “Having the same results across animal models reinforces our findings.” Like the mouse, the zebrafish is often used in alcohol-related birth defect studies, too.

However, this latest study only looked at the synthetic cannabinoid CP 55,940 in the zebrafish. What happened to the THC and CBD given to the mice? Did the researchers run out of weed before they moved on to the zebrafish part of the experiment?

It’s difficult to take this study seriously when they went to such great lengths assessing THC and CBD’s effects on baby mice, yet only gave the completely fake, lab-made stuff to the fish. 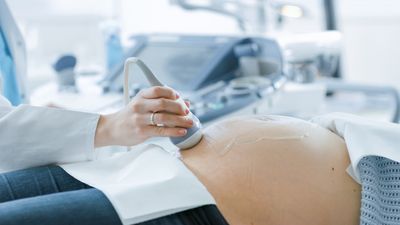 The Only Real Takeaway: Don’t Mix Weed and Booze If You’re Pregnant

Scientists are scrambling to understand how weed affects pregnancies because they don’t know how weed affects pregnancies. That’s pretty much what every single review paper on the topic has concluded. So, feel free to hold fast to your opinion on whether pregnant moms smoking weed are harming their babies, but know that science hasn’t ruled on it one way or the other.

However, one thing was abundantly clear from the North Carolina study. And that’s if alcohol is mixed with any of the four studied cannabinoids (HU-210, CP 55,940, THC, and CBD) the birth defects were way worse than if the mice or fish were given just alcohol alone.

Why that is remains a mystery, but seeing as cannabinoids influence neurotransmitter and hormonal signaling, it makes sense that weed could affect how a person develops inside and outside of the womb. But whether all the changes caused by weed automatically qualify as “birth defects” remains debatable.

Until scientists and doctors work this out, it’s pretty much up to you — the mother — to decide what’s best for you and your kid. And if you need medical weed to get through the morning sickness or the sore back or the constant lack of sleep, by all means, do what you gotta do. Just know that — like everything else you put into your body while pregnant — it could have consequences for your child later in life.

NEWS
HEALTH
RESEARCH
PREGNANCY
MORE...
IN THIS STORY
CBD
Click to shop at our CBD store
Randy Robinson
FOLLOW
Based in Denver, Randy studied cannabinoid science while getting a degree in molecular biology at the University of Colorado. When not writing about cannabis, science, politics, or LGBT issues, they can be found exploring nature somewhere in the Rocky Mountains. Catch Randy on Twitter and Instagram @randieseljay
Share this article with your friends!
AD
By using our site you agree to our use of cookies to deliver a better experience.
Accept
Decline
MORE FROM MERRY JANE