HEALTH
Redefining the Runner’s High: How Marathoners Utilize Cannabis to Train
AD
The advantages of incorporating cannabis use into workout and fitness regimens are slowly being recognized by professional runners.
Published on March 21, 2019

The health benefits of CBD — such as managing pain, seizures and anxiety — seem to get all the attention recently, but the advantages of incorporating cannabis use into workout and fitness regimens are slowly being recognized by professional runners. For some, it’s less about pain relief and more about the mind-body connection.

Collins runs 100-120 miles per week and completes anywhere from 40,000-60,000 feet of climbing per week. He also competes in ultramarathons, which are longer than traditional marathons with distances between 31 and 100 miles. Collins proudly places himself among the growing pool of professional athletes who are cognizant of the benefits of training while high.

For tasks like long-distance runs that can become repetitive, dull and mentally challenging, some athletes claim cannabis helps with concentration and focus. “Cannabis — to an extent — does help with concentration,” Collins tells MERRY JANE. “For example, running on the treadmill without cannabis can be a real drag, but when I use cannabis, it allows me to actually forget that I am on the treadmill and I go to a much happier place, envisioning a beautiful trail on the side of the mountain.”

Collins claims he finds different benefits when he uses cannabis for outdoor activity. “Often times though when I am running outside I use cannabis for the exact opposite of ‘focus.’ Instead,” the athlete says, “I use [cannabis] to forget about times, pace, and I use it to thoroughly enjoy the run and forget about everything else. Cannabis allows me to feel immersed in nature and truly even forget how far I am running or how far I have run.”

Per the Word Anti-Doping Agency’s policy, all cannabinoids, cannabis, hashish and synthetic cannabinoids are prohibited in competitions, despite cannabis having been ruled out as a performance-enhancer under some observations. CBD was recently exempted from the list, however. Athletes of all types — such as snowboarder Ross Rebagliati — have called for WADA to reconsider THC as a prohibited substance.

Despite the conflicting nature of cannabis and the professional running world, Collins firmly stands by the beneficial effects of the plant and isn’t afraid to voice his opinion. While he doesn’t consume THC during races that restrict "IN RACE USE" of prohibited substances, or events that are subject to the scrutiny of the WADA, he commonly eats edibles during runs on his own time.

“I run high for about 75 percent of my runs,” Collins confides. He also adds that “I’ve never once thought about using during an ultra distance race. I feel more determined and focused when I am not high. I prefer to only get high on training runs, as I am much more alert without the cannabis. I’ve been drug-tested twice after Western States 100 and Ouray 100, finishing in 6th and 1st place, [respectively]. Passed both tests with flying colors.” 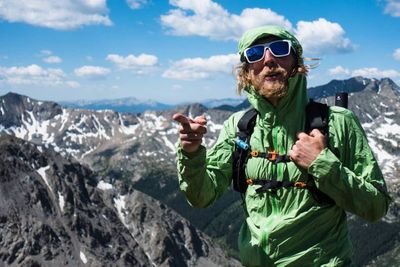 Author and runner Josiah Hesse is another major proponent of adding cannabis to a fitness regimen. “I think so much of running is a cerebral and emotional experience, often even more than a physical one,” Hesse explains to MERRY JANE. “The right headspace is as important, if not more important, than warming up or training hard. For me, cannabis helps keep me in the moment when running. I feel dialed in and hungry for each step.”

In an article for Esquire, Hesse took it upon himself to be his own guinea pig and test out the entire scope of the benefits and disadvantages of combining cannabis with long distance runs. “I think the neurological architecture of the ‘runner’s high’ and the ‘marijuana high’ are very similar, if not close to identical,” he tells us in an email exchange.

Hesse understands that for now, runners such as himself and Collins are the outliers in the professional running world, which is slow to embrace drastic changes like normalizing cannabis use. “Professional athletics is rooted in a profoundly conservative culture, and it'll be a long time before that changes,” Hesse predicts. “I think the Olympics incorporating snowboarding into its games is having an impact, but not one big enough for any dramatic shifts. I think we'll see legalization on a federal level before the WADA changes their policy.”

But for those who have seen the light, combining cannabis use and running can make all the difference. “After discovering the winning combination of edibles, music, and distance running, I learned that exercise can be as transcendent and euphoric as sex or dancing,” contends Hesse.

“It's the greatest high I've ever known. If not for my physical limitations, I'd be running several hours twice a day. It's what my whole day leads up to. In fact, I think I'll go do it right now.”

CBD
SPORTS
HEALTH
WELLNESS
MORE...
IN THIS STORY
CBD
Click to shop at our CBD store
Benjamin M. Adams
FOLLOW
Benjamin Adams is a freelance writer whose work has appeared in a slew of publications including CULTURE, Cannabis Now Magazine, and Vice. Follow Ben on Twitter @BenBot11
Share this article with your friends!
AD
By using our site you agree to our use of cookies to deliver a better experience.
Accept
Decline
MORE FROM MERRY JANE