Weed Rave's Halloween party — naturally (and brilliantly) named "Halloweed" — is taking place this Friday, October 25 in a former grow-op in downtown LA. In addition to the blockbuster lineup headlined by ghettohouse godfather DJ Assault, the three-room warehouse (again, a former cannabis grow!) will feature interactive installations and pop-ups from over a dozen brands, including Old Pal, Paradiso, Hi-Fi Hops, Gossamer, and Kin Slips.

Weed Rave was founded in early 2019 by cannabis and music journalist (and MERRY JANE contributor) Michelle Lhooq, who is the author of Weed: Everything You Want to Know But Are Always Too Stoned to Ask. 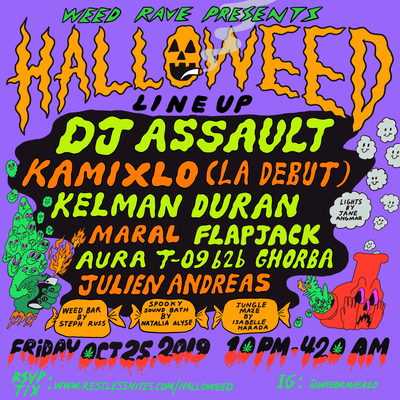 As Lhooq put it to MERRY JANE, "I'm so stoked to create every stoner's fantasy party with some of the coolest weed brands in the game — many of them run by dope women. Old Pal is bringing in their Cosmic Collider bus and stocking it with their brilliant cannabis rolling pouches. Paradiso is creating a garden paradise with everyone's favorite flowers. We're working with mixologist Steph Russ to create weed and energy drink cocktails made with Mondo, Hi-Fi Hops, White Label Mate, MatchaBar, and California Dreamin. Gossamer is giving out zines teaching people how to smoke weed properly. Our chefs are making infused grilled cheeses with Vireo's olive oil, and our VIP gift bags are stocked with treats from Kin Slips, Essential, Maven, and other sponsors!"

"California's nascent weed industry is endlessly fascinating, but it's still too insular and marketing-driven, and it needs to engage with real culture," Lhooq adds. "Weed Rave is a space for brands that we think are really cool to engage with artists, ravers, skaters, and other stoners who love weed — but might only know super mainstream brands like MedMen."

Lhooq explains that Weed Rave is a like a "social experiment" pioneering a new type of nightlife culture around cannabis — instead of alcohol. Fittingly, the rave ends at 4:20AM. 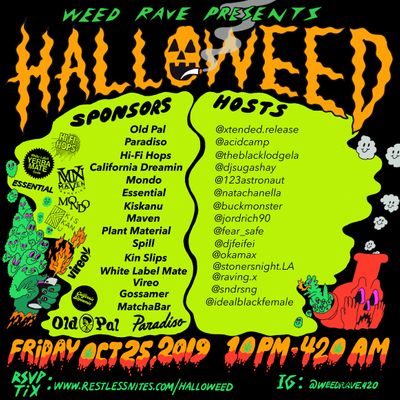 “Weed Rave Presents: Halloweed” is this Friday, October 25 in Los Angeles. You can get tickets here.

NEWS
CALIFORNIA
HALLOWEEN
EVENT
MORE...
MERRY JANE Staff
FOLLOW
MERRY JANE is based in Los Angeles, California and is dedicated to elevating the discussion around cannabis culture.
Share this article with your friends!
AD
By using our site you agree to our use of cookies to deliver a better experience.
Accept
Decline
MORE FROM MERRY JANE