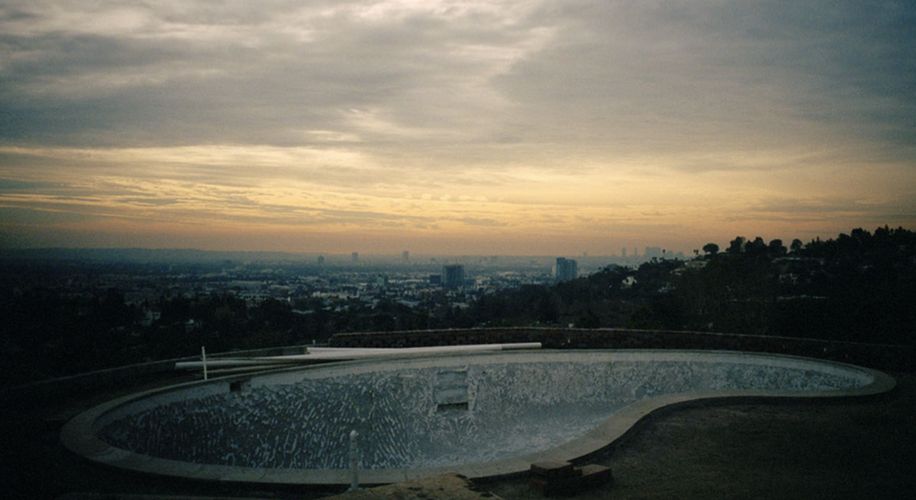 Tino Razo's new photo book 'Party in the Back' proves pool skating is as alive as ever.

Tino Razo's new photo book 'Party in the Back' proves pool skating is as alive as ever.

All photos by Tino Razo, courtesy of Anthology Editions

At first glance, photos of skaters carving up backyard pools while wearing high, striped socks might come across as anachronistic—a bygone pastime from skateboarding’s youthful heyday. But pool skating culture never really went away, and Tino Razo, a recent Cali transplant, has created a modern archive of this underground practice in all its glory and grit with his new photography book Party in the Back, published last week by Anthology Editions.

Shot on a series of 28mm cameras, Razo compiled photos from a few year’s worth of skate sessions with several friends in about 150 pools throughout Southern California. The 192-page book, sheathed in blank green canvas, features photos not just of skaters tearing up dingy, kidney-shaped pools, but also imagery of unadorned California architecture, the loneliness of abandoned homes, and a cityscape of small alleyways penned-in by backyard gates. There are even a variety of close-up shots highlighting the uncanny insignia designs that brand the sides of most pools.

Party is a project that originally began with no direction during a historic drought, inspired by lost days spent in empty pools under sun-beaten skies, with cold beers and flying skateboards filling the time. At first, Razo would simply shoot on his phone, capturing the daily vagaries of a secretive, illegal lifestyle. But after scrolling through a growing body of digital images, he realized there was something revealing there. Something good.

Soon, he dug out a 28mm film camera gifted by his late wife and began documenting the skate routines more seriously. And though he'd never completed a film project prior, photography is ingrained in skate culture, so Razo had no reservations about taking up a new craft. “It’s a big part of skate culture, so I thought, fuck it, I'm just gonna bring this,” he told MERRY JANE.

Skateboarding has arguably never been as widely embraced as it is today, with skateparks spanning the country, sponsored skaters developing (profitable) careers, and even celebrities like Lil Wayne embracing the culture. But the process of uncovering private, sometimes-secret pools is a subculture within a subculture. The thrill of discovering the spots, putting in the work to make them skateable, and being the first to christen them with beers and polyurethane is a hustle worth documenting as much as landing tricks, if not more so.

Considering the years of drought California had faced up until recently, it's easy to draw a connection between the empty pools and a lack of rain. But Razo points out that rich people are gonna swim if they feel like it, drought be damned. "Motherfuckers didn't stop," he said. "They wanted to swim in their pools, so they did." Therefore, many of the pools he documented were damaged, abandoned, or derelict, though there were instances of clandestine trespassing.

After combing over Google and Apple Maps and dropping pins on what looked like a viable series of empty pools, the photographer and his skate friends would go on trips to see what was skate-worthy. If someone lived there, they'd knock on the door and offer anything they had in exchange for the freedom to skate: clothes, beer, chores, weed, anything. “That only worked about a quarter of the time, though,” he added with a laugh.

At uninhabited spots, they'd sneak in the back and often spend hours cleaning mud, water, and debris from the pools with hopes of catching at least one session before the neighbors called the cops in. To drain the deeper pools, they were able to get their hands on electric and gas powered pumps. Other times, they'd have to get down in the mud and water with shovels and buckets.

"Once, somebody tore down an entire house and put the whole thing in the pool, so we picked out the pieces one by one for like six hours," he said. "We got to skate that once, but there were other skaters in the area who found out we cleaned it. They came the next day and spray painted it, which fucked it up for everybody and we never got to skate it again."

As for the police, the charges can be pretty severe. While Razo has heard of people serving jail time for trespassing, he's never personally been charged. "It's breaking and entering, after all," he points out. In fact, his biggest run in with the police was somewhat surreal. They were skating an abandoned old hotel, save a single old lady still living inside. She must have called the police, because they pulled up and ran Razo and his friends’ IDs. While in the car, the officers actually Googled the skaters. "When they found out that we were sponsored, they asked us to skate for them!" Razo recalled with a laugh. "They let us skate for a while and told us to hide the beers and then to leave after a while."

“Skateboarders want to skate stuff. Anything,” Razo explained when asked why pools attracted him and his friends. A simple explanation for a deep subculture, one the photographer proves is as vibrant as ever today.

'Party in the Back' is out now through Anthology Editions. Order a copy here.
Follow Mike on Twitter.

Mike Steyels would love to trade the pissy bus stops and copious pigeon droppings of New York for the palm trees and beaches of Cali, but could never give up the subway and bodegas. He likes Twitter.