CULTURE
The Ganja Grind: Five Iconic Weed Moments in Skate History
AD
With 4/20 approaching, we compiled a list of our favorite nug-friendly events, incidents, and inventions sparked by skaters.
Published on April 18, 2019

Every April, skaters around the country emerge from winter hibernation to celebrate the first weeks of spring and re-learn all of the tricks that were lost to months of freezing nights, bar stools, and bong rips. At the same time, weed lovers everywhere spend the same weeks preparing to celebrate the annual high holy day of 4/20 with a stocked head stash and mediocre excuses to take off work.

Here at MERRY JANE, we like to celebrate all of April’s seasonal glory, both on the board and in a blunt. And with 4/20 coming up this weekend, we’ve put together a list of our favorite weed-fueled moments in skate history, from puffy shoe stash pockets to a still-unmatched piece of skate journalism known simply as the “Bong Olympics.” So pour up the epsom salts to soak those sprained ankles, light up your favorite strain, and celebrate the intersection of spring’s two favorite activities.

For as long as skateboard journalism has existed, the profession has relied on a heavy dose of unprofessionalism to break up the monotony of the media industrial complex. At the height of skateboarding’s “anything goes” journalism ethos, SoCal skate mag Big Brother pushed the envelope long past a paper cut, publishing pornography, instructions for suicide, and other extremely taboo articles alongside photos of kickflips and tour recaps. The publication eventually spawned Jackass and the rise of MTV’s slapstick idiot generation.

In the mid-1990s, Big Brother, fueled by an office-wide cannabis habit and just the right amount of stupidity, published a call for readers to send weed through the mail so that the staff could compare the bud. And would you believe it, stoners from around the country packed nugs in envelopes and let it fly. To celebrate the newfound stash — and to settle the publication’s internal iron lungs champion — Big Brother hosted its first and only “Bong Olympics.”

Documented in the 1994 skate/debauchery video Shit, and the 2007 documentary The Man Who Souled The World, the Bong Olympics pitted writer vs. graphic designer vs. photographer vs. freeloader in a battle of quickest bowl clearing, biggest hits, inebriation endurance, and more. Big Brother was eventually sold to Larry Flint and folded under the “Hustler” umbrella, but the magazine’s legacy remains influential both in skate and mainstream pop culture. And for the record, we’ll take skateboarding’s Bong Olympics over skateboarding’s inclusion in the impending 2020 Summer Olympics any day.

Never meet your heroes. The adage applies to movie stars, musicians, and politicians — and there is certainly no exception for pro skaters. But while most instances of hero worship result in a super fan blown off by his or her icon, the same phenomenon can occur within the celebrity ranks. Sometimes, the result can lead to a legacy pro skater falling apart at the site of his airborne idol toking up.

In a 2012 episode of the Ride Channel interview series Free Lunch, longtime pro skaters and company owners Jeremy Klein and Tony Hawk told the story of an early Birdhouse tour where a young Steve Berra — another pro skater and the co-owner of skate content factory The Berrics — walked in on Mr. 900 smoking loud. The result? Berra began bawling in a full-on reefer madness fit at the sight of his hero breaking bad.

Berra has since garnered a reputation in skate circles for his connections to Scientology and his penchant for filming “street” tricks on manufactured obstacles. But the idea of a sponsored skater succumbing to tears at the sight of Tony Hawk smoking a joint is undeniably an iconic industry faux pas, and probably the hardest to live down. To make matters worse, Berra has kept up his anti-ganja stance, with a “no weed allowed” rule still standing at his famous private skatepark.

When shoe companies construct a new model for professional athletes, the goal is to tailor the footwear to the exact specifications of the given sports’ needs. This means crafting a blend of fashion and function, alongside the requisite padding, support, and materials viable for a mainstream market. For skater-owned shoe company éS, when it came time to make legendary ripper Chad Muska’s first pro shoe in 1997, brand strategist Don Brown and designer Frank Boistel paid special attention to Muska’s bone-deep love for weed.

And so with Muska’s first shoe — the very first skate shoe to crack a $100 price point — éS added an almost-invisible zipper to the top of the tongue, revealing a hidden stash spot designed to hide a dime bag. 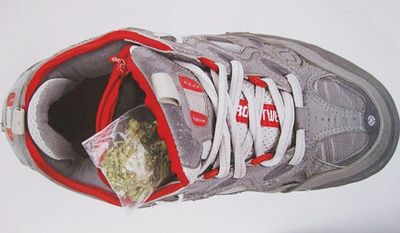 “We threw the stash pocket in the tongue because Chad was a heavy weed smoker at the time,” Brown told skate site Quartersnacks in an oral history of the shoe’s design. “It was a gimmick, but different than any other shoe.”

And if there wasn’t already enough of a connection between skateboarding and cannabis culture, Muska’s shoe made the correlation impossible to ignore. Stories began emerging of police pulling over skaters specifically to check their shoes, and newspaper reports warned parents about the sneaker’s hidden feature.

New batch of #OgBeagleKush Ready! Have your local dispensary contact @abs_951 or come visit if you're near 🔥💨 @weedmaps

These days, Baker, Deathwish, and Shake Junt skate filmographer Ryan “Beagle” Ewing is busy racking up millions of Instagram and Youtube views with videos of his tiny dog Murdy skating down stairs and grinding curbs. But before the VX1000 specialist and his pooch hit viral paydirt on the ‘gram, Beagle supplemented his skate videography paychecks with another side hustle: using his infectious personality and skate industry cred to brand his own strain of OG Kush.

OGBeagleKush, an exclusive strain from Green Team California, hit the shelves of California medical marijuana dispensaries in 2016 under the Golden State’s lenient Prop. 215 regulations. And, as far as we can tell, it was skateboarding’s first personalized pro strain.

Beagle immediately started pushing the kush on Instagram, hashtagging the strain name and posting videos of himself planting, trimming, and — of course — smoking his personal product. Judging by Instagram, the be-all and end-all source for skate news, it appears that OGBeagleKush has since departed the Cali weed market, but we’re pretty sure that hasn’t slowed down Beagle’s consumption rate. After all, it’s gotta take some strong grass to put your pet on a skateboard and start pushing him down flights of stairs.

Cory Juneau Gets Suspended From Competition for Dirty Urine

Next year, skateboarding will make its Olympic debut in Tokyo, Japan. And ever since the Olympic committee officially brought skating into the fold in 2016, it seems like everyone who’s ever stepped foot in a skatepark started asking the same question: “How are any of the world’s best skateboarders going to pass an Olympic drug test?” And for two and a half years, skateboarding’s cannabis obsession hung over Olympic team selections like an ever-present green cloud. Would skaters really be able to cut their hash habits? What would happen if a skater tested positive? Can WeedMaps sponsor the Olympic team?

Those questions were answered in January of this year when the U.S. Anti Doping Agency announced its first cannabis-related skate punishment. The agency disclosed that 19-year-old Southern California park skater Cory Juneau was suspended from competition for cannabis use.

Juneau, who appeared to be on the short list for U.S. Olympic hopefuls at the time, has since missed the cut for the 2020 games. But due to his first-in-flight trouble making, Juneau has still become a household name in skate communities, if only as “the first skater ever suspended for smoking weed.” It may not be a Wheaties box, but if you ask us, that title is just as cool as a gold medal.

420
SPORTS
CELEBRITIES
HUMOR
MORE...
Zach Harris
FOLLOW
Zach Harris is a writer based in Philadelphia whose work has appeared on Noisey, First We Feast, and Jenkem Magazine. You can find him on Twitter @10000youtubes complaining about NBA referees.
Share this article with your friends!
AD
By using our site you agree to our use of cookies to deliver a better experience.
Accept
Decline
MORE FROM MERRY JANE