CULTURE
Stoned Sex: How to Make Love on Magic Mushrooms
AD
Having sex while tripping on mushrooms is an experience that everyone should try at least once. Here's what you need to know about fornicating on fungi.
Published on August 12, 2019

For this week’s edition, we’ll be discussing the ins-and-outs of having sex while tripping on psilocybin-filled shrooms. Stoned Sex will be running every other week, so make sure to stay tuned for the next dose.

*Some names in this story have been changed to protect anonymity 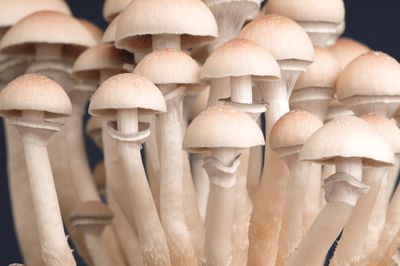 The liberation of psilocybin is upon us. Earlier this year, Denver voted to decriminalize magic fungi and activists are now lobbying congress to do so nationally. Shrooms aren’t having a moment; they’re reclaiming their rightful place at the table. So let’s address the most important question: What’s it like to have sex on them?

“Time slowed down and we could appreciate all the little moments of sex like we never could before,” said Judas Kane, a self-professed Atlanta-based hedonist, about having sex on 2.5 grams of magic mushrooms. “While we were inside each other, an iridescent fractal pattern would emerge.” 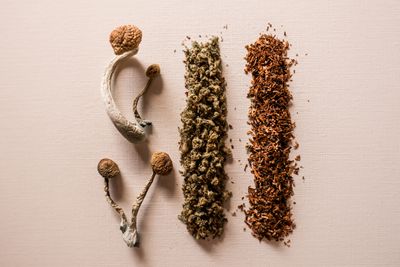 A trip can begin at a concert and unwind under the covers. Regardless of how or why mushrooms are taken, when tripping with a partner, I let them know that psychedelic sex is something I want to experience with them to ensure they’re on the same page.

“The number one issue with psychedelics and sex is consent and the ability of both partners to maintain appropriate boundaries by being able to express consent in a clear way,” said Brad Burge, the director of strategic communications for the Multidisciplinary Association for Psychedelic Studies. He notes that legally, you can’t consent on psychedelics because you’re technically not in a sober state-of-mind. But that doesn’t stop couples from having sex on shrooms with enthusiastic consent.

Once you hop on a mushroom ride, it’s impossible to know what lies ahead. If you happen to trip with a romantic partner on a camping excursion, or at a music festival (hey, sometimes you crave sweaty shroom sex), it’s smart to consider your intentions and boundaries before expanding your state of mind.

That’s because psychedelics usually produce profound experiences — for better or worse. For instance, a couple may merge in a realm of ego-disintegrating, ethereal orgasms. Alternatively, another sexy psychedelic encounter might cause one partner to become overwhelmed with the oddness of bodily functions, making them bug out. Bad trips happen. And considering how intimate sex is while sober, adding mushrooms to the mix raises the stakes.

“Talk about it beforehand to discuss intentions and boundaries,” said Michelle Janikian, the author of Your Psilocybin Mushroom Companion: An Informative, Easy-to-Use Guide to Understanding Magic Mushrooms. “When you’re actually tripping it will just make everything go smoothly so everyone is on the same page.” 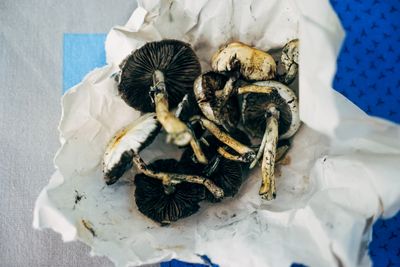 Before we go any further, let’s be real about something: strangers will fornicate while tripping balls. It’s human nature. And there’s nothing wrong with making magic mushroom love to a sexy mermaid you met in the dust at Burning Man. Just be sure to check in with each other before the drugs hit, and understand that while this is a new partner, there may be nothing casual about the sexual experience. “These drugs can enhance intimacy in a way where people can learn a lot about each other at a deep level very quickly,” Burge said.

What would normally be a casual encounter can transform into feelings of love and connection when psychedelics are involved. You may end up marrying your Burner mermaid, or leave with immense gratitude for the experience. Or, it’s possible you’ll have a harsh reality check. Maybe you realized you're deeply in love with someone else (your ex, your main squeeze, or your 4th grade lover who came back into your life last Mercury Retrograde) and you're suddenly not in nirvana anymore. Understanding that shrooms facilitate intimacy — in a way other substances, like alcohol, simply do not — will better prepare you for potentially heavy comedowns.

“The bond with partners strengthens due to the intimacy of such an intense and out-of-this-world scenario,” said Starla*, a 37-year-old woman who enjoys sex on shrooms. “This was a singular moment that will be like no other time we will witness again. Not together, not with anyone else. It stands alone in your memory of lovemaking, often marking steps toward a better understanding of how we fit together.”

Couples also report falling in love while porking on psilocybin. Colin*, a musician in California, recalls having sex while camping with a new partner. It was pouring rain and they were the only ones at the campground. They each consumed 1.5 grams of psilocybin.

“It was like the entire universe became her lips, and the closeness of her body, even through our rain jackets, was incredibly stimulating,” Colin said. “I knew that I loved her in that instant, and I'd never felt so connected to someone. We quickly made our way into the tent to continue.”

While Janikian was researching her book, she said many couples reported falling in love on shrooms. “You know how they talk about psychedelic therapy being ten years of therapy in one day?” she asked. “I feel like if you trip with someone it can be like six months of dating in one day because you get to know them on this new level.”

Janikian says a moderate dose for facilitating connection is somewhere between 1.5 and 3.5 grams of dried mushrooms. She notes, however, that tripping with someone at all increases the likelihood of a quick intimate connection. 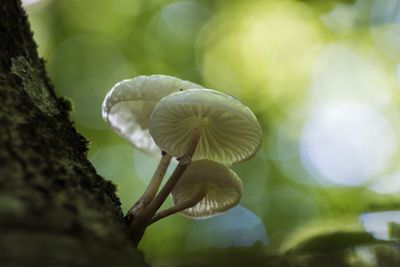 Dose Matters — So Does Set and Setting

Some people reading this may feel that sex on shrooms is absurd. It’s hard enough to pee while tripping, let alone going balls deep. But keep in mind that you don’t have to consume a heroic (or more than 3.5 gram) dose.

“If you take a moderate dose, it’s probably going to be fun and keep you present in your body and with your partner,” said Janikian. “If you’re at a higher dose [around 3 grams and above] you might feel overwhelmed or very vulnerable. With so much sensation the thought of having sex on top [of tripping hard] can be too intense.”

She suggests starting with less than three grams. For those interested in the therapeutic benefits of microdosing, starting with a tenth of what would produce a hallucinogenic experience (which usually happens around 3.5 grams) is suggested. A popular low dose is between .25 and one gram. You can always take more, but start low and go slow.

Combined with the dose, the environment in which you trip also plays a crucial role in the experience. For instance, Colin’s life-altering mushroom sex experience was undoubtedly influenced by the beauty of a campground and a rainstorm.

Marisa*, an artist living in New York, said she had one of the best kink experiences of her life thanks to psilocybin. It was at a play party held on a boat, and she was consensually flogged by a cat of nine tails whip while shrooming.

Researchers at Johns Hopkins say that there’s a distinct synergy between setting and proper dosage. Take a moment to recall the best sex you’ve ever had. Chances are it was with someone you were really into and in a comfortable or exotic setting, such as on vacation. The same concept can be applied to psychedelic sex. Mushrooms amplify everything — both the good and the bad. So, a comfortable setting in which you’re safe and relaxed is essential for a good trip.

In addition to the drugs and a nighttime boat, Marisa had a companion with her throughout the night ⁠— a good idea even if you’re playing with others. “I was in a very safe and caring environment,” she said. “If I hadn’t had someone with me, I wouldn't have had that same experience.” 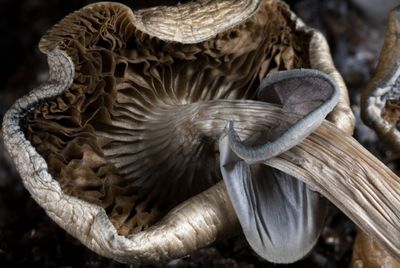 You don’t just feel things when you’re on mushrooms. They make you psychically understand and absorb your surroundings. So, while Judas Kane typically is a top, a mushroom trip inspired him to switch it up. “It allowed me to relax into and enjoy bottoming more, and I spent significantly more time doing it than I would otherwise.”

Kane also explained that colors became more vivid throughout his encounter. “I could see the beads of sweat on my lover’s body and how the lights in the room refracted through them. I could see every beautiful micro-expression on his face.”

He also reported a heightened sensitivity to sound. “I could hear every instrument, every synth in the music playing individually, how the sound echoed off of each of the walls, and how our breathing and panting eventually matched the drums of the track.”

And, of course, Kane’s sense of touch was also amplified. “I could feel his pulse everywhere along his body, but particularly when we’d take a break from actively fucking and would lay there, inside of each other.”

All these sensory changes melted into one another to form a sexy, cohesive experience.

Fucking on fungus can make sex so great that you fall in love while stuck in the rain. It’s also an experience that shouldn’t be taken lightly. Consent, boundaries, dosage, setting, and companions must all be considered. Since shrooms are safe — so safe they’ve been dubbed the safest drug — the biggest risks are psychological. However, if you start small and get it on with someone you trust, psychedelic sex offers a cosmic way to level up in relationships... and orgasms.

SEX AND ROMANCE
CULTURE
MAGIC MUSHROOMS
PSYCHEDELICS
MORE...
Sophie Saint Thomas
FOLLOW
Sophie Saint Thomas is a writer based in Brooklyn. She was raised in the U.S. Virgin Islands. Along with Merry Jane, her writing has been published in VICE, Cosmopolitan, Marie Claire, High Times, Nylon, Playboy, GQ, Harper's Bazaar and more. Brooklyn Magazine included her on their annual 2016 30 Under 30 Envy List. Her favorite strain of weed is Grand Daddy Purp.
Share this article with your friends!
AD
By using our site you agree to our use of cookies to deliver a better experience.
Accept
Decline
MORE FROM MERRY JANE