In an online forum for kink and cannabis enthusiasts, I asked for suggestions on how to enjoy what’s known as forced intox. “Give your sub a choice of several capsules, maybe one with MDMA, one with a couple of hits of blotter acid, and one with 2C-B,” Satrazon, as he goes by in the kink community, suggested to me. “They should all be filled the rest of the way with sugar, so it's not obvious which is which. Slowly bind the sub to a St. Andrews cross then ask, ‘How are you doing?’ You can reward correct or incorrect guesses however you like. A bong rip could be a nice reward or punishment, too.”

I wanted to stick with cannabis, and didn’t even have the necessary supplies to try the kinky psychedelic wheel of fortune, but this set me up to dive into the world of forced intox. I’d eventually even try it while sick with the flu. But let’s step back a little before we fill your brains (and lungs, and other orifices) to the brim. 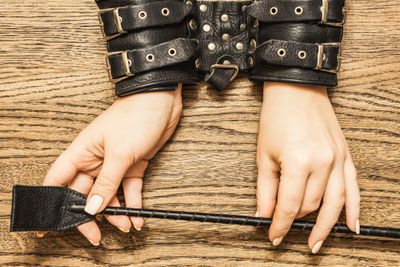 What Is Forced Intox?

How Is Forced Intox Practiced?

There are endless ways to enjoy forced intox. Kink is a creative sport. If you don’t have a St. Andrew’s cross or a plethora of substances at your disposal, you can integrate cannabis as a “punishment” for many scenes. The gas mask bong, in particular, is lusted after, as it matches BDSM aesthetics. “They look really cool, but in practice, I found it hard to use as an instrument of D/S play,” added Satrazon. “It’s a great way to get high, but forcing it on someone often leads to a lot of coughing and discomfort.” He added that other subs may enjoy such discomfort, but it wasn’t his cup of tea. His preferred method of intake during forced intox scenes is through ultra-potent vape pens.

The first time I enjoyed forced intox myself, a dominant partner “forced” me to take a dab. (Hi, dab daddy.) In our pre-negotiated scene, I asked daddy sweetly if I could take a dab. If I was good, like any good caregiver, he would set up the dab ring, scrape me a perfectly dosed dab, and break out the torch. All I had to do was lift my head and inhale at his orders. If I was bad, I wasn't allowed to take a dab.

We practiced penetrative sex the same way: I had to beg for it, and only got it if I was good. For this particular play sesh, I wasn't tied up. It was more about the roles and power dynamics of one partner being a "daddy" and myself the "little girl" than it was about bondage or physical play.

By the end, I had taken dozens of dabs! Too many to count! It was delightful, and this practice is part of why my tolerance is so high these days. Again, everything was pre-negotiated, and I would have used my safeword if I was too high. From the torch used to light the dab rig, to the intensity of a concentrates hit, I found this approach to the kink truly titillating. But that’s just the tip of forced intox.

“I will do predicament-type situations,” Mistress Matisse told me. “Like, ‘You’re going to smoke this or vape this or else I’m going to do X to you,’ and X is some terrible thing. So they do what I say.”

While many scenes include the quick bam of a bong, vape, or dab, other subs prefer the slow crawl of an edible. “Some people enjoy when the loss of control comes slowly,” added Mistress Matisse. 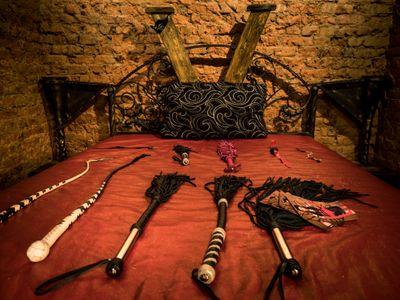 What Other Safety Precautions Should I Take?

As with any kink scene, all parties should pre-negotiate everything. That includes safety words, what the scene entails, hard limits (anything that’s an absolute “no”), and, with cannabis, the sub’s tolerance level.

“Negotiations have to include questions like, ‘Do you use cannabis regularly?’ Some people never have had a meaningful experience with cannabis at all. So they are trusting me to be their guide and make sure that they are safe and don’t come to harm,” said Mistress Matisse, who added that Washington State’s regulations for cannabis labeling makes it easy for her to gauge a small, medium, and large dose.

While dommes must be extra observant of their sub, submissives have a responsibility to be honest, open, and realistic about their tolerance levels and desires.

Can Anything Be Kinky?

While my first experience with forced intox was a success (thanks again, dab daddy!), I later desired to continue exploring the kink with my hot, awesome girlfriend. I wanted her to tie me up, feed me dabs, and then do whatever she wanted to me (consensually). Dabs really won my heart. But unfortunately, my deviant desires were stolen from my grasp as I came down with a terrible case of the flu.

Thankfully, I have a thing for medical play, and was down to get creative. I am not a medical doctor, but when I am sick or injured in some way, I often eat low-dose edibles. I find that THC works as a better painkiller than anything from the pharmacy, and is undeniably a safer option than opiates. I stick with edibles or a tincture to leave my lungs alone.

As Mistress Matisse reminded during our conversation, no one has died from cannabis. So, my girlfriend was down to be the “doctor” who “forces” me to take my medicine (delicious edibles) as day turned to night. Was it sexy? I didn’t feel sexy, because I was sweating bullets, then experiencing chills, and was in the same grey sweatpants and Marilyn Manson tank top I’d been wearing for days. But it was ultra hot to have her feed me edibles (and later, soup).

A cool thing about kink is that it doesn’t have to involve penetrative sex, or oral sex, or anything we were told not to do in high school. Kink encourages people to use creativity to consensually explore what arouses us — from sitting on cakes, to a dominant partner “forcing” their sub to take bong rips. Are you a kinky cannabis user? Throw in some forced intox into your next scene and see how it feels.

HEALTH
SEX AND ROMANCE
HUMOR
CULTURE
MORE...
Sophie Saint Thomas
FOLLOW
Sophie Saint Thomas is a writer based in Brooklyn. She was raised in the U.S. Virgin Islands. Along with Merry Jane, her writing has been published in VICE, Cosmopolitan, Marie Claire, High Times, Nylon, Playboy, GQ, Harper's Bazaar and more. Brooklyn Magazine included her on their annual 2016 30 Under 30 Envy List. Her favorite strain of weed is Grand Daddy Purp.
Share this article with your friends!
AD
By using our site you agree to our use of cookies to deliver a better experience.
Accept
Decline
MORE FROM MERRY JANE