CULTURE
Skate Diaries: What a Trip to Humboldt Taught Me About Skateboarding and Weed
AD
MERRY JANE's Eunice Chang took a road trip up to Humboldt County where she slept on a (legal) weed farm and talked to the highest women in skateboarding about the intersection of boards and bud.
Published on October 24, 2019

All photos courtesy of Michelle Mendoza

Hi, my name is Eunice Chang, and I’m a full-time employee at MERRY JANE. I’m an avid skateboarder and recently had the opportunity to go on a 14-hour road trip from Long Beach, California to Humboldt County, jam-packed in a van full of badass women skaters. Truthfully, I’ve never had a wilder experience or been so fucking stoned in my life. And I’ve had my fair share of skate trips — you know, where we camped outside skateparks, slept in skate bowls, and woke up to the smell of feet hotboxing the tent. Super sexy times, obviously.

But having only traveled with men, the idea of traveling with girls whose Instagram profiles I’d secretly been lurking-on for years was a little intimidating. But it ended up being one of the most epic, memorable journeys of my life thus far. So, that’s why I’m writing this: because there’s a synergy among skating, travelling, and weed that’s unparalleled in this life.

And, maybe you can join the fun next year, when the Humboldt Skatepark Collective hosts its annual “Holiday in Humboldt” skate contest and fundraiser. It’s worth going not only for the guaranteed good times, but also because all the money raised by the non-profit is put toward building new skate parks in Humboldt County. 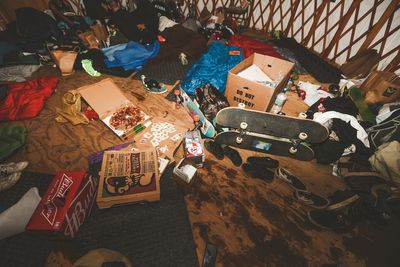 This is the girl's skate yurt.

This year, Emerald Queen Farms — a beautiful 90-acre sun grown farm located miles up a random dirt road in lord-only-knows-where Humboldt County — drove, fed, and lodged two vans of lady skaters to attend the contest and make it one hell of a skate party. The kind team at the grow site had a giant yurt set up for us to sleep in — they called our skate crew the "Emerald Queens." And, after four days of yurt camping and six days of non-stop skating, my one takeaway is that women’s feet smell just as rancid as dudes' feet.

The yurt was located right next to a maze of weed plants that stood about 12-feet-high. Walking around outside was like an aromatherapy session: All you had to do was smell the weed in order to feel relaxed. The idyllic weather also added to the magic of the weekend.

It felt like we were at summer camp for adults. Every meal was prepared for us by chefs, so everything we ate was dank AF. But the breakfast spreads were always the most memorable. We woke up every morning to giant boxes of freshly picked fruit for us to enjoy, plus ripe avocados, toast, pancakes, and lots of coffee. The other meals we ate were probably really fucking good, as well, but, honestly, I was too high to remember.

So, between the 14-hour drive from Long Beach to Humboldt and spending six days together, there was a ton of time to get to know my fellow skate queens. And since skateboarding and weed share a long, beautiful history, I thought it would be interesting to get real life stories about how these women in skateboarding incorporate weed into their active lifestyles. 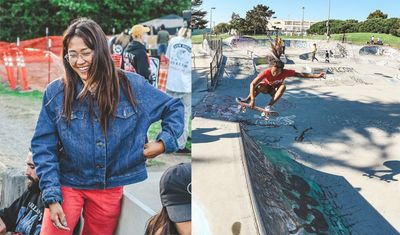 Janthavy Norton is a 23-year-old skater from Phoenix, Arizona. She discovered that skating was her passion when she was 17, and she’s been going hard ever since. Norton says that smoking weed helps her sleep at night, so she often medicates before going to bed. But she also enjoys smoking with her friends, too — like when she’s on crazy weed skate trips. As of lately, she says she's been smoking everyday.

“My preferred [consumption] method is probably through a vape pen or joint,” she said on our trip up to NorCal. “I feel like I can handle those a little bit more for some reason. I feel like I don’t get as high, whereas smoking a bowl of flower can get me a little bit too baked. Joints and vapes are more mellow.”

Norton also explained that cannabis helps her with the physical and mental parts of skating. “If I smoke before I ride, I feel like I skate a little better because I zone-in and don’t pay attention to much else.”

She also says that cannabis helps her be more open about trying new tricks, which is one of the mental challenges of skating. “After I smoke, I’m less in my head about trying different things,” she said. “Most of skating’s mental, so when I smoke I can let go of my fears. And, physically, it calms me down.”

Norton explained that she used to be on a CBD regimen due to a gnarly hip injury. Pain shot through her hip while she worked and stood for long periods of time. Then she started taking CBD and it helped alleviate that. “It kind of just disappeared,” she said. “It was tight!”

“I think cannabis is very beneficial,” Norton added. “It’s not for everyone though. Some skaters get anxiety and can’t perform. For me, I get into a good zone and focus on my tricks and just have fun.” 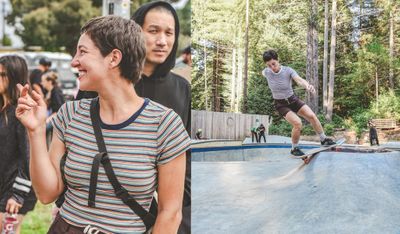 Marissa Martinez is another skater who “enjoys the occasional zoot," she said modestly during our interview. When I think of stoner skaters, Marissa is always the first to come to mind. There wasn’t a moment the entire trip where she wasn’t holding a joint or spliff. She’s from Los Angeles and has been skating for about 15 years.

“Weed helps me relax after a long day in the field,” she said. “My favorite strain is Blue Dream from Jungle Boys. I use CBD tinctures, ointments, and bath bombs to speed up healing time from injuries on and off the board, too."

She explained that weed helps her a lot post-ride because each skate session offers a new way to get hurt. “My mama always said skating was like a box of weed: You never know what ya gonna get!” 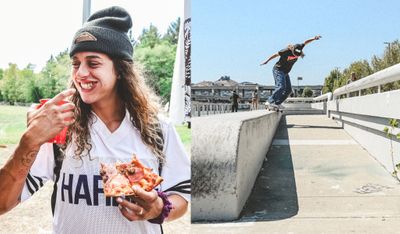 Devan Predas is a skate queen from Toronto, Ontario, Canada who’s been skating for 17 years on-and-off. “I’m a foreign bitch, you know!” she said, while laughing and rubbing CBD salve on her bruises.

Predas has a unique perspective on the cannabis industry because it was federally legalized in her country last October. But legalization isn’t always what it’s cracked up to be, especially when it’s first rolling out.

“It’s actually been super fuckin' wack,” she said. “In Toronto, they only gave out one [government-approved] licence for a [dispensary] in the whole downtown area, which is fucking huge. So, there’s usually a line that wraps around the building for three blocks just to go in there. Everything is super fucking expensive, too.”

Gallery — Skateboarding and Weed Are Like Peanut Butter and Jelly:

Since then, Toronto has tried to rectify the situation by issuing 20 more licenses. But they didn’t fix it entirely. All of the cannabis shops that inevitably became illegal (despite trying to obtain licenses) were barricaded by huge concrete blocks.

“It was crazy!” said Predas. “Then, one of the shops removed the blocks and ended up winning a license in the lottery, so they ended up staying open. So stupid.”

The Canadian skater has been smoking weed since she was in high school. Despite using the plant regularly, Predas says weed only sometimes helps with skating — other times, it doesn’t. “I could smoke right before I skate, and I’ll be high for the first couple of hours. And then I won’t smoke the whole rest of the sesh. It just depends. I used to not like smoking and skating, but now I feel like it does make me focus a little bit more.”

Along with hella bong rips, Predas also says she uses CBD all over her body. In fact, during our interview, she liberally applied a ton of CBD salve. “I just rubbed some all over my knee, my hip, and my elbow. But I also use it for cramps.” 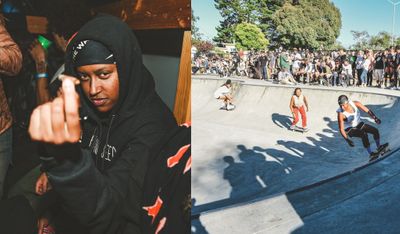 Christina Smith is from Detroit, and has been skating since she was 11 and smoking since she was 16. Although she describes herself as a weed purist, Smith also enjoys blunts — “I just like the taste of the Backwood burning,” she said. “Bongs are great, too. Bongs and blunts for me.”

Smith says that cannabis played an integral role in her most recent knee injury. In October 2018, she tore her ACL, meniscus, and fractured a bone.

“After my surgery, I ended up getting some topical CBD stuff that really, truly saved my life,” she said. “I apply it, then massage my knee, and it helped a lot. I also use the pen and tincture things. But ya know, I like THC, too.” 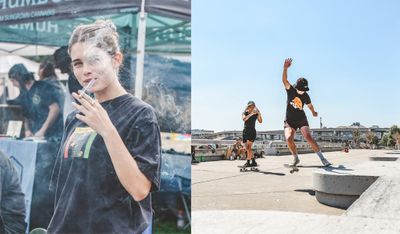 The group that Emerald Queen Farms brought together wasn’t just a bunch of Yanks, thanks to Aimee Gillingwater, who’s from London, England. She’s been skateboarding for five years and says that she only puffs on CBD flower.

“CBD greatly helps with my skateboarding,” she said. “It helps when I fuck up my muscles or get injuries. I can get it in oil forms to help speed up the recovery pace, but it just really helps with the pain, as well.”

Gillingwater says that CBD also greatly helps with menstrual cramps and having the strength to try to skate through them. “[It really helps on] those days when you’re trying to skate at the park and your whole body is cramping for no fucking reason apart from the fact that you were born with a uterus. And when you’re just out there trying to do your thing, havin’ a little bit of CBD oil really makes a difference, you know?”

But getting cannabis in the UK isn’t easy. Thankfully, however, laws and perspectives around weed and it’s healing properties are starting to shift across the Atlantic. Gillingswater says she gets CBD from her local skateshop called Brixton’s Baddest. “They sell CBD oil and tablets, so you can have it whichever way you want to help with recovery. But it’s cool to come out here 'cause you get all the good creams that haven’t quite got to the UK yet. Out here in California, there’s really good medicinal CBD stuff.”

Gillingswater says Holiday in Humboldt was wild because it’s way different than any event available in the UK.

“It was very family-friendly, and it made it feel like weed wasn’t the crazy 'devil's lettuce.' It proved that you can be normal and smoke weed. I think alcohol destroys far more lives than marijuana does. It’s nice seeing weed being treated well, because I feel like it should be accepted a little bit more and treated with more respect. People will then use it with more respect.”

Basically, what this trip taught me is that weed rocks in a lot of ways. It helps people, including athletes and skaters, feel better when they’re sore or injured, and it helps with mental and physical creativity. It’s the perfect natural medicine to enhance any skater’s life. And that was the vibe at Holiday in Humboldt: appreciation for the benefits of the plant. There was a shining spotlight on the intersection of women, skateboarding, and weed that weekend, and the future looks bright for them all.

SPORTS
SKATEBOARDING
SKATERS
SKATE TEAM
MORE...
IN THIS STORY
CBD
Click to shop at our CBD store
Eunice Chang
FOLLOW
Eunice is a full time coder at MERRY JANE, dog mom, and ultimate skateboard cool guy. You can follow her @notcheetos on Instagram for shred-fully awesome skate videos and wisdom.
Share this article with your friends!
AD
By using our site you agree to our use of cookies to deliver a better experience.
Accept
Decline
MORE FROM MERRY JANE