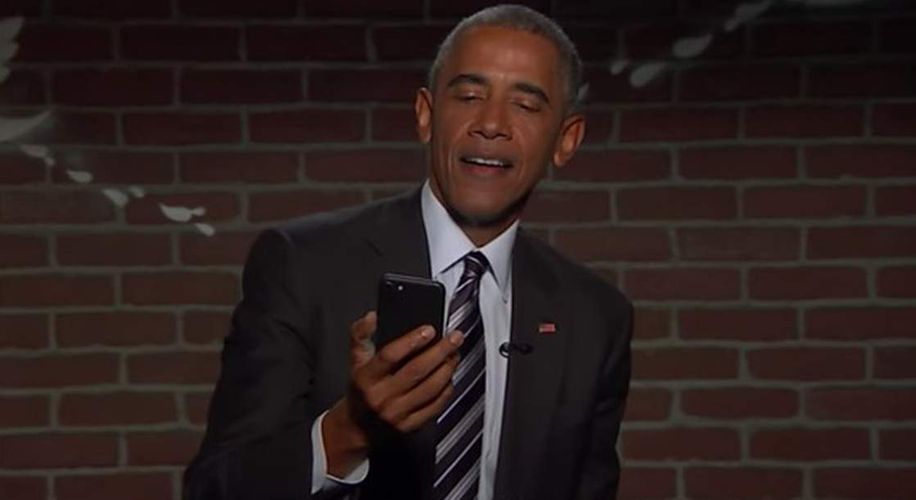 The Commander-in-Chief joined "Jimmy Kimmel Live!" to read a collection of 140-character disses, the last of which came from none other than Donald Trump.

The Commander-in-Chief joined "Jimmy Kimmel Live!" to read a collection of 140-character disses, the last of which came from none other than Donald Trump.

As the United States continues to suffer at the tail-end of what is statistically one of the least popular presidential elections of all-time, a majority of us have been finding solace in the humorous demeanor of sitting president Barack Obama. Not only has Obama commuted a record-breaking number of prison sentences, most of which were for drug-related offenses, he’s also lightened up the mood of this impending election as his final term comes to close.

On Monday night, Obama returned to Jimmy Kimmel Live! to read a collection of mean-spirited tweets about for his last time as President of the United States. Back in March, the president had joined Kimmel’s show to do the same “Mean Tweets” segment, which calls on various celebrities to read hilariously spiteful tweets about themselves aloud. This time around, at the end of the skit, Obama read a Twitter insult from a familiar foe, one who happens to be vying for his seat in the Oval Office.

Most of the 140-character Twitter insults read during the segment ranged in hilarity, from "Barack Obama is the Nickelback of presidents" to "Barack Obama is the sharknado of presidents. Loud, stupid and over-hyped! #sharknado4." When someone questioned “bro, do you even lift!?” to the president, he responded playfully by claiming “well, I lifted the ban on Cuban cigars, that’s worth something.”

The last ‘mean tweet’ of the segment came from @realDonaldTrump, the official account of the Republican presidential nominee, which stated "President Obama will go down as perhaps the worst president in the history of the United States!" Obama had the perfect retort to Trump’s tweet, responding “Hey, @realDonaldTrump, at least I will go down as a president." The suave and calm Obama then proceeded to drop the smartphone as if it were a microphone and strut away with presidential swagger.

Still, the light jab at Trump pales in comparison to the more serious and pivotal rhetoric recently coming from the president and his wife Michelle Obama while campaigning for Democratic hopeful Hillary Clinton. All in all, as funny as the latest “Mean Tweets” segment was, there was a tinge of palpable sadness watching Obama walk off the Jimmy Kimmel Live! stage, knowing damn well that it would be his last time doing so as our cool and collected president.