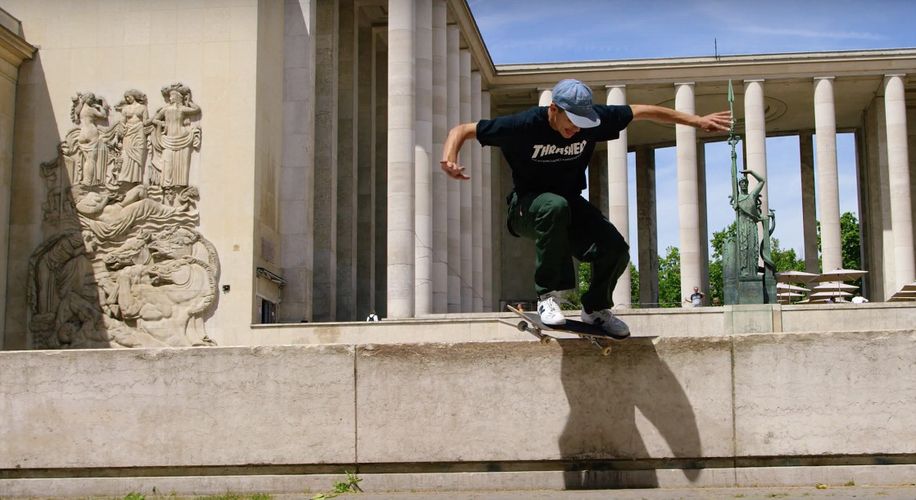 A good skateboard film is very similar to a good movie, and in general, tend to begin the way they began. In the case of Tricolor, New Balance Numeric’s brand new feature length flick begins with a strong opening montage that finishes what most people would consider a video ender. It also does so by welcoming their latest team member, the incredible high-popping Brandon Westgate. Seriously, using pseudo-bump to kickflip over a chest-high chain linked fence is a hell of a way to start a video. This, along with the syncopated team member intro could’ve closed things out and we would have gone our way as happy campers, with absolutely no complaints. But wait, there’s still an entire video to follow!

Following the intro, we find out that the video’s title is actually alluding the thematic proportioning that it’s divided into—three. The super stylish, versatile and eclectic shredder man-boy Franki Villani kicks off the individuals “parts” part of the video, and the legendary PJ Ladd ends the darn thing. Sandwiched in between is French rider Flo Mirtain’s flowy (yes, flowy) technical wizardry, which is amusingly accompanied by a poke at the language barrier between him and his American teammates. Then there’s action from every team member in between including amazing feats by Jordan Taylor, Chad Tim Tim, Marquise Henry, Arto Saari, JP Souza, Marius Syvanen and Levi Brown to name most, but not all. There’s just so much crammed into this 20 minutes of skate continuum.

Purists can fuss all they want about the lack of edge, spontaneity, and aesthetic chance in present-day skate productions, but they certainly can’t argue with Tricolor. It’s a polished vacuum of nonstop, meticulously edited and well-photographed spots and incredible skateboarding. Not only does it look good, but it also jams well too thanks to an airy soundtrack of cuts, and even a Bhangra-esque ender track for PJ Ladd’s rhythmic and flip trick godliness.

Hindi deities, stop what you’re currently doing and please take us to skate nirvana right now. We don’t care who you pray to, because this one right here is goodness for all the skate souls out there!