CULTURE
Mz. Neon Brings Her "Pussy Stick" to “About That Time”
AD
The bicoastal rock star brings the spirit of punk to our SoCal studio to dish on trans femme energy, fad diets, McDonald’s meals, and foot fetishes.
Published on June 25, 2019

Mz. Neon is a rock star in the truest sense of the word. A Boston-based punk with roots in the hardcore scene, Neon has dipped her toes into acting, DJing, production, and now, a brash foray into rap that’s putting all your preconceived notions on notice.

A bicoastal staple in the underground world of glam and disco, Neon began making a name for herself as early as high school, touring alongside bands like H2O and the Mighty Mighty Bosstones. Since then, Neon has paved her own glistening road through the music industry and beyond, all while holding strong to her punk history.

Her latest single, “Pussy Stick,” is Neon’s first, but certainly not last, hip-hop track. An unapologetic ode to trans femme sexuality featuring heavy-fisted lyrics like "Dick hard in a thong like a champion/ Never strapped on,” Neon doesn’t pull punches as she targets “the motherfuckers who did me wrong.”

“Pussy Stick” is the first single off of a new upcoming project that promises to push our conceptions of genre the same way Neon pushes mainstream gender norms. Now based in LA, Neon’s meteoric star is rising fast. 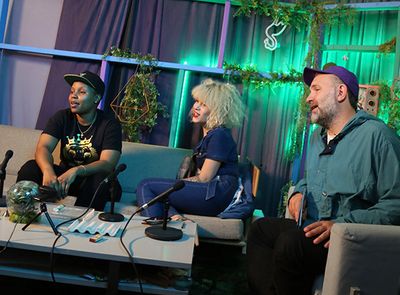 At MERRY JANE’s SoCal studio, Mz. Neon found a spot among our critter clique to discuss her longtime fantasies of a trans rapping alter ego and her ability to finally bring that person to reality after transitioning three years ago. During “Posted Up,” we dug through Neon’s Instagram to find stories of glamorous foot fetish photoshoots, selling soda with sexuality, and her dominant stage presence.

After a word from our friends at Loon vape pens, we rolled the news and about how confident drivers feel after sparking up, beautifully ugly dogs, and the wrong kind of flying animal ending up on a Buffalo Wild Wings plate. And, of course, it wouldn’t be 4:20 without “Astrology Time,” where we dimmed the lights and got in touch with Neon’s Libra spirit, which may or may not support rollercoaster romance and fad diets. 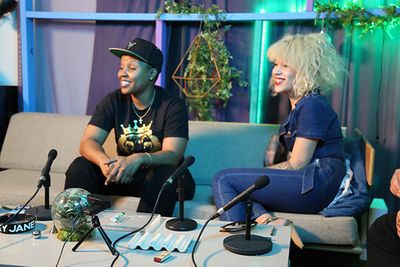 For more from Mz. Neon, keep your ears peeled for more new music of all genres coming soon, and follow her on social media to stay updated on upcoming performances and appearances. And be sure to check back in with MERRY JANE every week for new episodes of About That Time.

MUSIC
CULTURE
ABOUT THAT TIME
FACEBOOK LIVE
MORE...
MERRY JANE Staff
FOLLOW
MERRY JANE is based in Los Angeles, California and is dedicated to elevating the discussion around cannabis culture.
Share this article with your friends!
AD
By using our site you agree to our use of cookies to deliver a better experience.
Accept
Decline
MORE FROM MERRY JANE