CULTURE
Marijuana Muzak? An Inside Look at How Pot Shops Curate Their Soundtracks
AD
What you hear when you’re shopping for cannabis may be more important than you think. For many dispensaries, the music playlists offer a window into an operation’s overall philosophy and ethos.
Published on July 11, 2019

What’s the first thing you notice when you step inside a dispensary?

Once upon a time, it was likely the aroma of cannabis beckoning you in like Pepé Le Pew. Sadly, new regulations in states like California now stipulate that flowers and customers be kept at somewhat of a distance from one another. This doesn’t mean you shouldn’t expect to smell a little something, but the overpowering aroma of quality cannabis isn’t wafting out the door like it used to.

Perhaps your focus goes immediately to the décor, be it an upscale, Apple Store aesthetic or the nature-laden coffee shop vibes found in businesses like San Francisco’s Grass Roots. The way a dispensary’s counter and customer flow are arranged are things one might scope out at first glance, but there’s another sense being triggered every time we visit our neighborhood pot shops, as well.

The importance of music to the retail experience is a well-documented phenomenon.

In 1999, researchers discovered that customers at a wine shop were more likely to purchase French wine when French music was played, but purchased more German wine when German music was on. Perhaps most intriguingly, these shoppers seemed to have no awareness of what was playing when later asked about their experiences. Other research has further legitimized the hypothesis that music may have a tangible effect on our purchasing habits — whether we realize it or not.

Over 20 years earlier, business professor Philip Kotler gave a name to the concept of curating a retail experience through sensory manipulation, dubbing the practice “atmospherics.” Atmospherics dictates what the width of aisles in a supermarket should be in order to maximize sales. They also tell us about ideal temperatures, how different lighting configurations affect shopping patterns, and much more. The songs we hear in a store play a vital role in this concept, as well, with the pace of a track often serving as a subliminal metronome for how quickly we should browse a given store. In fact, the entire concept of “Muzak” —  background music tailored to soundtrack consumer experiences— is a manifestation of atmospherics, too. (Like Band-Aids and Kleenex, Muzak is both a brand and a commonly used term to describe the generic product.)

In many ways, the primary goal for regulated dispensaries is simply to assimilate. In some cases, that may mean opting for a subtle exterior that doesn’t betray the nature of the business within. It may also take the form of gentrification, with dispensaries opting to take the lead on efforts to bring new businesses to a destitute area of town.

There is, however, at least one facet of retail for the cannabis industry that appears to be less about fitting in and more about standing out.

Of all the atmospherics available to a dispensary in terms of how it defines its character (and entices its customers), the music playlists utilized during business hours can offer a remarkable window into an operation’s overall philosophy and ethos. 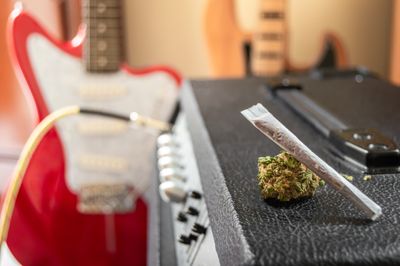 For Elise McRoberts — Chief Strategy Officer at ECO Cannabis, a new brick and mortar dispensary on Telegraph Avenue in Oakland, CA  — it’s simply impossible to separate joints and jingles. Her music-related tattoos may outnumber her pot tattoos by a ratio of three to one (and her dog may be named Miss Axl Rose), but if McRoberts were forced to rank her passions, it’s likely that music and cannabis would tie for top honors.

“Let's be honest,” she said in a phone call with MERRY JANE. “Artists have been lifting up the cannabis industry for years. We go together.”

Prior to entering the cannabis industry, McRoberts was working with musicians and their managers on marketing and communications. Eventually, she was asked to serve as a judge for several High Times Cannabis Cups, and quickly realized that the next step of her career should involve pot. As the person in charge of curating the playlists for ECO’s Telegraph Avenue location (among numerous other duties), McRoberts says her focus is on picking songs that reflect not only the spirit of cannabis, but also the spirit of Oakland and the city’s diverse community.

“You can't have just one type of music playing in the store,” McRoberts explained. “In the old days, it was either the Grateful Dead, reggae, or hip-hop. When people thought about cannabis, they thought about stoners and reggae. The truth is that there are all types of different musicians and people who have been using cannabis for centuries."

McRoberts said it’s her aim to reflect this sentiment through ECO’s music curation. On a typical day at ECO, customers might hear everything from the sweet country stylings of Kacey Musgraves to the Bay Area beats of rapper Andre Nickatina. The rules for what flies regarding music are largely based around two principle concerns.

“We don't want to freak anyone out,” McRoberts says, “and we don't want anyone to pass out.”

For example, McRoberts doesn't want consumers to be overwhelmed by, say, the more aggressive offerings of Metallica, or lulled into slumber with a heavy dose of a dream pop band like Beach House. But beyond the correlation between music and physical sensations, she has also taken note of the emotional comfort that music can provide — or deny — shoppers. 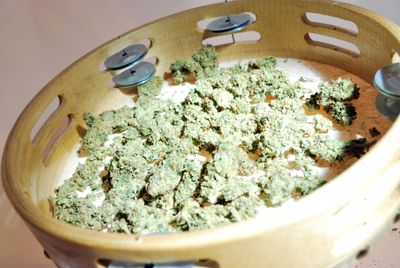 According to Eaze’s 2018 State of Cannabis report, consumers that fall into the baby boomer demographic (age 50 or older) grew by 25 percent in US states with legal cannabis. As someone running a dispensary, you might be inclined to cater to this large new slice of the market by playing a steady stream of Pink Floyd and Neil Young, but where would that leave the rest of your customers?

“I think it's really important to have a diverse selection of music — as diverse as our customers,” McRoberts suggested. “We talk every day about how diverse our consumer base is. You might have someone who just turned 21 and is walking in for a party joint, or it could be a grandmother picking up her topical or tincture. You want the people coming into a dispensary to feel at home. They might not necessarily notice the music if they're digging it, but they'll notice it if it offends them or makes them feel not at home."

As part of his effort to ensure a varied and engaging rotation of songs at Oasis’ downtown Vegas location, Sillitoe allows budtenders to have a say in what’s playing.

“We like to leave a little bit of flexibility for the people that are representing Oasis on the floor with our customers,” he explained by phone. “That way they can feel their own personal vibes and get in their groove and enjoy their time at work. Their customer interactions are better as a result.”

Like McRoberts, Sillitoe also strives to ensure some local acts get a spotlight, as well. Since opening their doors in 2016, Oasis has welcomed live performances from bands like Lawn Mower Death Riders and also hosted drum circles and open mic nights, thanks to a community space located next door to the dispensary. Then there was the time Snoop Dogg and Ray J stopped by to film a music video for the track, “Doctor’s Orders.”

“That song is played from time to time,” Sillitoe said with a laugh.

In some cases, a dispensary’s bond to music is even more overt than whatever happens to be playing from the speakers.

At Hi Fidelity in Berkeley, good tunes are always on everyone’s mind — given the store is located in the former jazz and classical section of the legendary Amoeba Music. With one of the country’s preeminent independent record retailers serving as their neighbor, Hi Fidelity has embraced the challenge of living up to Amoeba’s reputation as a trusted name in music curation.

It certainly doesn’t hurt that Hi Fidelity is owned and operated by Marc Weinstein and David Prinz — two of Amoeba’s founders.

Weinstein describes the soundtrack at Hi Fidelity as “partly a reflection of our Berkeley community [as well as some] sweet, inspiring sounds that will not distract or generate unnecessary controversy.” That means customers may find themselves encountering the avant-garde jazz of Miles Davis or the English rock of Traffic.

“As music geeks first and foremost, we are tuned into our community and what people love,” Weinstein said. “It should always be dependent on your clientele. As much as cannabis is uplifting for the mind and the creative soul, we want people to be reminded of and comfortable with the obvious connection to music. There's a reason why the first — and for decades, the only — place to buy cannabis-related paraphernalia was in record stores!” 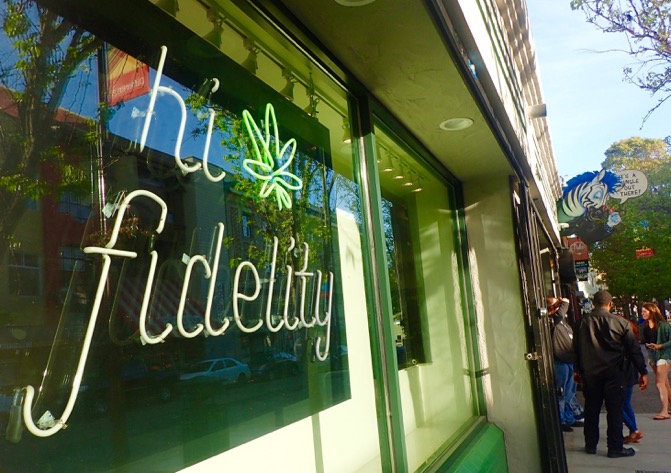 Experience has always been a valuable commodity in the retail game. It’s certainly helped Steve DeAngelo, founder of Oakland’s Harborside dispensary. By his count, he’s been making playlists for his business since 2006.

At that time, Harborside’s customer base was exclusively medical patients, which inspired DeAngelo to play things on par with what one might hear at the doctor’s office (if, of course, doctors offices didn’t play any muzak).

“I put together the original Harborside playlists almost 12 years ago,” DeAngelo recalled in an email. “We were a medical cannabis dispensary, so I selected rhythmic yet soothing and soulful music from almost any genre — as long as it didn’t feature lyrics about break ups or lost loves or anything. That might trigger negative associations.”

In addition to the focus DeAngelo paid to curating the proper vibe, he also sought to incorporate songs that could be considered “greatest hits” in the history of music and cannabis.

“I tried to build in a sense of humor and appreciation of the culture that has grown up around cannabis,” he explained. “Since then, we have added to those lists to keep them fresh and current, but we always make sure they reflect the many different tastes of our diverse clientele.”

For McRoberts and ECO Cannabis, too, the desire to sprinkle in some pot-focused tracks is simply irresistible.

“I’ve purposely picked some stoner, tongue-in-cheek songs that are aligned with our movement and messaging,” she conceded. “Stuff like 'Everybody Must Get Stoned.' You play a classic Bob Dylan tune at a dispensary and I'd like to think there's someone's walking around and having a giggle.”

Still, she agreed that ECO’s primary objective is to provide a sense of security and inclusion to their customers. Eliciting laughs is great, but when it comes to dispensaries, the true power of music lies in its ability to unite communities and connect a cannabis business to its local culture.

Familiarity breeds comfort. Hearing a tune that speaks to your neighborhood is the sonic equivalent of a fresh pie on the windowsill. In the heart of Oakland, hearing the opening strains to Souls of Mischief’s “93 'til Infinity” is more welcoming than any neon sign ever could be. Furthermore, diverse playlists ensure that dispensaries avoid being seen as tone-deaf or completely at odds with their local communities.

“I'd like us to be more than a safe place,” McRoberts said. “It’s this idea that you don't have to be stoned while you're at a dispensary to feel elevated. It's just the experience of the lights and the music and being amongst the plants in this environment. It would make us happy to know that we’re sending our customers out the door with a bag full of weed and a good song in their head.”

BUSINESS
LEGALIZATION
CALIFORNIA
DISPENSARIES
MORE...
Zack Ruskin
FOLLOW
Zack Ruskin is a cannabis and culture journalist living in San Francisco. Follow him on Twitter: @zackruskin.
Share this article with your friends!
AD
By using our site you agree to our use of cookies to deliver a better experience.
Accept
Decline
MORE FROM MERRY JANE