CULTURE
Journalist Matt Taibbi Exposes the Inner Workings of Modern Drug Dealing
AD
The "Rolling Stone" reporter and legendary political firebrand teams up with an anonymous weed dealer to unpack the rules of peddling pot at the twilight of prohibition.
Published on December 20, 2018

The Business Secrets of Drug Dealing: Adventures of the Anonymous Black Male by Matt Taibbi and Anonymous is a collaboration between one of the world’s best-known journalists and an unnamed former law-breaker to create a novel “inspired by truth” that exposes the inner workings of the 21st Century street drug trade in the U.S.

Matt Taibbi, for the unfamiliar, is a provocative, blisteringly-witty, and — most importantly — impactful Rolling Stone reporter who, for the past two decades, has reshaped history with his takedowns of political wrongdoing, economic skullduggery, and corporate-state terrorism. For Drug Dealing, though, Taibbi teamed with a real-life ex-pusher to create a text he describes as:

“The story of Huey Carmichael, a hyper-observant, politically-minded, but humorously pragmatic dealer who spends a lifetime compiling rules for how a person like him successfully a) makes money and b) avoids prison in modern America.”

In addition to the daring subject matter, Drug Dealing is another first for Taibbi, as he’s published the book online, in serial form, via Substack — a platform designed to empower and deliver independent writing projects.

As to why Taibbi chose this format, he cites the incendiary nature of the material (the book’s original title was How to Deal Drugs and Get Away With It) and notes in the intro, “How else would we publish it?”

Taibbi graciously made time to talk to MERRY JANE about how his drug dealing epic came to fruition, what the future holds for the marijuana black market, and why all modern politicians who say they never smoked pot in college are lying. 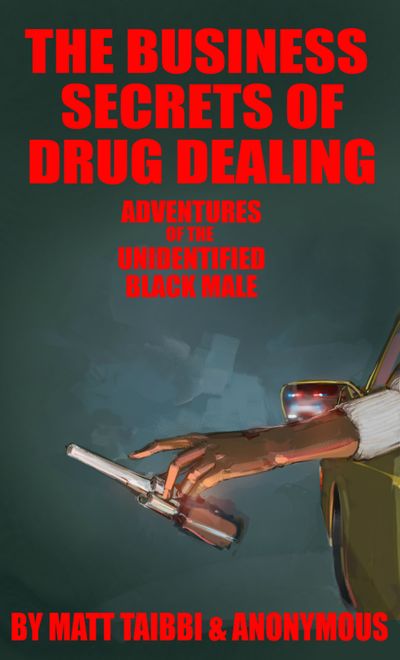 MERRY JANE: How did you come to write The Business Secrets of Drug Dealing?

Matt Taibbi: It’s a really interesting story. A friend of mine who I knew in another capacity, who was a source in a political story, someone I’d known for years — an African-American political consultant — came out to me and say he’d had a secret life. He’d been a high level marijuana dealer for years, and he wanted to write his life story.

So where are we, culturally, when it comes to selling marijuana? A vast number of Americans are safely and legally enjoying the plant, but it remains illegal on a federal level. Where do you see that situation heading?

I think we’re in a difficult place with that, and most of my ideas on this come from talking to my anonymous co-author. The kind of halfway-legal, halfway-illegal situation we have going on right now is totally untenable. People who have been dealing for decades, who have been doing the actual business, especially with marijuana — which I think is a totally harmless escapade and should have been legalized a long time ago — those people all see the writing on the wall.

That would be a disaster of another level, but the situation we have now is really bad because in states where weed is still illegal, where there’s still prohibition, they’re racking up easy arrests just by waiting at the border and busting people who bought legal weed one state over. It is awful. We have to have a national referendum on pot.

Do you think that’s going to happen?

Probably not with this administration! [laughs] But, culturally, with the next generation, I do. Don’t you think so?

Absolutely. The next generation is already there. A guy I know in California recently said, “If you ever told me when I was a kid that I’d be here legally smoking weed at my friend’s legal gay wedding, I would have said you were high!” 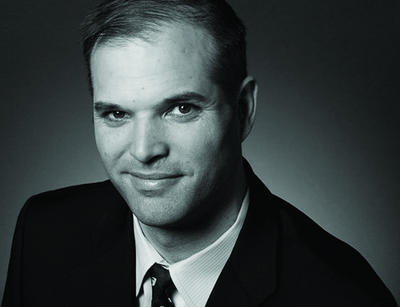 I do think the stigma around weed is going to fall away with the next generation. It just has to. Everybody’s doing it! And it’s good for people!

Right, right! I’m a parent. I have young kids. I look at my five-year-old kid and I think about how I’d much prefer when he gets to be in high school that he’d be stoned and sitting on a couch watching cartoons than drunk and behind the wheel of a car.

That’s right, and I think most police would say the same thing. The only problem is, and I learned this from things I learned working on previous books about the criminal justice system, is that weed is an unbelievably easy way to get a bust.

In the stop-and-frisk era, and even when weed is decriminalized in New York City, they can easily turn it into a crime by having you take it out of your pocket. So police who have quotas — and a lot of them have unofficial quotas like, “We want you to write 20 tickets a month” — they just look around. You can tell who’s smoking weed and you can easily get a bust out of it.

What about when it comes to politicians. Are we at the point where a candidate can still be considered “electable” if they come right out and I say, “I smoke pot”?

Yeah, I think so! I covered Barack Obama when he first came out on the campaign trail, and there were stories about him with, you know, cocaine use and all that. I remember there was a dramatic change just in the way reporters treated that issue, as opposed to the way they had back when George Bush had been president. It briefly became an issue, I think, toward the end of the 2004 campaign. But just in four years, people had chilled out about that issue. Marijuana now is on another level. Everybody knows now that if a candidate says that he or she has never smoked marijuana, they’re lying.

It would seem like there’s something wrong with them!

It’s like — did they go to college? [laughs] In my generation, if you didn’t once smoke weed when you were in college and watch Scooby-Doo and waste a whole day that way, it would seem… odd.

You’ve talked about Wall Street potentially crowding out the legal weed business. Can you give us a credible best case scenario of what else might happen?

I think the problem is going to end up being the lobbying money. What’s happening in states like Colorado and California is that you’re getting a lot of financial interests who want to have a bigger share of the money, and then they’re also buying up farms. So it would be great if we can somehow avoid that kind of consolidation that would crush the prices of the drug for the farmers, and the farmers are already worried about that.

I interviewed a lot of people in California who are trying to vertically integrate their businesses by developing their own distribution chains so they don’t have to sell out to a bigger company in the future. If that could work, I think that would be great. It would mean there’d be diversity and that we wouldn’t all of a sudden have, like, three marijuana companies running America.

So that would sort of be like the craft beer model.

Yeah, exactly. I think that would be a real positive. And possible, because that’s already a thing in marijuana culture. You have festivals and everybody develops their own strains. All that stuff’s cool, and I think that it would be a real shame if suddenly pot was just “Old Milwaukee” and “Miller” — which was never part of what smoking weed was all about. You know a big thing was always, “What’d you get? Where’d you get it? This is Maui Wowie and this is Thai stick.” It would be a shame if that was drummed out of the business, and I don’t think it will be. 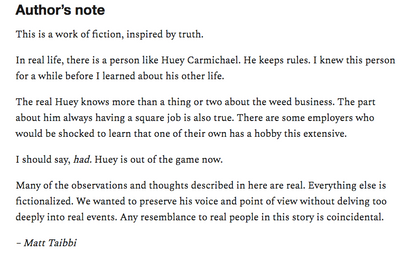 Above, an author's note about "The Business of Drug Dealing"

Let’s circle back now to the book, The Business of Drug Dealing. Tell us a little more about your co-author.

Well, he’s incredibly smart and he’s incredibly interesting. He’s got a background that’s a little bit like the show Snowball. He grew up kind of half in the projects and half in a very rich suburb, and he traveled back and forth between those two worlds. So his niche as a drug dealer was being a liaison between different types of people.

One of the things that ended up happening, when he landed in the legal marijuana world on the West Coast, was a problem that a lot of people aren’t even aware of. The testing equipment is sensitive enough sometimes to detect general strains, but not sensitive enough to tell whether it’s toxic or not. So you might have a ton of harvested marijuana that’s actually fine and not dangerous, but it will test dirty for some kind of bacterium and they’ll flunk it.

If that happens, you’ll have a legal farm with a giant amount of marijuana and they’ll have no way to unload. So there’s a thriving black market where people like my anonymous co-author come in. He talks a lot about how there’s still this business of people driving truckloads of pot across the country. He goes into great detail. He lays out his rules about how to not get busted. He’s never been busted or even faced a drug charge!

He’s a really smart guy and every chapter has four rules to follow. One, for example, is when you do a caravan, you have to have four cars and the weed’s always in the third car. And you always want the most messed-up, criminal-looking dude in the first car. [laughs]. So the book provides his take on this really weird time where weed is both legal and it’s not. It’s actually a very scary time for drug dealers right now.

It’s a great read. Thanks so much for talking to us.

LEGALIZATION
INTERVIEW
BOOK
HISTORY
MORE...
Mike McPadden
FOLLOW
Mike McPadden is the author of "Heavy Metal Movies" and the upcoming "Last American Virgins." He writes about movies, music, and crime in Chicago. Twitter @mcbeardo
Share this article with your friends!
AD
By using our site you agree to our use of cookies to deliver a better experience.
Accept
Decline
MORE FROM MERRY JANE