CULTURE
Jason Statham and “The Meg” Deserve All the Oscars
AD
The recent shark flick is finally available to stream. Now that we’ve re-watched all 112 glorious minutes, we can say with confidence: This is the greatest movie since “On the Waterfront."
Published on November 15, 2018

I’m going to preface this review by saying that The Meg, directed by Jon Turteltaub (who also directed Rush Hour and Cool Runnings), is the best fucking film I’ve seen in years. Though it was released this past summer, the movie is now out on DVD, so the masses can have their minds blown just like I did. When it first came out, I read a Roger Ebert review that said “[The Meg] comes nowhere close to equaling the genius of Steven Spielberg’s Jaws.” Well, I think that review can suck a huge dick, because I give this movie 5 motherfucking stars. The following essay will show why this flick about a giant-ass shark deserves at least six Oscars.

It was a lovely Sunday afternoon in August, and I was depressed. I took two bong rips of Jack the Ripper, my go-to hybrid strain, and checked movie times on my phone. I was definitely way too high to be employed with the difficult task of choosing showtimes, because I somehow ended up taking a 30-minute-long Uber ride to the wrong movie theatre.

When I arrived, I realized the movie wasn’t playing there, so I took another 30-minute Uber ride to the correct theatre across town. (I would have driven myself, but I was too high.) During the ride, I ate a 75mg Sour Kush Kids gummy bear. One and a half hours later, I was cozy AF in my seat with a large Coke to my left, a medium popcorn to my right, and a teenager kicking the back of my seat. I was fucking lit and ready to look at some big sharks. I love sharks so goddamn much. Sometimes I wish a shark would take a little nibble from one of my toes just so that I could tell people I got bit by a shark.

The amazing Jason Statham (who is not only my new favorite actor, but objectively the best actor of all time) plays THE WORLD’S GREATEST DEEP SEA RESCUE DIVER. Statham’s character gets severely traumatized, and retires from deep sea diving, after one of his rescue missions goes shitty, and a bunch of his men die in a submarine. When we first properly meet Jonas Taylor (Statham), he’s wearing a bucket hat and living in Thailand where he spends his time fishing, getting tons of pussy, and drinking, like, 150 beers per day. Again, I can’t imagine a better person to play this role. And Statham isn’t even my type, TBH. I’m not into well-built men, but this motherfucker is sexy, and I was horny from beginning to end.

Statham gets convinced to come out of retirement when an old colleague asks for his help. Turns out, there’s this research facility (owned and funded by Dwight from The Office) that sends out a submarine to penetrate the lowest level of the ocean. It’s hard to explain, but basically these scientists are like “Hey guess what, the ocean doesn’t end where you think it ends, and we’re going to send a submarine down there for the first time in history.” The submarine makes it into this new layer of the Earth, which is kinda cool. Except once the submarine gets there, it wakes up a 70-foot Megalodon shark that was supposed to be extinct a million years ago. The Meg attacks the submarine and fucks it up really bad, leaving the crew stranded down there without oxygen or snacks.

It doesn’t take much to convince Jason Statham to get his groove back though, because he immediately starts ripping his clothes off and gets into a super high-tech submarine that’s going so fast towards the bottom of the ocean that his nose starts bleeding and he passes out. 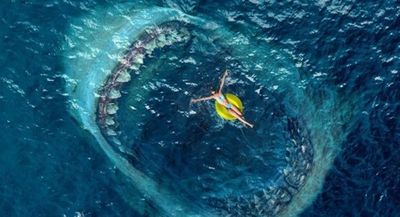 Jason Statham manages to kill the Megalodon shark by like, poisoning its eyeball or something? Then he hangs the shark upside down on the ship and you think everyone’s problems are solved, until out of nowhere, an even BIGGER Megalodon shark jumps out of the water, eating the smaller Megalodon shark. I swear to god, I got so scared when that second shark jumped up that I farted in my seat.

Dwight from The Office, who is incredible in this film BTW, then gets pissed off because he's losing money and wasn’t expecting to have to deal with two huge sharks that keep eating his staff, so he huffs and puffs and gets eaten by the big Meg, which is hilarious.

I was super close to pissing my pants at this point, but I didn’t want to miss one second of this brilliant film. I started to feel like my bladder was about to explode, so I went to the bathroom and ate another weed gummy bear.

When I got back to my seat, Jason Statham was dripping wet, covered with nothing but a towel, and flirting with Li Bingbing, who plays a badass oceanographer, helping with the mission. The couple builds an insane amount of sexual tension throughout the film and I hope they fucked in real life. 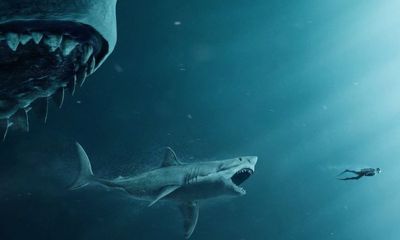 At this point in the canonical film, the Megalodon shark is headed to a beach in China. Not just any beach, but THE most populated beach on Earth. Literally there are thousands of people partying and swimming on this beach. It looks like a goddamn soup.

Jason Statham is not about to let anyone else die on his watch, so he takes matters into his own hands. Literally. He jumps off a boat and swims directly up to this one million-pound Megalodon shark and punches it right in the face and kills it. I’m not exaggerating. This literally happens.

Tamara Yajia is an Argentinian-American comedian, writer, and actress. She currently lives in Los Angeles and writes for ClickHole and Funny Or Die. Follow her on Twitter

ENTERTAINMENT
HUMOR
MOVIES
REVIEW
MORE...
Tamara Yajia
FOLLOW
Tamara Yajia is an Argentinian-American comedian, writer, and actress. She currently lives in Los Angeles and writes for ClickHole and Funny Or Die.
Share this article with your friends!
AD
By using our site you agree to our use of cookies to deliver a better experience.
Accept
Decline
MORE FROM MERRY JANE