CULTURE
Inside Mexico’s First Self-Declared “Cannabis Town"
AD
A group of agriculture workers in Tetecala, Morelos are measuring the future in marijuana plants.
Published on December 17, 2021

Rosa María Quiroz Sotelo’s face glows when she talks about the future of Tetecala, her lifelong hometown located in the Mexican state of Morelos. She is a sugar cane farmer, but it’s cannabis that is making her radiant. Quiroz’s first weed plant, drooping in her garden under the sun of an early dry season, indicates her status as a novice marijuana agriculturalist. Her backyard, however — filled with lemons, oranges, guayabas, mameys, avocados, tamarind, and strikingly colorful flowers — suggests that this grandmother of seven will take to cannabis cultivation with ease. “I have a little bit of everything,” she says, “so as not to lack anything.”

But Quiroz and many campesinos, or agricultural workers, across Mexico have identified an unfulfilled need: Explicit permission from their government to grow cannabis. In the wake of the regional farming industry exodus and the frightening loss of lives caused by the Drug War, Tetecala’s citizens’ request for a different future seems simultaneously idealistic and urgent.

Mexico has long cultivated cannabis — and during the last century of the plant's prohibition, it was mainly to supply US consumers. Violence from the government’s war against criminal organizations that traffic marijuana and other drugs virtually left no region of the country unscathed. Now that Mexico is moving slowly towards marijuana legalization, the rural towns that bore the brunt of the Drug War’s aggressions should profit from the commercial cannabis industry — not just the corporate interests that always benefit from legalization. "We want to cultivate for everything,” Quiroz asserts, envisioning future Tetecala cannabis harvests. “Recreational, medicinal, [and] for food.”

Quiroz and a small group of other Tetecala farmers are done waiting for the government’s permission to make their dream of cultivating cannabis a reality. On October 9, Quiroz and fellow campesina Alicia Trujillo Toledo lowered a marijuana plant into a hole in the garden of Tetecala’s central plaza. They took this symbolic step after proclaiming their community “Mexico’s first cannabis town.”

Weeks before, the group presented a local decriminalization proposal called the “Plan of Tetecala” to Mexico’s federal health agency [COFEPRIS, which controls the recently-created licenses that are ostensibly available to Mexicans for personal cannabis cultivation and consumption] and President Andrés Manuel López Obrador. The Plan asks for the decriminalization of cultivation, sale, and other cannabis-related activities for tetecaltecos. Quiroz and her peers hope that such agriculture could bring financial liquidity to Tetecala via tourism and product sales. On November 23, the group went to Mexico City to present the Plan to the Supreme Court, National Commission of Human Rights, and other entities of the federal government, alongside activists from the city’s long-standing cannabis protest camp in front of the Senate.

Statistics provided by Mexico’s Secretary of the Economy state that Tetecala is home to 7,617 residents. 55 percent of the town lives in what the Mexican government qualifies as poverty — a designation based on income and access to a variety of social resources — according to the most recent figures published in 2015. Farmers in the region blame the price drop of traditional crops like sugar cane, corn, and beans, on top of an exodus of agricultural processing facilities, for this high rate of economic hardship. "Tetecala was a very beautiful place,” says Quiroz. “But since they shut down the [sugar cane processing] factories, the town has gone downhill.” 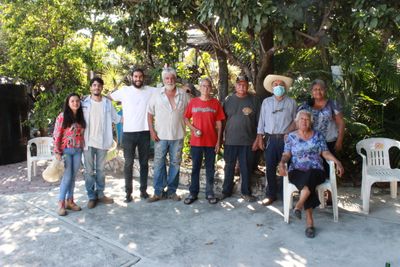 The name and concept for the “Plan of Tetecala” is designed to echo Mexican Revolution general Emiliano Zapata’s 1911 manifesto, the “Plan of Ayala” (which was published in Ayala, another town in Morelos located roughly 50 miles east from Tetecala.) The text asserts that campesinos have an inalienable right to farmable land. The “Plan of Tetecala” re-applies that principle, contending that it’s the campesino’s right to grow cannabis, a crop that’s currently inaccessible as a source of legal income to small farmers due to the illegality of the plant.

The petition was authored by Andrés Saavedra, a lawyer from Cuernavaca who works with a legal non-profit called Artistas Legales [Legal Artists]. It was pitched to the tetecaltecos by another man named Alejandro Vello Arellano, a surgical doctor who currently works in Mexico City’s National Central Hospital, but who grew up locally and operated a Tetecala medical clinic for two years. Vello, who met Saavedra through the doctor’s cousin, tells MERRY JANE that he funds the drive to organize community members around the “Plan of Tetecala” from his own pocket.

So far, Saavedra says the team has found about 13 Tetecala farmers hoping to start cannabis growing operations. 38 farmers from surrounding towns have expressed interest in the proposal, which is one of the main intentions of the project. In a country wracked by Drug War violence and tough times for small farmers, Saavedra and Vello hope the Plan can be used by rural communities across Mexico to advocate for cannabis rights and bring economic activity to their areas.

As a way to make this vision a reality, the Tetecala group is hosting an educational workshop series for interested campesinos along with monthly informative sessions. Agronomist Karina Belmont leads the sessions, which tackle different kinds of products that can be made from the plant — so far, mainly salves, tinctures, and the use of cannabis leaves as an addition to salads and other food products.

After the ceremonial planting in Tetecala’s zócalo, or center square, Belmont consulted farmers on sowing their own cannabis plants. She advocates that they start with six plants each and use a mix of seeds to produce a diversity of varietals, from hemp to psychoactive indicas and sativas. She also teaches farmers to use organic materials typically found in Tetecala gardens, like fallen leaves that can be used as mulch. Time will tell how well these new gardens grow — Morelos’ average temperatures run hotter than 85 degrees Fahrenheit, which is the recommended maximum heat for growing outdoor cannabis plants (though endemic strains could prove more resilient in hot weather). 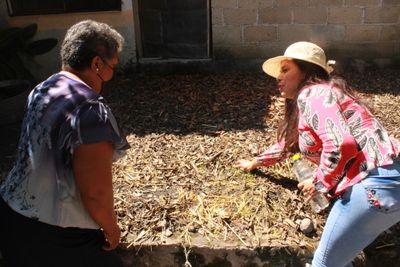 The weather isn’t the only challenge for bringing cannabis to Tetecala however. The stigma around cannabis use — particularly against those perceived as practicing narco behavior — makes recruiting prospective farmers tricky. “Some say we're crazy,” says Quiroz when asked about the naysayers. “Others say, ‘que bueno.' There are people who haven't understood the point of the project. I think that they think that this is about getting high with marijuana.”

Oaxaca, Michoacán, Guerrero, Jalisco, and many other Mexican states are home to countless farming families — many of whom are Indigenous — who have generations of experience growing weed. While a large portion of this agriculture is used to supply criminal organizations, cannabis is not a main driver of profit for cartels anymore due to legalization in the US, evidence suggests. Still, the continued presence of such groups makes launching a media campaign or growing marijuana openly à la Tetecala simply unsafe for residents in rural areas.

The rights of small-scale cannabis farmers regularly appear in political debates about legalization in Mexico. In fact, conflicting perspectives between the country’s two legislative houses on social equity measures that benefit Indigenous and campesino communities were partly to blame for the stagnation of the legalization process in the spring of 2020. (Mexico’s Senate approved a legalization bill that guaranteed business license quotas for Indigenous entrepreneurs. Those protections were weakened in the version subsequently approved by the lower legislative house, and it failed to get the Senate’s final approval.)

Perhaps that’s why, despite challenges to the “Plan of Tetecala,” its proponents are so convinced of the project’s importance for Mexico. “We were THE FIRST VALIANT PEOPLE to [publicly] state our desire to be a cannabis town,” Vello writes in a WhatsApp message to MERRY JANE.

Back in Quiroz’s lush backyard, she says she's hopeful politicians will see the urgency of Tetecala’s demand for a local cannabis industry. “Many of the young people have left the town, looking for work in other places,” Quiroz says, still standing in front of her struggling cannabis plant. The leafy growth is wilting, but its green promise remains implicit in her words. “If there's no work, there’s no money, and no nutrition for the town. That's what's driving us to look for better options for the community."

CULTURE
MEXICO
FARMERS
CANNABIS EQUITY
MORE...
Caitlin Donohue
FOLLOW
Caitlin Donohue is a Bay Area-raised, Mexico City-based cannabis writer and author of She Represents: 44 Women Who Are Changing Politics and the World. Her weekly show Crónica on Radio Nopal explores Mexican marijuana culture and politics in the prohibition era. Follow Caitlin on IG @byrdwatch.
Share this article with your friends!
AD
By using our site you agree to our use of cookies to deliver a better experience.
Accept
Decline
MORE FROM MERRY JANE