CULTURE
Heady Entertainment: "Bohemian Rhapsody" Burns Bright, Tenacious D Stays Dank
AD
With November upon us, it’s time to give thanks for weed, weekends, and fun ways to combine the two. Thankfully, this list of pop culture nuggets will help you do just that!
Published on November 2, 2018

With November upon us, it’s time to give thanks for weed, weekends, and fun ways to combine the two. That includes, of course, loading up on munchies at the multiplex for the Freddie Mercury biopic Bohemian Rhapsody or the garishly CGI-splashed fantasy The Nutcracker and the Four Realms.

Pot-ready pleasures light up smaller screens, too, in the form of Hulu’s horror anthology Into the Dark, the woke Showtime NBA series Shut Up and Dribble, and the animated bug-outs Our Cartoon President and another season of Mike Judge’s Tales from the Tour Bus. Music releases this week fall deep into psychedelic overdrive via new albums by Mother Feather, Sex Blender, and the righteous, always reefer-fueled return of Tenacious D. So let’s get straight — but not “straight” — to this week’s fresh-rolled recommendations.

As a beaming, booming, ferociously charismatic rock-‘n’-roll frontman, Freddie Mercury of Queen remains unsurpassed. Off-stage, Freddie also lived it like he played it, blissfully hurling himself into sex, drugs, and haywire hedonism like few humans could even imagine. Ultimately, Freddie’s recklessness cost him his life, but what a ride, what a legend, and what a legacy he has left us.

Rami Malek of Mr. Robot rises to the challenge of slipping into Freddie’s skin in Bohemian Rhapsody, a biopic that also explores the larger saga of Queen—the one band that united glam rockers, punks, metalheads, disco divas, and even the pioneers of hip-hop (those drums on “We Will Rock You” got sampled everywhere...) in a loving manner that only marijuana itself has ever been able to accomplish.

Sure, The Nutcracker and the Four Realms is a kiddie flick and, yeah, it’s a little early for Christmas stuff, but consider it through the filter of a cannabis: This is a tripped-out, mega-budget CGI visual effects explosion from Disney that explodes with flying fairies, dancing flowers, and an army of warrior mice led by a three-headed king against a wooden super-soldier. Toke up and ease back in Imax 3D — ’tis always the season for that!

Episode two of Into the Dark, Hulu’s monthly horror anthology series, serves up the scary with a Thanksgiving episode appropriately titled “Flesh and Blood.” Home and hearth succumb to creeping terror as teenager Kimberly (Diana Silvers) attempts to cope with the murder of her mom by a serial killer, and realizes that her dad (Dermot Mulroney) should maybe not be trusted with a carving knife when it comes to turkey time. Just as getting lit hugely helps when it comes to actual family encounters at Thanksgiving, ingesting a paranoia-producing strain for Flesh and Blood will make for a deliciously diabolical high.

For anyone convinced and/or hoping that our present powers that be in Washington might just all be animated buffoons, we’re sorry to report that, no, those people are frighteningly real. That said, Our Cartoon President, Showtime’s riotous series produced by Stephen Colbert, does make that fact easier to take — while also inspiring viewers to do something about it.

With mid-term voting coming right up, the show’s Election Special 2018 pits Donald Trump (Jeff Bergman) against the “Blue Wave” of his nightmares with savagely satirical results. Light up and laugh and then, seriously, get out and vote on Tuesday for anti-prohibition, pro-pot-legalization candidates!

With politics and professional sports intermingling more than ever these days (consider Colin Kaepernick vs. the NFL), Showtime’s documentary series Shut Up and Dribble focuses on the role of NBA players and real issues regarding culture, social causes, and those who govern us.

Executive produced by LeBron James, the first episode delves into Golden State Warriors star Stephen Curry turning down a trip to the White House to be congratulated by President Trump, and his fellow champions taking a stand along with him. It’s all potent food for thought, so pass a joint, take it in, and let’s talk about what we can all do next.

“Tales From the Tour Bus”: Season Two
Watch It: Cinemax

With Tales From the Tour Bus, stoner cartoon comedy giant Mike Judge (Beavis & Butt-Head, King of the Hill) brings to life true stories of superstar musicians’ most maniacal misadventures from the road.

The first season focused on classic country, but for this next trip, Tales takes us on board for the flaming, freaky, flat-out insane recollections from funk masters of the highest-of-high order, including James Brown, Rick James, George Clinton, Bootsy Collins, Betty Davis, and Morris Day. Drugs, for sure, figure into the proceedings, so be sure to play along at home.

One of the most tripped-out art flick midnight movies of recent decades, director Leos Carax’s fever dream extravaganza Holy Motors is complex and alluring, beautiful and ugly, shocking and soothing — all at once. As such, it’s intensely recommended that you approach it only after getting seriously smoked up.

Denis Lavant stars as an all-too-human shapeshifter who travels around Paris by limousine, creating entirely new lives and personas for himself with every stop. To say more would be to risk spoiling the movie’s myriad surprises, so just pack your bong and prepare to experience a film that can only be categorized as a horror-drama-mystery-comedy-action-romance-musical-science fiction blowout.

“The Horror of Party Beach” (1964)
Director: Del Tenney
Get It: Severin Films

The Horror of Party Beach bills itself as the “The First Horror-Monster Musical” and it’s a crazily campy throwback to a time when teenagers were actually too scared to smoke marijuana — so when you watch now, you’ll just have to do it for them!

While making the summer scene, bikini babes and surfboard studs boogy on the sand to local band the Del-Aires until they’re overrun by a pack of rubber-suited mutants who sort of look like the poorest possible cousins of the Creature From the Black Lagoon.

Combining the goofball “beach party” movies of their day with a radioactive monster invasion and the post-Beatles craze for garage rock, Horror of Party Beach is a genre-melding mess that naturally made it perfect fodder for skewering on Mystery Science Theater 3000. Now you can smoke up and crack wise to it on your own.

With The Wizard of Gore, director Herschell Gordon Lewis, the granddaddy of all splatter horror, tops all his own previous plasma-splashed outrages, which is no mean feat, considering that they include the so-gross-they’re-hilarious-to-get-loaded-to Blood Feast (1963) and Color Me Blood Red (1965).

Wizard follows the fiendish doings of Montag the Magnificent (Ray Sagar), a sideshow illusionist who slices, dices, dismembers, and decapitates volunteers from his audience who, afterward, seem fine — but they go home and literally fall to pieces! With vibrant violence, stupidly-awesome special effects, uproarious bad acting, and a sense of lunacy only H.G. Lewis can provide, the Wizard of Gore is a scream. Inhale deep and howl. 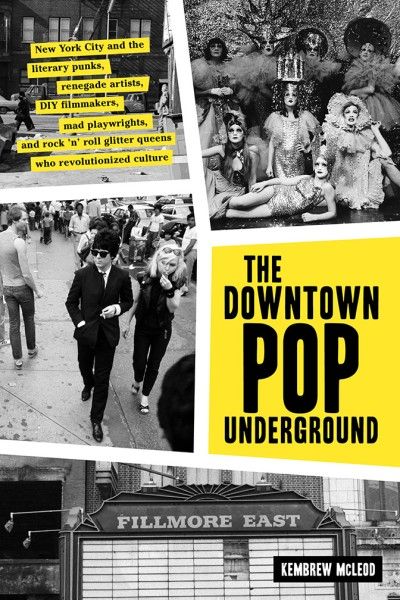 When it comes to creative revolutions launched in conjunction with mind-expanding drug use, New York of the 1960s and ’70s has few rivals. Obviously, that’s why so many books get written about the city’s various artistic movements, but fear not, The Downtown Pop Underground isn’t just another declaration of “Manhattan cool” to toss on that pile.

Instead, author Kembrew McLeod has illuminated numerous unsung heroes of the era, utilizing exclusive interviews and never-before-seen photographs to put you, the reader, smack in the vintage Gotham action. Once you’re there, of course, it only makes sense to get high so you can feel right at home.

“Constellation Baby”
By Mother Feather
Get It: Metal Blade

New York City glitter-magic gutter-glam marauders Mother Feather ignite pure marijuana rock revelry on Constellation Baby, their sophomore long-player. Leading off with a single called “Totally Awesome” takes some nerve, but, rest assured as you roll a fat one, the face-painted four-piece co-fronted by Ann Courtney and Elizabeth Carena amply make good on the inherent premise — and weed-worthiness — of that title.

“Hormonizer”
By Sex Blender
Get It: Bandcamp

Wafting forth from the Ukraine, the psychedelic Sex Blender does just what the band’s name implies on Hormonizer. This hot-pumping four-piece machine chops, smashes, whirls together, and otherwise mega-mixes intoxicating ingredients on the order of dirty blues, acid rock, pounding drone beats, and free-form exploration into an illuminating blast of brain-popping onslaught.

JB (Jack Black) and KG (Kyle Gass), history’s all-time mightiest marijuana-powered satanic metal acoustic guitar duo, roar back with Post-Apocalypto, which is both an animated YouTube series and the D’s first LP since 2012’s The Rise of the Fenix.

Both the show and the album chronicle the spliff-amped adventures of JB and KG after they survive a nuclear holocaust (by ducking into a refrigerator) and emerge to battle a new anti-cannabis evil out to ruin what’s left of the world.

Aiding our heroes (often by getting them high) are sexy cavewomen, a time-traveling robot, a two-headed dog named Hope, and, on the drums, Dave Grohl. The cartoon is a mind-ripper, drawn entirely by Jack Black with markers on notepads, and the album is yet another instant stoner comedy classic. Long live the D!

420
TELEVISION
ENTERTAINMENT
MUSIC
MORE...
Mike McPadden
FOLLOW
Mike McPadden is the author of "Heavy Metal Movies" and the upcoming "Last American Virgins." He writes about movies, music, and crime in Chicago. Twitter @mcbeardo
Share this article with your friends!
AD
By using our site you agree to our use of cookies to deliver a better experience.
Accept
Decline
MORE FROM MERRY JANE