In theaters, Keanu Reeves brings sci-fi scares to the multiplex with Replicas, while the new IFC midnight shocker Pledge pushes frat house horrors to freakish extremes. Small screen options to smoke to include Lindsay Lohan’s Beach Club on MTV, the animated Godzilla: The Planet Eater on Netflix, and Valley of the Boom, a deep dive into the early days of the Internet, on NatGeo.

Among the just-dropped collector’s edition cult flicks are Sly Stone’s slam-bang Cobra and the blaxploitation blowout Willie Dynamite. Marijuana-worthy music spans the globe this week with the doom pop of Angelic Milk from Russia, the serrated guitar attack of Forests from Singapore, and Chrome Sparks from the Nation of Brooklyn.

While college fraternities are properly celebrated worldwide for raucous parties where kegs get tapped, joints get passed, and inhibitions go up in smoke, the Greek system has been known to have a dark side, too. We’re all familiar with true-life instances where hazing practices go awry and turn absolutely horrific. That’s where the new scare-flick Pledge comes in — hard and heavy.

After failing to be accepted by any frat, dork first-year college students Ethan (Phillip Andre Botello), David (Zack Weiner), and Justin (Zachery Byrd) get asked to join a mysterious campus group that lures them to a secluded mansion for 48 hours straight of initiation rituals.

If the three dorks survive, they’ll be permanent members of the school’s elite. That’s a big “if,” though as director Daniel Robins piles on gruesome torture, shocking twists, and killer suspense. Pack a pipe with a paranoia-inducing strain and make your way to see Pledge this weekend. It will whack your brain like a fraternity paddle.

Whether he’s half of Bill and Ted or battling the Matrix or blowing away baddies as John Wick, the presence of Keanu Reeves on screen always proves promising for potentially-stoned moviegoers.

Replicas ups the appeal by casting Keanu as a brilliant neuroscientist who delves into Dr.-Frankenstein-type insanity after his family gets wiped out in a car wreck. The results, as you might expect, don’t pan out to his liking — but you will like watching what happens after you get high.

Godzilla: The Planet Eater is the final film in a trilogy that reinvents the towering terror of Tokyo by way of traditional Japanese anime and up-to-the-minute CGI innovations. So, yes, you get three archetypal forms of stoner entertainment in one explosive package here.

After Godzilla: Planet of the Monsters (2018) and Godzilla: City on the Edge of Battle (2019), Godzilla: The Planet Eater concludes the doomsday saga by pitting the King of the Monsters against Ghidorah, a three-headed dragon that threatens the very existence of Earth itself. Possible spoiler alert (and yet another reason to get lit and watch): Mothra figures into the mayhem, too — spectacularly.

The first big buzz show of 2019, Lindsay Lohan’s Beach Club, is exactly the trainwreck everybody was hoping for, as the former Hollywood A-lister now deems herself “boss bitch” over a squadron of twenty-something hardbodies who’ll do anything to glam it up (and ham it up) on camera.

LiLo, in fact, only periodically floats in and out of the proceedings, which go down amidst a gorgeous setting in Mykonos, so the assembled buff-and-bronzed service workers are Beach Club’s real stars. You’ll love to hate them and hate to love them as they supply news reasons to spark up another doob and keep tuning in to the awesome dumbness of it all.

Netflix’s latest British import sitcom Sex Education is yet another sterling plunge into cringe humor at its most uncomfortably hilarious. Asa Butterfield stars as teenage virgin Otis, who teams with local high-school “bad girl” Maeve (Emma MacKey) to create an underground class regarding the biology and emotions of human intercourse on their uptight campus. Gillian Anderson shines as Otis’s sex therapist mom who adds endlessly to his embarrassment — which is so horribly funny you’ll want to toke hard just to attempt to deal with it.

Decades before smartphones and endless apps and modern miracles such as ordering dope online, a bunch of hyper-talented tech geeks and too-eager business types came together to create the commercial Internet as we know it — and created a massive financial bubble that burst ugly in the process.

Nat Geo’s Valley of the Boom chronicles that real-life late-’90s madness by combining a narrative comedy-drama starring Bradley Whitford and Steve Zahn with documentary facts into some highly-intriguing entertainment.

In 1985, Sylvester Stallone conquered the universe with the two biggest blockbusters of his career, Rocky IV and Rambo: First Blood Part II. He then teamed with the magnificent shlockmeisters at Cannon Films to unleash Cobra, a completely whacked-out combination of rogue-cop action flick and blood-cult horror fest.

That decision prompted many to wonder what Sly might have been smoking, but as a bong-passing viewing favorite, Cobra gained an instant cult following that has only expanded through the decades (and all the ensuing upgrades in THC-delivery system technology).

As Lt. Marion “Cobra” Cobretti, Stallone is put in charge of protecting a supermodel witness named Ingrid (Brigitte Nielsen) from a Manson Family-esque cabal, led by the Night Slasher (Brian Thompson), that deems itself the New Order.

The bad guys kill with speeding cars and battle-axes; Cobra goes up against them with both cutting-edge ’80s weapons (many viewers first experienced the magic of laser-mount submachine guns) and classic Old West firepower (our hero’s go-to sidearm is a pearl-handled Colt. 45). It’s all a loud, gory mess and heaps of fun to cheer at while high. Cobra still strikes just right.

Willie Dynamite, the most unsung masterpiece of the classic blaxploitation era, finally gets its due thanks to this collector’s edition Blu-ray from Arrow Films.

Roscoe Orman ignites the screen as Willie Dynamite, the most ambitious mack daddy in New York City, who won’t settle until he’s the most feared and revered player in town. J.J. Johnson’s wah-wah score and Martha Reeve’s title song provide the perfect soundtrack to Willie’s wicked adventures, while vintage views of the 1970s Big Apple at its most beautifully rotten provide a nonstop mind-fuck setting.

To properly prepare to view Willie Dynamite, pack your ankle-length fur-coat pockets with skunk weed, strap on your highest-heeled zebra-print platform boots, and bust out your most regal pimp stick. Then ease back for an avalanche of outrageous action, righteously funky grooves, and all-out maximum badassness. 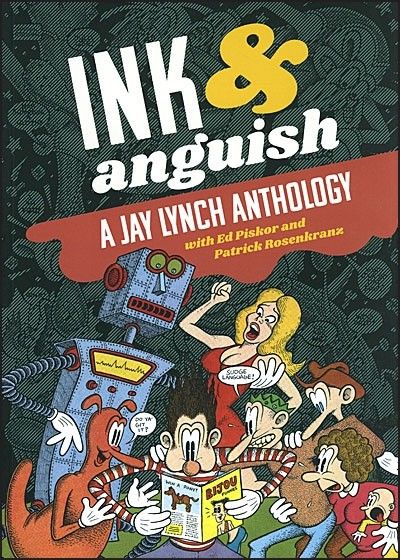 “Ink & Anguish: A Jay Lynch Anthology”
by Jay Lynch with Ed Piskor
Get It: Quimby’s Bookstore

“Be on Fire”
By Chrome Sparks
Get It: Bandcamp

Under the moniker Chrome Sparks, Brooklyn-basked synth-dance conjurer Jeremy Malvin blasts us dynamically into a vast array of soundscapes over the course his new EP’s five tracks. Be on Fire swirls and bobs ecstatically, engulfing at various points club vibes, deep groove heat, blurts of funk, and hazy eruptions of sweet lit bliss.

Angelic Milk whips forth a storm of hard, jittery goth-psych gloom-pop, straight out of St. Petersburg, Russia. Frontwoman Sarah Persephona coos, wails, and leads the deep dive into danger on Divine Biker Lover, the band’s debut long-player, following a succession of cult-building EPs. The record feels like the result of endless nights of excess and it rips like a sonic invitation to keep that abandon going forever. Pair it with whatever intoxicants you can — and then just keep adding to the pile.

“Spending Eternity in a Japanese Convenience Store”
By Forests
Get It: Bandcamp

With an album title that instantly conjures one hilariously dope possibility for stoner heaven, the spiky Singapore trio Forests serve up unpredictably skull-spinning delights throughout Spending Eternity in a Japanese Convenience Store. The group’s second LP zips from party rock to car-crash dissonance to bubbly pop-punk and beyond in the course of every song. Crank it up after smoking up, and be sure to have actual convenience store munchies on hand for maximum effect.

420
MUSIC
ENTERTAINMENT
MOVIES
MORE...
Mike McPadden
FOLLOW
Mike McPadden is the author of "Heavy Metal Movies" and the upcoming "Last American Virgins." He writes about movies, music, and crime in Chicago. Twitter @mcbeardo
Share this article with your friends!
AD
By using our site you agree to our use of cookies to deliver a better experience.
Accept
Decline
MORE FROM MERRY JANE