CULTURE
Heady Entertainment: Matt Groening Gas, David Lynch Diesel, and Animal Collective Kush
AD
The best pot-friendly pop culture of the week, featuring the reissue of David Lynch's "Wild at Heart," a new animated series from the mastermind behind "The Simpsons," and rippin' new records from Oh Sees and AnCo.
Published on August 17, 2018

The broad appeal of marijuana as a movie-going additive is evidenced by Alpha, Mile 22, and Puppet Master: The Littlest Reich — three completely different new big-screen releases best watched on weed (but, then again, so is everything). On the new Netflix animated series Disenchanted, Simpsons and Futurama creator Matt Groening sends up epic fantasy in cahoots with stoner comedy ballers Abbi Jacobson and Eric Andre.

Sound-wise, it’s a trip this week with mind-expanding new records from the heavy-psych likes of Animal Collective and Oh Sees.  So let’s get straight — but not “straight” to this week’s fresh-rolled recommendations.

As one half of the mighty Hughes Brothers, director Albert Hughes has taken us back in time from 1990s South Central L.A. (Menace II Society) to 1970s New York City (Dead Presidents) to 19th century London (From Hell). Now, with Alpha, Hughes dives all the way back to the Ice Age for an epic adventure about a how a young cave-dude (Kodi Smith-McPhee) bonding with a wolf sparked the evolution of the profound friendship between humanity and canines. Get high and see Alpha for the stunning prehistoric visuals. Then, if you tear up a little (and be prepared to do just that), blame your strain making you emotional.

With Puppet Master (1989), B-movie kingpin Charles Band created one of the most formidable — and most frequently smoked-to — horror franchises in the realm of direct-to-video freak-out flicks. Since then, Puppet Master’s tripped-out maniacal marionettes come to life have starred in 12 official sequels, a cross-over with the franchise Demonic Toys, and a series of comic books.

Now Puppet Master: The Littlest Reich is rebooting the stoner fright fav on the big screen, courtesy of cult screenwriter S. Craig Zahler (Bone Tomahawk, Brawl in Cellblock 99). Thomas Lennon stars as Edgar, a horror memorabilia peddler who unleashes hell at a fan convention when his evil puppets leap to life and slaughter everyone in sight. It’s all purposefully over-the-top with insane gore and edgy humor, without veering into buzz-killing parody.

Will Puppet Master: The Littlest Reich be the next midnight movie sensation to watch while stoned? Well, get stoned and find out!

Watch It: Amazon, iTunes, On Demand

The acclaimed documentary King Cohen chronicles the life of cult filmmaker Larry Cohen, the madman behind a multitude of movies that lit audiences have loved for decades. Among Cohen’s cannabis classics: the vintage blaxploitation blowout Black Caesar (1973); the killer baby romp It’s Alive (1976); the flying-monster-eats-New-York adventure Q: The Winged Serpent (1982); and the oozy sci-fi send-up of consumerism, The Stuff (1985).

King Cohen entertainingly profiles Larry as a one-of-a-kind talent and packs in amazing clips from his career, along with testimonials from those who have loved working with him. Pack a pipe, take a hit, and hail King Cohen!

First-time filmmaker Bing Liu’s documentary Minding the Gap incorporates 12 years of homemade video footage into a heartfelt saga about three skateboarding homies on the verge of adulthood in Rockford, Illinois. As you recognize aspects of your own in the movie’s subjects, you may be so moved that you’ll attempt to pass a J through the screen to share with them.

The title may be a dubious claim, but The Last Sharknado does amusingly attempt to outdo the previous five odes to ridiculousness in SyFy’s signature stoner-friendly franchise. Fin (Ian Ziering) travels back through time to attempt to prevent the first sharknado and, in doing so, sets off a whirlwind of entirely new so-stupid-they’re-dope shenanigans.

The Gore Gore Girls is an especially outrageous exercise in extremes, courtesy of horror’s “Wizard of Gore” himself, splatter-maven Herschell Gordon Lewis. Incorporating a bit of self-conscious comedy, GGG centers on a slasher run riot at a topless dance club. It’s bonkers, it’s blood-soaked, it’s bursting with “gags” in every sense of the term, and it’s the hilarious, hair-raising centerpiece of your next bong-passing trash-flick party that’s just waiting to happen.

Wild at Heart is wild, indeed, as star-crossed lovers Sailor (Nicolas Cage) and Lula (Laura Dern) hit the open highway where they fall prey to delirious ecstasy and diabolical downturns alike. Visionary weirdo David Lynch’s deep, violent, Wizard of Oz-inflected masterwork is a romance on the road to hell and (maybe) redemption. Now that Wild at Heart has been upgraded to Blu-ray, you can spark up and notice even more wonders it contains in the miracle of truly high-definition. 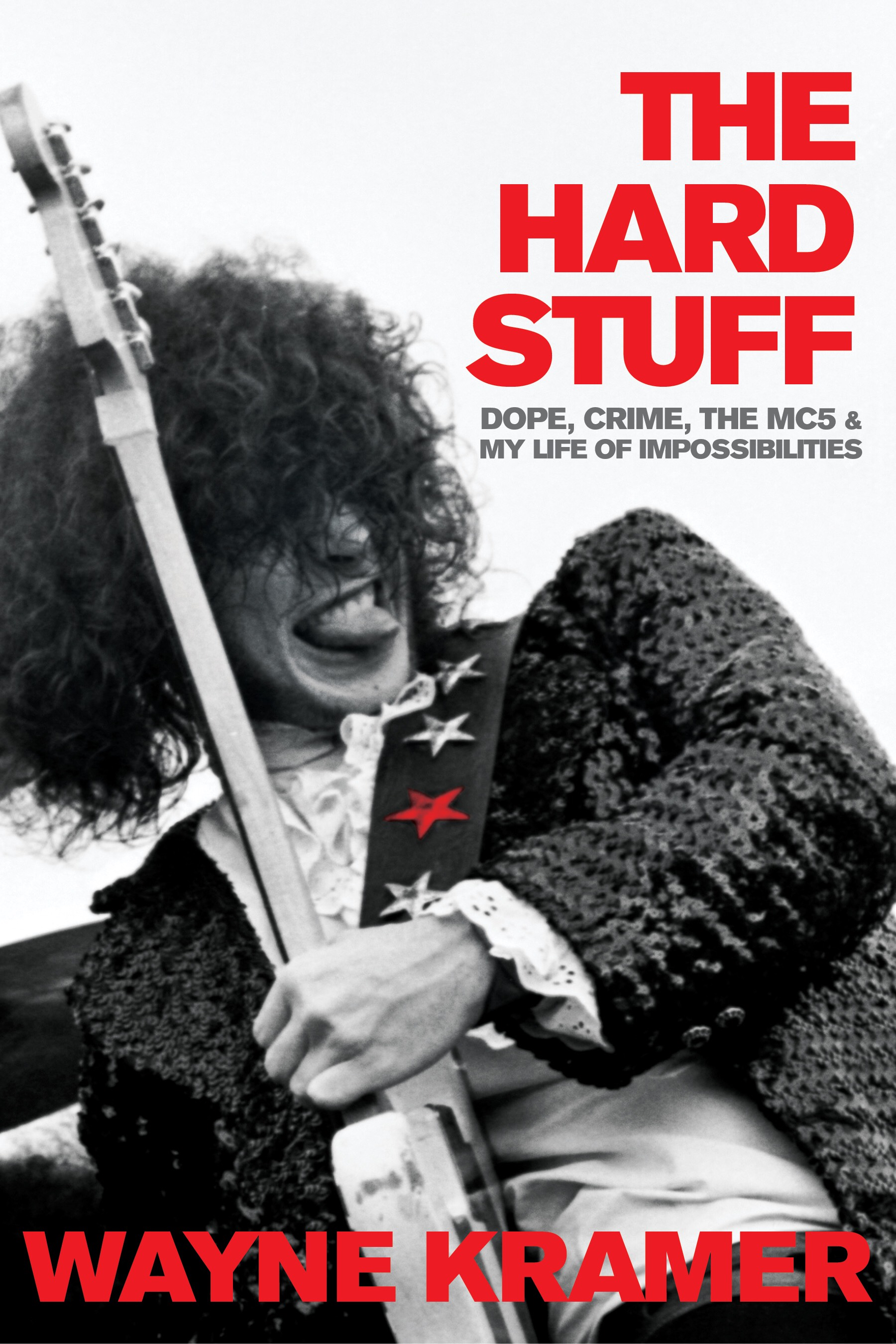 “The Hard Stuff: Dope, Crime, the MC5, and My Life of Impossibilities”

Get It: Quimby’s Bookstore

With the opening notes of their 1968 anti-establishment anthem “Kick Out the Jams” legendary Detroit rockers the MC5 sparked the fuse that later exploded into heavy metal and punk rock. Much of that fire came directly from MC5 guitarist Wayne Kramer, and the heat proved so incendiary that the FBI targeted him as a political insurgent. That, coupled with Kramer’s own addiction issues, derailed both the band and the man, but he lived to tell his saga of survival and triumph in The Hard Stuff. Kramer’s new memoir is a drug-drenched adventure like no other — 320 pages of raw revolution and intoxicating inspiration.

Get It: Castle Face Records

With Smote Reverser, garage-psych groove-pilots Oh Sees launch their 21st full-length album in 21 years — and this new joint is a barbarous onslaught that matches the package’s sci-fi/pulp-metal cover art. From the record’s first notes, Oh Sees overseer John Dwyer obliterates expectations immediately. And then from there, the album just keeps rocketing off in impossible-to-anticipate directions. Hallucinogenic accompaniment among listeners is eagerly encouraged.

To celebrate The International Year of the Reef, boundless sonic explorers Animal Collective plunge deep with Tangerine Reef, a fittingly all-submersive “audio-visual album” inspired by (and showcasing) the majesty of the sea’s most mysterious life forms — which, likely not coincidentally, also happen to be some of the most naturally-psychedelic beings in the universe.

Get It: Season of Mist

The sludge-core stoner fury of Black Tusk on T.C.B.T. will coat your cerebellum like Quaalude syrup, then slink down your spine and overtake your nervous system, burying your being under mega-tonnage of narco-metal bliss. Power up T.C.B.T.,  get lit, then let Black Tusk just slow-burn you down.

420
TELEVISION
MUSIC
MOVIES
MORE...
Mike McPadden
FOLLOW
Mike McPadden is the author of "Heavy Metal Movies" and the upcoming "Last American Virgins." He writes about movies, music, and crime in Chicago. Twitter @mcbeardo
Share this article with your friends!
AD
By using our site you agree to our use of cookies to deliver a better experience.
Accept
Decline
MORE FROM MERRY JANE