CULTURE
Beyond the Green Crayon: A Vibrant Look Inside “The Stoner Babes Coloring Book”
AD
"We are all babes," says author Katie Guinn. There is no non-babe, so the book is reclaiming that word, too."
Published on November 19, 2018

All images courtesy of Katie Guinn

While marijuana-themed coloring books seem to be popping up with the same speed that pot prohibition laws have started falling, a select few have risen above the seeds and stems to represent the primo strains of the genre.

Stoner Babes is a loving creation of lines, shapes, visions, and visionaries splayed out in stunning black-and-white images just waiting for you to light them up with your own weed-inspired shades, hues, tones, and tints.

Each two-page spread in Stoner Babes profiles a real-life hemp-loving female hero on one side, and a ready-to-color portrait of the same subject by author Katie Guinn on the other.

The Portland-based artist took care to make sure that the babes in the book were as diverse as the experiences of marijuana. Her profiles highlight feminists, members of the LGBTQ+ community, women of color, women of varied sizes, and women with different abilities. What unites them all is a love of what cannabis brings to their lives, and the inspiring ways in which they — and Katie — express that appreciation.

Katie Guinn took some time to talk to MERRY JANE about The Stoner Babes Coloring Book. Pack a pipe, bust out your Crayons or charcoals or paint or pencils, and come on along. 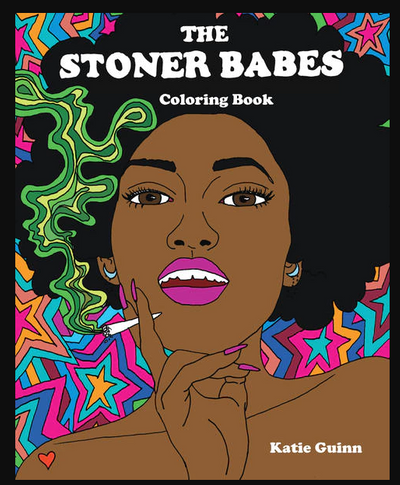 MERRY JANE: Where did the idea for The Stoner Babes Coloring Book come from? How did you make it happen?

Katie Guinn: I'd had the concept of "Stoner Babes" as a group, like a club for a while and had shirts made that said it. I know so many women who are successful, driven, creative, and intelligent, and who also make shit happen in the world — and they all partake.

I wanted us to unite in some way, show ourselves, and change ideas about what being a stoner is. The truth is, we all struggle sometimes, too. But giving in to what our culture constantly tries to teach us — that we're not good enough — is bullshit. I know so many people can relate to that, too many.

Those women and gender fluid humans inspire me, and I needed to represent as many of them as possible, because that is real life. When I had five illustrations, I researched "Feminist adult coloring books" and found Microcosm publishing. The company’s headquarters happen to be in North Portland where I'm from and still live!

I submitted to them and they loved the idea. I then researched them more because I was like, “Wait! What? They love it?” I wasn't familiar with that instant acceptance of my art, and that will stay with me forever, keep me going. They are the real deal and it's been a dream working with them.

What role does marijuana play in your life?

I took a very long hiatus from marijuana after smoking way too much in a not-healthy way in high school. About seven years ago, I became intrigued about reuniting with the plant. I'm not a heavy smoker and I have to be in the right headspace to appreciate the experience. It has changed my life as far as pain goes. I have polycystic ovarian syndrome and endometriosis, so my pain levels are pretty significant at times.

I've also rekindled my love with pot for artistic purposes and going for walks. I certainly don't need to be high while creating art, but at times it really amplifies the concepts that may be hiding in my body. 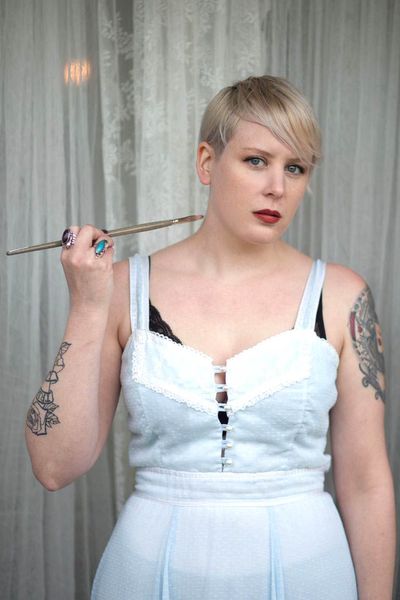 What is your relationship to the word “stoner”?

The word always sounded so “loser-ish.” I was called a stoner in high school a couple of times and it pissed me off. Not only because I was more than that, but it's the intent behind a word that gives it its power.

I wanted to reclaim that word and make it something to celebrate. We are stoners for all kinds of reasons. This plant literally saves lives. It's the most multi-faceted medicinal flower I know of and now that it's legal in some states, we are able to better understand and utilize every facet of it that exists. That's so spectacular to me.

The book is described as “for babes, by babes.” Why was that important?

We are all babes. There is no non-babe, so we're reclaiming that word also. 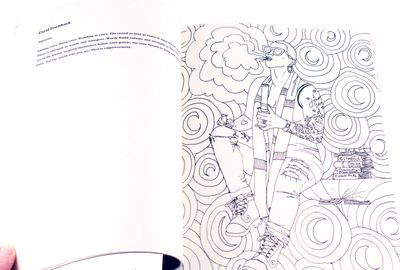 Do you notice connections among art, wellness, and marijuana?

For me, I need art to stay alive. Art has saved me many times throughout my life. Even when I can't be creative, if I am able to just make — draw, paint or write, sculpt, whatever! If I can use my hands to get shit out of my body, I am better off.

Marijuana is motivating for me, and those days when I can't seem to do the dishes, sweep the floors, or get dressed, getting high and cranking up a record will help me get through with energy.

Lately, art and cannabis has helped me move through my grief of losing my father in July. My dad was a major champion of my creative work, and I'm so grateful he got to see this book. He knew how much it means to me. He was my favorite stoner babe and I miss him dearly.

How did you select the subjects who are portrayed in the book?

The book features many of the people I was originally inspired by, so I was ecstatic when they said yes to my inquiries. I did a lot of “cyber-stalking” on Instagram, looking for a diverse source of inspirational humans, and I did open calls on Facebook. I asked friends to ask friends and I was turned down a few times, and even just ignored. The most important detail for me was to represent diversity and show what I was saying, that we are all babes, and that everybody is to be celebrated.

Aside from the amazing artwork, the book is extremely well written and enlightening. Tell us about your background as a writer.

That's so kind of you, thank you! I can't take credit for the writing in this project, since every statement is from the individual who is rendered. I asked them “What does empowerment represent to you?" And those are their answers. I also included their star signs. Aren't they all such beautiful writers?

You're right, though, I am a writer, and I spent many years telling myself I wasn't. I started writing again about six years ago and spent a little over a year as a freelance writer for the Portland Mercury. I primarily sought out people in the local design/art/fashion industry who were under the radar, and did feature interviews with them, and I also covered events in the city.

Since then, I've been working on personal shit. I took the very first corporeal workshop in 2015 with the phenomenal Lidia Yuknavitch, who’s in the book. Since then, I have been learning from Lidia and her sister Brigid Mosher, as well as Domi Shoemaker, who’s also in the book, and other incredible guest instructors. I write poetry, and personal essays, a couple of which have been published in The Manifest-Station and Nailed magazine. I also love content writing! 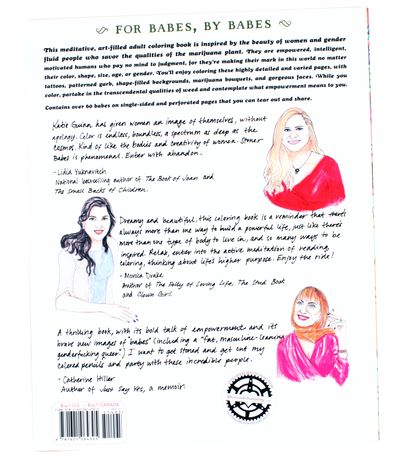 How have the perceptions of marijuana changed in the world since you starting smoking?

I've grown up around marijuana as an acceptable thing to do — if you’re an adult — since I was a little babe. Of course, not everyone I knew felt that way, but I saw some family members smoke it and I knew my Dad did, even though he wouldn't do it in front of us until we were older. Once I realized what that "special tobacco" amazing smell was, I was like, “Mmm, I want some!”

I know some people who used to refer to weed as "dope" and perceived it as this evil drug, but they’ve changed their minds since it became legal. As the benefits are becoming not only more available but acceptable, it's difficult to ignore how superior a medicine it is compared to man-made pain relievers, stress reducers, anti-anxiety meds, and so on.

What are some other adult-oriented coloring books you recommend?

I also love Flower Fairies by Cicely Mary Barker and Birds of the Northwest that my mother-in-law gifted me years ago. But my two favorites of all are the Illuminating The Stars Coloring Book by another Portland artist, Alicia Justus, and The Court of The Diverse Mermaids by Micah Blacklight. These books contain the most beautiful coloring book illustrations I've ever laid eyes upon. 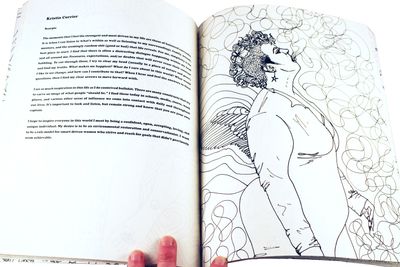 What is your ultimate hope for The Stoner Babes Coloring Book?

I hope the people who guffaw at the book's title will open it up to see what's inside, read some of the statements of empowerment, connect to the beautiful humans within its pages, and have their minds changed about so many ways they currently viewed the world. That's not too much to ask, is it?

I dream that women, specifically WOC, LBGQT+, and disabled humans will find this book and connect with it, and feel less alone if they're put down for loving the transcendental qualities of the plant. But even if they don't partake in any way, this book is more than just marijuana, it's about community, lifting others up, and being empowered by acknowledging our individual stories, but also recognizing pieces of ourselves in others' experiences as we move through life in this crazy-beautiful place we get to call home.

I love the idea that I get to collaborate with everyone who colors the pages. We are making art together and that's so rad to me. I absolutely love seeing pages colored by friends and strangers! It makes me feel like cuddling. I want people to feel like we could all meet up and party together. I hope it sells mad copies so I can travel to new places, see more of Earth's beautiful landscape and culture, and color with people I've never met before.

Also, I'd really love to be sent to Paris and have a coloring event at The Louvre. And I hope I can have a coloring party with Whoopi Goldberg, Chelsea Handler, Sarah Silverman, Snoop Dogg, Martha Stewart, Willie Nelson, Britney Howard, and Annie Clark. Hey, it could happen, and doesn't that sound like a badass "get high and make art" party!?

I have a few projects in the works, actually. I'm working on a collection of paintings and a couple of zines. I'm just going to keep making art and standing up against hatred. As an artist, I believe it's my duty to experiment with the goal to invent new ways to tell stories and help save lives.

420
WOMEN
INTERVIEW
ENTERTAINMENT
MORE...
Mike McPadden
FOLLOW
Mike McPadden is the author of "Heavy Metal Movies" and the upcoming "Last American Virgins." He writes about movies, music, and crime in Chicago. Twitter @mcbeardo
Share this article with your friends!
AD
By using our site you agree to our use of cookies to deliver a better experience.
Accept
Decline
MORE FROM MERRY JANE