CULTURE
August Magic in the Ganja Garden: Ten-Foot Pot Plants and Pungent Aromas
AD
Our cultivation columnists detail the bright green glory of their cannabis garden in late summer: "Soon, the fruits of our labor will be realized and enjoyed!"
Published on August 21, 2019

We've been out on the road a lot lately, visiting dispensaries around the state to meet with budtenders and talk with customers who enjoy our flower. It always feels great. Given the scarce number of cannabis retail outlets, in order to compete with the big corporate growers, we feel that actually visiting the stores ourselves helps them understand who we are and why Swami Select is special.

In addition, as we fight for the survival of the small legacy growers in The Emerald Triangle, much of our life has been focused on appealing to the Mendocino County Board of Supervisors, writing to state regulators, and the engaging task of helping the local cannabis community get organized and speak with a powerful voice. As a result, many of our recent articles have been a reality sandwich, of sorts, where we’ve documented the trials and tribulations of coming into compliance.

Nevertheless, whatever is happening out there, it is always uplifting to drive up into the Mendocino Highlands on our way home and take in the glorious sunset view from the top of the hill. Then, we snake down the winding one lane road through the woods, cross the bridge over the creek and see our golden meadow appear out of the forest. The brilliant green cannabis plants shimmer in the distance behind the scattering of oaks. As we drive through our funky gate, we can see the ranch house angling around under the Douglas fir trees. Opening the car door, our puppy Tipu invariably jumps in for the last 50 feet of the journey, welcoming us home. From there, all it takes is a short walk to the Sri Yantra cannabis garden, and all of the world's worries seem to fade away. 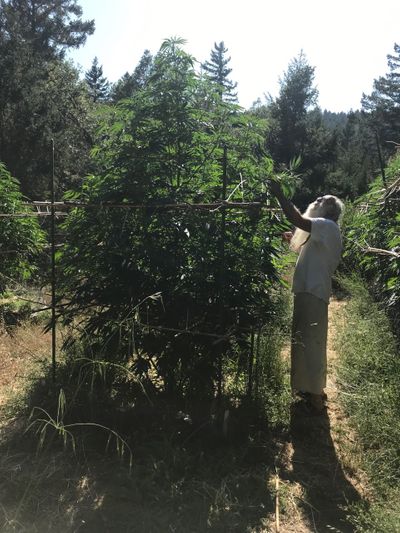 Right now, in late August, all the gardens are shining with bright green glory. Many of the Girls (as we call our plants) are over ten feet tall and they’re getting close to six feet in diameter. Adam and Colin, our master growers who have taken over most of the garden work, have been putting the second layer on the bamboo trellises, and we're figuring out how to add a third layer as the Girls keep growing taller with each full moon.

All around the beds, mullein is flowering and will soon seed, while the white clover works as a living green mulch at the base of the plants. Organic wheat straw covers the sides of the little mini beds, or “hugelettes” as we call them. In the past, we have had problems with gophers tunneling under the plants and eating the tap root, which kills the plant. Last year, they got five healthy Girls. This year, we took the extra precaution of making baskets of half-inch hardware cloth to go around the tap root and keep the gophers out. So far it’s been working.

Around the third week of July, the first plant started to show the clustering effect that signals it has started to shift from the vegetative stage to the flowering stage. For most cultivars, it will be between 60 and 80 days from that first sign of flowering until the plant is fully mature and ready for harvest. Interestingly, the first plant to show flower is not necessarily the first one to finish, as a late starter can be a quick finisher.

The savvy farmer chooses cultivars with different flowering times, so that they can optimize the drying space. According to our rough calculations, it takes about the same amount of space to dry the plants as it does to grow them. Thus, it is important to have cultivars that mature about two weeks apart (early, middle, and late). This way, by the time the second batch is ready to cut, the first batch has had at least 10 days, preferably two weeks, to dry so that it can be taken down and put into boxes to continue curing. Then the next harvest is hung in its place. 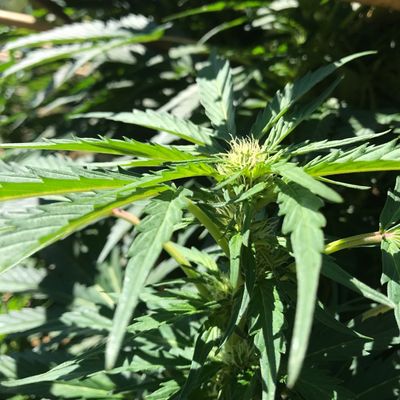 As we watch the Girls grow and begin to flower, vigilance never lets up. We are on the look-out for pathogens, as well as mites, aphids, and any of the other pests that love to feast on cannabis’s tender leaves and delicate flowers. We have already let loose a “loveliness” (look it up!) of ladybugs as a preventative. We are also spraying a diluted preparation of organic soybean oil, organic peppermint oil, citric acid, and isopropyl alcohol as a preventative for pests, mold, and mildew.

In spite of this, the other day Adam noticed some little white flecks on a Magic Melon plant, which turned out to be aphids. Incredibly, the ants actually farm the aphids. They bring the aphids onto the plant, which feed on the sap of the leaves and stems. Then, the ants massage the lower abdomen of the aphids which causes them to secrete a sticky milky substance, called honey dew, which the ants love. A true symbiotic relationship, where both benefit, except us. So we’re going to get a whole bunch of ant traps and a lot more ladybugs, although we learned that the ants actually protect their beloved aphids from the ladybugs. It’s a battle zone in the foliage. 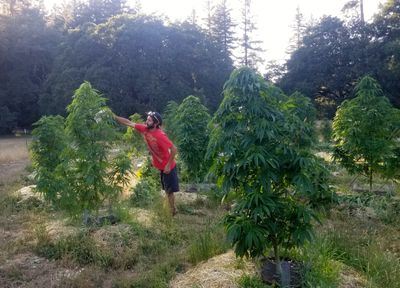 Just the other day, Adam also noticed that one plant seemed to be damaged right where the trunk turns into the root and goes in the ground. It looked like root rot and there was a bunch of white gooey icky stuff all around the trunk, which Adam dug out with a spoon. He then doused the base of the trunk in hydrogen peroxide. Two branches had wilted, so he cut them off to conserve the plant’s strength for healing. We are repeating the hydrogen peroxide treatment daily, and the plant seems to be doing better, but we’re keeping a close eye on her.

Of course, we immediately went around and checked the trunk of each plant. All the other plants were good, but then, along with Colin, we had a long discussion questioning if we had been giving the Girls too much water. Adam got out a long probe to test the moisture content of the soil in the bed and it measured 10 on the scale, meaning there was a fair amount of saturation. This is due to the relatively high percentage of clay in the surrounding soil, which tends to hold the water. This leads to the soil looking dry on the top, but deep down it is still moist. So in spite of the hot sunny days of August, we cut back on the watering. 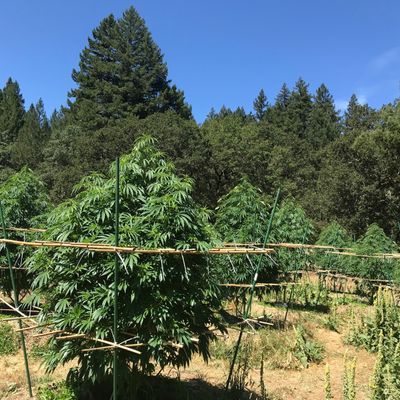 There is no one-size-fits-all in cannabis farming. Each cultivar will have its own water needs, and sometimes even various phenotypes of a cultivar have different needs. Of course, all kinds of soil have unique saturation, retention, and drainage characteristics, requiring their own watering schedules. In the end, it’s all about the farmer tuning into the plants, listening to their needs. This truth is embodied in an old saying: “The best fertilizer is the farmer’s shadow on the plants.”

Now that the vegetative phase of plant growth is ending and the plants are all starting their flowering phase, their unique characteristics are beginning to show. One plant, a Mendo Pakalolo, has deep burgundy stalks and stems, which is different from the others of the same seed batch, whose stalks are a bright green. It is a different phenotype of the main cultivar — kind of like brothers and sisters that have brown eyes and blue eyes, or blonde and brunette hair color, but they have the same parents. Such is the nature of growing from seeds vs. clones where they are all identical twins. Late summer is the most exciting and also the most anxious time of the whole season. So many things could still go wrong. By now, the plants are almost fully grown and their presence has become known to all and every pest, predator, or pathogen in the neighborhood. As the days get shorter and fall begins (bringing misty foggy mornings and possible rainfall with it), mold and mildew can become a problem.

The plants won’t increase in size very much from now on, but the buds will get bigger, longer, and denser up until it’s time to harvest. To stimulate the flowering, we will change the compost tea we feed the soil, in order to make more phosphorous available to the plants. Now, the glorious aromas of the developing terpenes begin to flavor the garden. The excitement and the enticement grows as the creamy white yellow hairs of the flowers display their ripening progress, and the magnificent sweet cannabis fragrances waft over the whole county. We can’t wait until harvest begins, probably at the very end of September. At last, the fruits of our labor will be realized and enjoyed!

AGRICULTURE
CULTIVATON
PLANTS
THE EMERALD TRIANGLE
MORE...
Nikki and Swami
FOLLOW
Known as "The Cannabis Couple," Nikki Lastreto and Swami Chaitanya have been proudly promoting cannabis use for decades. As cannabis cultivators in Mendocino County, the heart of the legendary "Emerald Triangle" region, Nikki and Swami are behind the brand Swami Select, producing taste and pure flowers grown in full sun with organic methods, plus that extra little Swami touch.
Share this article with your friends!
AD
By using our site you agree to our use of cookies to deliver a better experience.
Accept
Decline
MORE FROM MERRY JANE