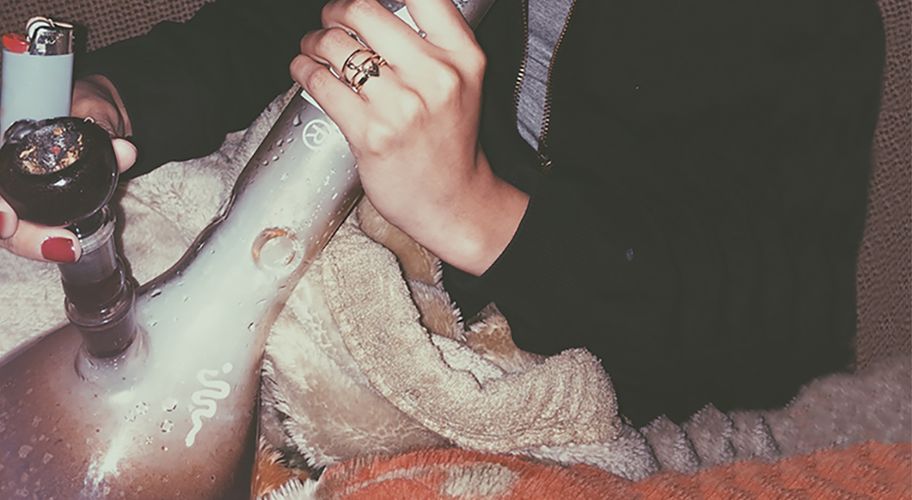 An Ode to Comet, My First Bong

The first bong is a rite of passage for many stoners - just like the eventual, inevitable sound of glass breaking.

The first bong is a rite of passage for many stoners - just like the eventual, inevitable sound of glass breaking.

I’ll never forget his long, slim, 18-inch glass body. No percolators, nothing particularly fancy. He was powerful, transparent, and ready to get the job done — just like me.

My first bong, Comet, was a rite of passage I granted myself the summer before my junior year of college. I’d returned to San Diego for school a month or two early to move into my first “real” apartment, with my own master suite that would, of course, be 420-friendly. After finally moving out on my own, I was adamant that I deserved a great glass piece to have in my room for safekeeping, and, of course, to show off to friends.

Brand name recognition runs strong in the tight-knit cannabis community, so naturally I had always pined after a German-made RooR water pipe of my very own. I stubbornly refused every pricey alternative the eager smoke shop attendant threw at me and opted for a simple straight tube with glass-on-glass stem and bowl gear setup for my new friend. All under $200, I proudly recall.

I even underwent the stoner tradition of assigning the perfect nickname to my piece. The way this tube created a perfect smoke tunnel, with no barriers, made for an out-of-this-world snap. Thus going with the theme of blasting off into space, “Comet” simply felt appropriate and cute. Haters literally could not stop me if they tried. This bong was popular amongst all my friends, and everyone knew that it would always be sparkling clean and well taken care of.

Considering the life he lived, and the tender three-year relationship we had maintained together, Comet’s death was quick, harsh, and sadly uneventful. It was all due to my being lazy and keeping him on the floor, rather than safe on higher ground, while I was on the computer. Though in retrospect, breaking your own stuff and shouldering the guilt is far better than being at odds with a friend over a piece of glass, so I’m glad it was me.

Precisely what I was up to on the computer that night, I’m not sure I’ll ever truly remember. Probably building another website I’d never launch, or perhaps playing the ever morbid God-Mayor of SimCity, as I’m known to do. Either way, I wasn’t nearly attentive enough to my most prized possession, and for that we both paid dearly.

I got up to get a drink, and gave Comet a slight kick on my way out of the chair. Mere milliseconds later, he was horizontal on the hardwood floor. The place where the body and downstem connect was broken off, a puddle of water seeping like bong blood out into the room. The noise that I emitted was halfway between a scream and a squeak, like someone who has lost their voice.

Alas, hindsight is 20/20, especially when it comes to a pipe that has sentimental value. Our minds race trying to decipher what we could have done differently, or whose fault it was, how this travesty could have been prevented, if at all.

The moral of the story is that no matter what you do, no matter how paranoid you are about breaking your beloved piece, it could still easily happen to you. Such is life, and though the memories of all our prized pipes and bongs live on forever in our hearts, it’s good to be reminded every once in awhile that they are just stuff.

Beautiful pieces of glass come and go; in the end, isn’t that all we are? Just appreciate the times you spent with yours.