CULTURE
Age Is Just a Number: 1960s Rockers Ace of Cups Are Jamming Harder Than Ever
AD
We caught up with guitarist Denise Kaufman of all-female rock outfit Ace of Cups to talk LSD in the '60s, today's political climate, and what it means to be rocking out with her band at age 70.
Published on July 22, 2019

Acid. Hippies. Sex. Rock and roll. Haight Street. The ‘60s laid the foundation of the counterculture. It shaped art, music, politics, and created space for people to unify over issues preventing societal peace, love, consciousness, and community. Many of those issues — women’s rights, civil rights, free speech, and government corruption — are just as relevant today. And Denise Kaufman, guitarist of ‘60s band Ace of Cups, is spreading many of the same messages in 2019 as she was when her band first formed during the heyday of psychedelia.

If you’re not familiar, Ace of Cups opened for Jimi Hendrix at Goldengate Park in June of 1967, just seven days after he sacrificed his Stratocaster to the rock gods at the Monterey Pop Festival. They opened for The Band in 1968 at the Winterland Ballroom. They hung out with the Grateful Dead, Quicksilver Messenger Service, Grace Slick and her band Jefferson Airplane. Kaufman rode with Ken Kesey and the Merry Pranksters on the Furthur, and reveled in the hallucinogenic glory of the Acid Test-era.

If you look at Ace of Cups’s body of work, you’ll find a series of live recordings from the ‘60s, but nothing polished and recorded for release — until now. The all-female four-piece finally put out their first official record, titled Ace of Cups, last fall through High Moon Records, and are currently on the road charming crowds with a host of groovy female-power bangers. 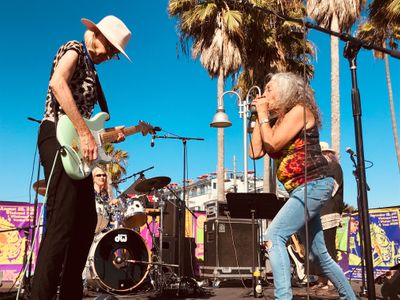 The band played at the Venice Beach Music Festival last Saturday to a crowd of 200 colorful hippies. Ace of Cups were vibrant and cast a psychedelic hue of peace and love over those in attendance. Former Pranksters showed up in support of their long-time friends. Barefoot, dreadlocked lovers sparked up as they intertwined over a mandala tapestry.

Billows of smoke rose over the crowd, as Mary Ellen (the band’s singer and other guitarist) and Kaufman told stories about what it was like on the Haight and being in a rock band just as the hippie movement erupted. At the time, people had "never seen an all-women rock band," but Ace of Cups made their mark by breaking stereotypes, performing punk-esque break-up music, and singing songs about smoking weed.

In no way did it seem like the women on stage were in their 70s. They jammed with the power of wild women in their youth. It was evident that we were witnessing legends of counterculture making audible magic on stage.

We caught up with Denise Kaufman prior to the show and talked to her about what it’s like performing with Ace of Cups now, taking LSD with the Merry Pranksters, and why consumerism and today’s political climate are a sick joke.

MERRY JANE: Tell us about what it’s like being in a ‘60s band that’s experiencing a second wind almost 55 years later?

Denise Kaufman: Well, I don't have anything to compare it to. But, it's pretty great. There is a spirit that we always had and always felt. But most other people didn't know about it — and they didn’t know about us. So it feels as though we're carrying through with that. Actually, it feels like it's carrying us, really. Now is finally the right time. And we’re writing new music, too.

Tell us about the new record!

There's something special about Ace of Cups coming together in this new wave of feminism. How have these themes infiltrated your work?

The stereotype that we were breaking when we first started was women playing and being in a band at all. We had never seen an all-women rock band. We weren't following in the footsteps of anything we knew or had seen. There were girl groups that sang, but they were backed by guys. We had seen the doo-wop groups we grew up listening to, but they weren't a rock band. So, when we started, we really didn't have anywhere to look. We just unfolded, and did what we did.

But the stereotype that I also think we're breaking up now isn’t just being in an all-women band — it’s the age thing. We want to be a support, inspiration, and encouragement to people who aren’t young. They can still live their best lives!

Women of our age are kind of societally relegated to a back corner. We want to be supportive and encourage people not to stop. We want older people to figure out a way to share their passions, their art, or whatever they're doing! A lot of other cultures celebrate their elders. Our culture is kind of, well... you know, we keep making the same mistakes. [Laughs] Does the current state of political affairs feel like déjà vu at all to you?

Yep, that’s exactly it. Are we really sliding backward this quickly? It's shocking to me. I'm appalled. I just look for places to make a difference. And I think we do that as a band.

More than anything, though, humanity needs to get together and figure out how we’re going to have our world be a good one for our children and grandchildren. That’s truly what matters. If things stay as they currently are, we’re not going to have much more time on this planet. The Earth isn’t well right now. We have to find ways to live more lightly on the earth. We can do that by calling the bluff on consumerism! There's no future in it. The things that get touted as having value in our culture don't matter. What matters is something much deeper; it’s community and protecting our planet. Let’s make our decisions with a much longer view of humanity and this Earth. We need to refocus here.

When did you meet Ken Kesey and the Merry Pranksters?

I ended up meeting Ken Kesey and the Pranksters at a conference in Monterey at the end of the fall semester. I went with the band I was hanging out with at the time called The Answer. We were playing together, and the father of the guitarist in the band was the head of the Theological School in Berkeley. It was a massive Unitarian conference in which Kesey was the keynote speaker. So, that's where I met him and the Pranksters. I spent the night on the beach talking to Kesey, and less than a week later, he came back to Berkeley and said, "You’re coming with me! I've come to get you. You're going to live with us on the bus."

So, I quit school and got on the bus. I did that for about a year-and-a-half — until Kesey and the Pranksters went to Mexico. That’s when I went back to San Francisco. But during that time traveling around is when we did the acid tests and got close with the [Grateful] Dead — talk about connection! It was a profound experience. Traveling and living as this group of beings trying to create space for people to have a deep-heart and mind-opening experiences, and create a safe space where people could, as we used to say, "freak freely," was unlike anything. Do you mind going into your experience with psychedelics?

I basically started with psychedelics in 1965 when I was at Berkeley. I was a freshman, and the fall semester was during the free-speech movement — that’s when I got arrested at Sproul Hall. Then, as the spring semester happened, some people that I knew at Berkeley were more spiritually oriented. And they turned me onto LSD. And that pretty much altered my life forever. I'd always had a spiritual connection, but LSD opened it up in a deep, deep way. At that point, I started taking it pretty regularly.

How did those experiences impact you spiritually?

I had sort of always been into yoga and meditation even before that. I studied with a teacher in San Francisco, and my mom practiced yoga. But at a certain point, after taking a lot of acid, I really felt as though I needed to find a way to access that depth of being without any substance. I needed to find that. I spent some time at Esalen Institute. I tried fasting, and worked on maintaining that electric interconnectivity.

Once you experience the collective consciousness (or whatever you want to call that), it was clear to me that even if it took a while to get there, once you knew it was available, you didn't have to keep taking acid to get there. It was — and is — available without a drug. So then the question became, “How do I cultivate more awareness of that in my life?” So that really lead me more deeply into yoga and meditation.

Also, music has always been a part of that for me because it's such an amazing expression of… I mean, it’s really beyond words. But singing lyrics and playing music is an expression of that tapped-in consciousness. When we share music, we feel that, you know? It's like those vibrations are flowing through all of us. The substances just open us up to a connection that’s already there. But music does the same thing.

Visit Ace of Cup's website to see where they're playing next. And keep up with them on Instagram, too.

MUSIC
INTERVIEW
HISTORY
PSYCHEDELICS
MORE...
Mary Carreon
FOLLOW
Mary Carreon is an award-winning journalist from Southern California and the Associate Editor at MERRY JANE. She’s drawn to stories about cannabis and the environment, social equity, veterans, the history of weed in California, and the rise of psychedelics and plant medicine in the 21st century. You can find her bylines in KCRW, Billboard, DoubleBlind Magazine, Forbes, CA Leaf Magazine, Kitchen Toke Magazine, OC Weekly, (the OG) LA Weekly, High Times Magazine, and more. Mary loves green juice, coffee, and red wine equally — but not at the same time. When she’s not reporting, you can find her doing yoga to Ravi Shankar, or migrating towards the nearest venue playing the best music. Follow Mary on social media @maryyyprankster or visit her at marycarreon.com
Share this article with your friends!
AD
By using our site you agree to our use of cookies to deliver a better experience.
Accept
Decline
MORE FROM MERRY JANE