CULTURE
10 Tracks That Highlight UK Electronic Music's Relationship with Weed
AD
A deep dive into UK breakbeat-infused club hits that all pay tribute to the sweet leaf. Take a big inhale, and turn on your subwoofers.
Published on February 13, 2019

When Caribbean musicians passed a sonic joint to the UK, the British coughed up their own distinct take on electronic music. English music historian Simon Reynolds dubbed these Anglophile club styles as part of the "hardcore continuum," a canon whose hallmarks include different takes on, and tempos of, sampled breakbeats and massive sub-bass frequencies.

To get more granular, the birth of the hardcore continuum marked the moment when British electronic music producers departed from the house and techno blueprints laid out in America and started to draw influence from their own home-grown sound system culture, which developed following a wave of immigration from the West Indies in the 1940s.

Throughout the ‘50s, ‘60s and ‘70s, Caribbean transplants developed a subculture of shebeen squat parties and sound clashes between famous sound systems that competed to blast reggae, dub, ska, and calypso records the loudest. But the final seed for England's particular take on machine music wasn't planted until in the ‘80s, when loads of cassettes made their way over from Jamaica. 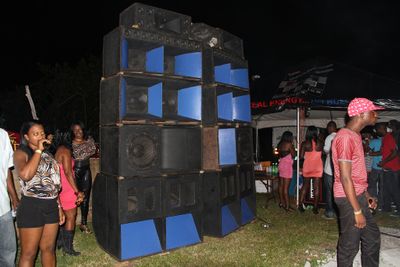 Above, a Jamaican sound system used for sound clashes — photo via

According to radio pirate MC Navigator, as quoted in Reynolds' electronic music history tomb Energy Flash, the name of the high-speed breakbeat-driven subgenre "jungle" was a bastardization of "junglist," a word first heard on one such sound tape. Jungle — along with its siblings in the hardcore continuum like 2-step, speed garage, bleep, and drum & bass — was infused with rasta vibes. MCs toasted ragga-style or espoused soundboy-isms over diced rhythms and dub's trademark FX or steppin' basslines.

Although they drew liberally and directly from Caribbean culture, these English subgenres constituted a distinctly English take on dance music, and became the UK's voice in the international electronic music exchange. When jungle took over in the early-to-mid ‘90s rave scene, it marked a shift in Britain not only in musical styles but also in drug consumption habits, with partygoers beginning to favor weed over ecstasy. Jungle's half-speed basslines — which rolled under cut-up Amen breaks at about 160 BPM — encouraged clubbers to bob at a swaggering tempo that was much more amenable to a punter who's spliffed up, not munted.

Just as the celebrated reggae producer Lee "Scratch" Perry allegedly blew smoke into his microphones in order to infuse or bless his songs with weed, so too was ganja woven into the sonic and cultural fabric of the hardcore continuum. Thus, the herb can provide a stable thread through which to trace the development and history of hardcore continuum styles that have shaped influential, chart-topping electronic music movements like dubstep. While many jungle and hardcore tracks reference spliffs or weed, we wanted to highlight specific tracks that are direct tributes to Caribbean culture and the bush. The following ten selects are by no means the definitive THC tunes in UK electronic music, but they provide a healthy blueprint for navigating the history of English breakbeat club music.

This early work from Byron Lewis and Lee Renacre presaged the ragga jungle craze that would dominate British clubs in 1994. The synth stab falls somewhere between the famous "Mentasm" rave synth sound and a reggae guitar chord, and the rasta chant is pretty unintelligible except for the most important word: "marijuana." Their use of the "Amen" break — a classic drum break that's often used on hardcore continuum tracks — is still a bit herky-jerky compared to the smooth flow of later jungle and drum & bass tunes. After Il Exodus, Renacre went on to define other hardcore continuum subgenres. His work as 100 Hz influenced the sound of late '90s and early 2000s tech-house from Croydon, the South London suburb that also spawned dubstep.

Early junglist label Ganja Records had to appear on this list somewhere, and there's no better mention than its very first release. Label boss DJ Hype made both sides of this record but attributed one to his alias Dopestyle, which must be a play on words. "Computerised Cops," with its hip-hop vocal refrain (a sample of Cypres Hill's "Insane in the Membrane") daring the cops to "come and snatch my crops," is where we're focusing our attention here.

DJ Hype and his pot leaf-stamped 12-inches played an influential role in the fledgling hardcore scene, although hardcore history buffs will note that Ganja wasn't the only breakbeat label to make their logo a pot leaf — True Playaz did this, as well. DJ Hype’s rough inaugural cut was characteristic of the time. It features a drum fill that spins like a fidget spinner, weirdly-pitched keys that clamor with b-boy-meets-rudeboy vocals, and a rave whistle that sits a little too loud in the mix.

Everything about this tune has to do with green, from the name of the artist, track, and label, to the sample of Linval Thompson's reggae homage "I Love Marijuana." Released in 1999, "I Love Marijuana" was alternately titled "Weed Tune," and represents the development of 2-step, a slower and housier permutation of junglism. While jungle, hardcore, and drum & bass repurposed whole breakbeats, 2-step cut up the drum samples into swung one-shot patterns that cruised at a more common house tempo. Its poppier permutations came to dominate the English airwaves in the early 2000s, thanks to star singers like Craig David, who championed England's response to American R&B.

While "I Love Marijuana" was released as an unofficial white label, Dee Kline's underground club hit "I Don't Smoke" broke stoner 2-step and put the subgenre on the radar of bigger labels. DJ EZ, who helped construct the genre's canon with his Pure Garage mix CDs, included the track on a 2000 compilation published by a Warner Brothers subsidiary. In 2017 XL Recordings put it on a sampler attributed to Kurupt FM, the fictional pirate radio station that satirized breakbeat obsessives in the popular British mockumentary TV series People Just Do Nothing.

When it was first released, Electric Medicine's "Legalise It" was wrongly maligned by NME for its bait sample: Peter Tosh's "Legalise It.” Aside from its inescapable cheesiness, the vocal is treated quite nicely with Jamaican dub's traditional use of analog delay and reverb. Plus, it’s laid out over a beat and bassline you simply can't argue with. A crunchy snare and nicely swung hats volley the woozy notes of a subby organ to create a laid-back sort of bump 'n' flex bob.

"Legalise It" and "I Don't Smoke" are extra, but "More Weed" takes it to another level. Grime MCs spit verses about the trials and travails of slanging dro between the sports-stadium-style rudeboy chant that marks the chorus: "More weed more weed more weed more ganja!" This is beyond extra — it's a crash course in the hardcore continuum's conception of "rudeness" for the uninitiated. Compared to the pretty guitar strumming on "I Don't Smoke,” or the sexy bass tones of “Legalise It,” "More Weed" is heavy, dirty, and greasy, making the track closer to another English electronic music variant: grime.

2-step garage's syncopated beat gives the track a stubbed-toe stumble, while "More Weed" jumps up and down with bouts of farting, distorted bass tones. This track is super rude in ways that render it gloriously sucky — its aggressive, artless, and ugly sounds; the blaring, barking, maximalism — and in the right context it would probably destroy a club. The sentiment is just so darn relatable.

Dubstep — as it was originally understood — blended jungle and DnB’s halftime swagger with 2-step and dark garage's jacking rhythms and jazzy instrumental cues to create a fresh take on bass music. Eventually, the American mainstream hijacked the genre and bastardized dubstep into a maximalist iteration known under the “EDM” umbrella. But in the UK, dubstep was incepted during the early aughts in smoky nightclubs where listeners sauntered as they blazed — just like with jungle. Anthems like "Ganja Man" illustrate the genre’s innate connection to Jamaican music, such as the track’s dubbed-out rasta vocals.

"Spliff Dub" was one of the first transmissions from Zomby, who went on to become the antagonistic star of dubstep's forward-thinking strains. The masked UK producer developed a reputation equally marked by missed gigs and his hostile Twitter persona as for his hits. "Spliff Dub" was one of them, with (at least) two intersecting wobble basslines, a big ol' slap of a snare, and the memorable wail of a young boy saying, "One spliff a day keep the evil away."

Pinch's label Tectonic was responsible for some of underground old-school dubstep's iconic tunes from a who's-who of star producers like Skream, Loefah, 2562 (AKA A Made Up Sound) and Peverelist. Adrian Sherwood, a prolific English music producer who worked with the likes of Lee "Scratch" Perry, pushed dub-influenced styles to new ground with his On-U Sound label. "Bring Me Weed" thus united two legacy powerhouses from different generations of Jamaican-British hybrid music history in a rock steady plea we can all get behind.

Without Horsepower Productions, perhaps there would be no dubstep. In the early 2000s this duo became one of the seminal nodes in a certain moody persuasion of dark 2-step garage that paved the way for dubstep a few years later. Their most recent offering, "Reefer Max,” came out last year and veers closers to dubstep's stylistic orthodoxies with an expanding and contracting sub, washy reggae keys, and a rattling 140 BPM rhythm.

It's hard to make out every word the deep voice on this track says, but it seems to have something to do with the medicinal benefits of marijuana — which would be a very apt and contemporary take on the typical weed-related positions espoused on bass-heavy club tunes.

420
MUSIC
UK
HISTORY
MORE...
Catherine Fields
FOLLOW
Catherine Fields is a Hungarian Jew who escaped to Germany, where she currently lives and works as a doctor's tradwife.
Share this article with your friends!
AD
By using our site you agree to our use of cookies to deliver a better experience.
Accept
Decline
MORE FROM MERRY JANE