NEWS
Why the Vape Pen Was Left Out of Canada’s Legal Weed Revolution
AD
Canada’s new legalization program allows cannabis “oils,” but bans concentrates for at least another year, excluding one of legal pot’s most popular products.
Published on November 7, 2018

In September, as the country was starting to get ready for its legalization debut, a curious ad campaign started to show up online and in a downtown Toronto pop-up, featuring the website moniker, notavailableincanada.ca.

It was by a company called dosist. What dosist sells is, essentially, a souped-up vape pen that’s designed to help you consume cannabis in regulated, consistent doses. It’s like an electric toothbrush: you breathe in for three seconds, and the pen vibrates to tell you you’re done. And it comes in a whole bunch of strain flavours, with new-agey names like ‘bliss’ and ‘calm,’ as well as more prurient ones like ‘arouse’ and ‘passion.’

The campaign was a protest of sorts: THC-rich vape pens wouldn’t actually be allowed in Canada when the country started legally selling weed on October 17th of this year. Because the pens don’t conform to a somewhat byzantine set of laws governing what qualifies as a cannabis extract and what counts as a cannabis oil, the extract that the dosist units use isn’t currently legal. Most other vape pens (arguably the most emblematic symbol of the new era of middle-class marijuana) aren’t, either: It was only this October that the licensed producer Aurora announced the release of ‘Aurora Cloud,’ which they claimed were the “only vape-ready CBD products legally available in Canada.”

But “oils” (an at-times both confusing and erudite way of consuming cannabis, relatively speaking) are everywhere and legally permitted. What gives? To the layperson, the difference between ‘cannabis oil’ and ‘cannabis concentrate’ is mostly semantics. For recreational users and medical patients, however, the difference in availability of those products can make a world of difference. Why was the cannabis vape pen — which is pretty much ubiquitous in most cities already, given their availability in grey-market dispensaries — left out of legalization, when the oil dropper wasn’t? 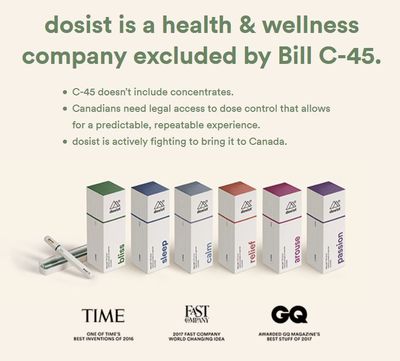 dosist is ready for Canada, if they'll have them; screenshot via notavailableincanada.ca

Cannabis oils and cannabis concentrates are both forms of extracts, but are manufactured with different methods, resulting in a wide range of textures. Concentrates — including those found in commercial cannabis vape cartridges — are made with a variety of solvents (in some cases a petroleum-based one, like butane) in order to separate cannabinoids, including THC and CBD, from the cannabis plant’s other material. Solvents are then purged from the process, leaving behind only concentrated forms of cannabinoids that can be vaporized for inhalation on their own.

Cannabis oils, on the other hand, are a bit simpler: Since THC binds to fats, cannabinoids from the plant mostly just soak into the oil (or butter) as they’re heated together. As oils are too viscous to be effectively vaporized, they’re commonly ingested directly by mouth, or mixed with another food or beverage.

Health Canada, the main regulatory body when it comes to what’s available and what’s not in the legal cannabis market, is concerned with the safety of concentrates. The Cannabis Act prohibits cannabis producers from “alter[ing] or offer[ing] to alter the chemical properties of cannabis by the use of an organic solvent.” An organic solvent, they say, “means any organic compound that is explosive or highly or extremely flammable,” including petroleum-based solvents like butane used in the production of concentrates.

Concentrates with high THC content, Health Canada said to The Leaf News, “present unique health and safety risks and require careful study in order to develop appropriate regulatory safeguards. And as such, we are taking a cautious, public health approach to the development of these regulations, based on the best evidence available."

The issue comes down to potency as well. Canada’s cannabis regulations set out clear limits on how strong the concentration of THC can be in an oil. “The oil that we’re allowed to sell is limited to 30 milligrams (mg) of THC per millilitre (ml),” says Jordan Sinclair, VP of communications with Canopy Growth, the licensed producer behind several brands of cannabis, including Tweed and Spectrum. Red Cannabis Oil, a product from Spectrum Cannabis, has 26 mg of THC per ml, and comes in a small 40 ml bottle that costs $90. 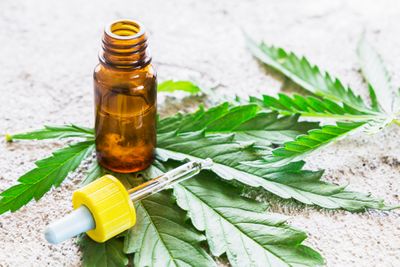 While this offering expands the diversity of legal consumption methods for patients and consumers, it still imposes limits on the ways cannabis can be ingested and used to treat medical ailments.

“The typical user with epilepsy requires 2 grams of weed to deal with seizures, a time consuming and very large amount of flower to smoke,” said James Casey, the president of MJN Express, an illicit mail-order dispensary that operates out of Markham, Ontario, in a press release this past August. “Omitting some of cannabis's most innovative and popular products leaves a significant segment of the cannabis market unaccounted for. Leaving many new and alternative methods of cannabis consumption on the sideline, in favour of strains (hybrid, indica and sativa) could be a disaster come October.”

"Hopefully everyone can get what they need, and in the long-term recreational legalization will be fantastic,” said Casey, “But out [of] the gate, it doesn't look like it."

Even though recreational use was legalized last month, Health Canada is taking another year to figure out what the rules will be for concentrates and edibles. They say, however, that “edible products and concentrates will be legal for sale approximately one year after the Cannabis Act came into force on October 17th, 2018.”

Cannabis oils of any kind used to be totally illegal under Canada’s previous pot prohibition schemes. In 2009, police in Victoria, B.C. arrested a man named Owen Edward Smith, working for a compassion club called the Cannabis Buyers Club of Canada, for making a variety of oils and edibles. His detention kicked off a constitutional challenge that rose to the Supreme Court of Canada: Smith and his lawyers argued that restricting medical cannabis users to using dried flower only was an infringement of their rights. Patients, they contended, had a right to use cannabis in other forms like oils and edibles, and in 2015, the judges agreed, finding that “the prohibition on non-dried medical marihuana [sic] undermines the health and safety of medical marihuana users by diminishing the quality of their medical care.”

That led the government to develop regulations around what kind of extracted cannabis products, like oils, would be allowed, then under the medical system. “The first oil regulations were designed to deal with the Smith case,” says Sinclair. The Smith case, he says, “basically said that it was arbitrary” to restrict medical cannabis to dried flower. The government, however, didn’t blow the doors open on extracts. “The regulations are very prescriptive,” adds Sinclair. “It generally had to do with potency in the beginning.” 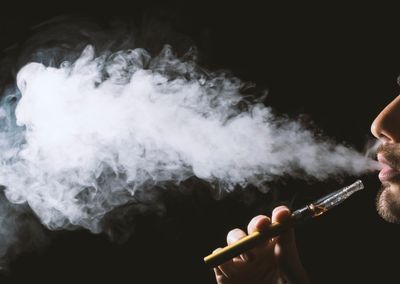 If this vape pen contains more than 30 mg of THC per ml, it's still illegal in Canada; photo via iStock

While consumer complaints about the availability of vape pens are principally rooted in convenience and preference, the restrictions around potency limit the medical possibilities of available cannabis products. Sinclair says a loosening of the restrictions around extract potency could lead to “a whole lot of new products, and a whole lot of new research.” Researchers who study the use of cannabis to reduce opioid dependency, for instance, are especially interested in the viability of high-potency concentrates. Canopy funds such research at the University of British Columbia. “There’s a school of thought that says that highly-concentrated forms of cannabis could help people addicted to opioids,” says Sinclair, but at the moment “there is no federally legal form” available to people.

For researchers, concentrates have the advantage of being more consistent and controllable than dried flower. One recent study by researchers Beth Weise and Adrianna R. Wilson-Poe in the journal Cannabis and Cannabinoid Research found that when patients were using cannabis to treat opioid use disorders, that the use of dried flower sometimes had varying effects. “Because the dose of cannabinoids and phytochemical makeup of whole-plant cannabis have significant impacts on physiological responses (such as tachycardia) and subjective experiences (such as anxiety), additional research is needed to characterize maximally efficacious treatment protocols,” they wrote.

At least one producer is pushing forward with cannabis vape products despite current federal restrictions, as illustrated by the debut of Aurora’s ‘Cloud’ CBD cartridge, compatible with most commercial vape pen batteries commonly used with nicotine e-juice. Aurora professes that they’re “the only licensed producer to have successfully navigated the technical and regulatory challenges required to bring this product to market.” It’s high in CBD — 550 mg for 1 ml of oil — but low in THC, containing only 30 mg, which keeps it under the legal threshold for THC; no such limit exists in cannabis regulations or statutes for the quantity of CBD in a given product. (Aurora did not respond to MERRY JANE’s requests for comment.) 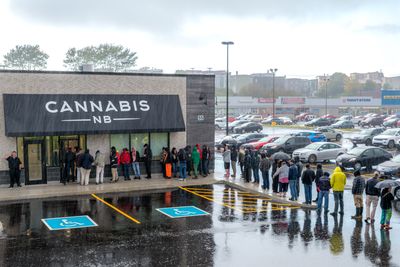 Customers wait to buy legal weed (but not vapes) in New Brunswick, Canada on October 17, 2018; photo via iStock

Given that concentrates, including those in vape pens, need to contain much higher levels of THC (think hundreds of milligrams) in order to be effective for inhalation, Canada’s current regulations essentially ban THC vape products while allowing CBD varieties. Cannabis oils, alternatively, can still be effective for users at legally allowable potencies, due to direct ingestion of greater amounts of THC-laden liquid.

Health Canada says that, as part of their consultation with stakeholders, that the reception of these regulations was “mixed.”

“On the one hand, many respondents did not support the proposed limit, suggesting that it was either too low or that there should not be a limit at all,” said Tammy Jarbeau, spokesperson for Health Canada. “In contrast, other respondents saw the proposed limit as a prudent safeguard to mitigate against the risk of accidental or overconsumption of a product class primarily intended for ingestion.”

The legalization of cannabis is a process, not a finished product, and as is often pointed out by industry insiders, what legalization looks like one, five, or ten years down the road is anybody’s guess. Products like vape pens will undoubtedly have a solid (if not dominant) position in the Canadian cannabis industry — just not yet. It’s a good bet that in a year or so, Canada’s concentrate policy will change, but until then, maybe don’t get rid of your grinder.

NEWS
420
MEDICINE
LEGALIZATION
MORE...
IN THIS STORY
CBD
Click to shop at our CBD store
Kieran Delamont
FOLLOW
Kieran Delamont is a writer in Ottawa, Ontario, who writes about cannabis culture, politics and industry, and has appeared in Vice News, The Outline, Now Magazine, and others. You can follow him on twitter at twitter.com/k_delamont.
Share this article with your friends!
AD
By using our site you agree to our use of cookies to deliver a better experience.
Accept
Decline
MORE FROM MERRY JANE