CULTURE
Heady Entertainment: Soar Sky High with "Astronomy Club" and Burn One to Burial
AD
This week, get astronomically lit to the comedy sketch troupe "The Astronomy Club," the re-release of "Big Trouble in Little China," and a new compilation of tunes from the one and only Burial.
Published on December 6, 2019

In terms of new big-screen movie releases, it’s all seeds and stems right now as the studios get ready to roll out that primo blockbuster kush going into the holiday season over the next few weeks. No worries, though. With the temperatures dropping, that’s all the more reason to stay in, light the best kind of fires, and enjoy new streaming, music, and cult classic treats at home.

Lit laughs dominate premieres this week in the form of Astronomy Club on Netflix, Toast of London on IFC, and Work in Progress on Showtime. Even Fox is getting in on edgy humor with the premiere of its angry holiday sitcom, The Moodys.

Our vintage cult flick picks are a riot of mad, hyper-’80s greatness just made to be enjoyed while passing a bong: the John Carpenter-Kurt Russell masterpiece Big Trouble in Little China; the deliciously sleazy Angel film series; the horror satire The Stuff; and even the legendary schlock-in-the-sewer shocker CHUD.

And new music aimed at your weed-elevated ears arrives this week from Blueface, Burial, Max B, and Q Money. So let’s get straight — but not “straight” — to this week’s recommendations.

As the first all-black Upright Citizens Brigade troupe, The Astronomy Club has already made history. Now the group’s new self-titled Netflix sketch comedy proves that they also routinely create hilarity with their smart and absurd brand of humor. “Magical Negro Rehab” is already a classic gut-buster. Pack a pipe, lean back, and check out what other crack-ups the Astronomy Club has in store.

The Showtime series The L Word broke major ground back in 2004 simply by focusing on a group of lesbian women. A lot’s changed since the show ended a decade ago, from the mass emergence of queer identity and culture to, of course, the crumbling of cannabis prohibition. OG L Word cast members Jennifer Beals, Katherine Moennig, and Leisha Hailey return, with new stars Arienne Mandi, Leo Sheng, and Rosanny Zayas representing Generation Q.

Anybody who’s gotten stoned to Dennis Leary in the pitch-black cult Christmas comedy The Ref (1994) knows that he spikes the holiday spirit with spit and spite like nobody else. The Moodys, a six-episode sitcom miniseries, perfectly casts Leary as the patriarch of the title family as they howlingly battle through the supposed season of good cheer. Rounding out the ferocious funny folks on-screen are Elizabeth Perkins, Jay Baruchel, Francoi Arnaud, and Chelsea Frei.

Matt Berry, a stoner comedy icon for What We Do in the Shadows alone, has been slaying UK audiences with Toast of London for three seasons. IFC is importing the series, in which Berry stars as Steven Toast, a bombastically clueless stage actor with a hilariously high opinion of himself. Get high, and you’ll have a high opinion of his hilariousness, too.

Chicago comedian Abby McEnany plays a Chicago resident named Abby McEnany in Work in Progress, an eight-episode sitcom about love, sex, gender, and potential suicide. McEnany co-created the show with her improv partner Tim Mason, and it’s both funny and moving — and even more so when you add marijuana.

In 1984, the down, dirty, great, and grimy exploitation flick Angel packed theaters and became a cult favorite on home video by spelling out the movie’s exact contents in its tagline: “Honor student by day… Hollywood hooker by night!”

Angel told a tale of teenage tawdriness amid the scummy back alleys of Tinseltown with crazy, low-budget verve that kept joint-passing audiences cheering the hard-hustling heroine and begging for more. That wish came true the following year with the equally outrageous sequel, Avenging Angel, where our streetwalking warrior cleaned up the gutters as only she could. Angel III: The Final Chapter leapt forth four years later to make sure the rough trade stayed out of commission.

Russell stars as Jack Burton, a two-fisted trucker who hunts for his kidnapped fiancée in San Francisco’s Chinatown, where he runs afoul of 2,000-year-old sorcerer Lo Pan (James Hong). Mega-impact action, mind-melting sorcery, and eye-bombing visual effects erupt from there.

Watching Big Trouble in Little China straight will make you feel like you’re stoned. But don’t do that (please!). Pick up Shout Factory’s overwhelmingly extras-loaded collector’s edition package, blaze up a mystic fire of marijuana, and get ready for a thunderous, skull-spinning thrill ride that conjures magic like no other movie.

“Cannibalistic Humanoid Underground Dwellers!” That’s what CHUD stands for. Try really pondering that concept with a lungful of smoke, and try not to cough it out, laughing. Then take another hit, and think harder about it. What if the sewers of New York City really were crawling with CHUD creatures who emerge only to feed on distracted passersby? Depending on the strain in your brain at that moment, suddenly this goofy movie is scary!

CHUD has been a pop culture punchline, particularly among stoners, since its 1984 grindhouse debut, even warranting mentions and a quick subterranean cameo on The Simpsons. Arrow Video’s new collector’s edition CHUD package now presents the actual movie in beautiful high-definition and it’s as crammed with great extra features as the underground pipes on screen are with green-skinned, bug-eyed flesh eaters.

“Are you eating it... or is it eating you?” That’s the question posed on the poster of The Stuff, B-movie maven Larry Cohen’s incendiary horror satire guaranteed to make you laugh, scream, and maybe even eat and then puke up a delicious, yogurt-like substance that turns consumers into zombies and devours everything in its path like an irresistibly tempting Blob (okay, that only happens in the movie). The Stuff is riot that may forever after turn you paranoid about what you pick when seized by the munchies — and, when watching and smoking along to Arrow Video’s smashing new Blu-ray version, you’ll love genuinely love this Stuff! 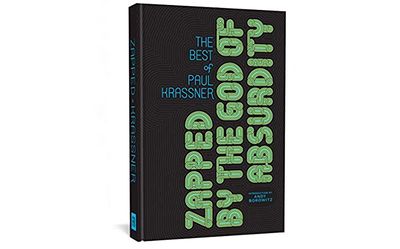 As one of the original yippies, early editor of High Times, and publisher of the uproariously rabble-rousing underground screed-sheet The Realist, Paul Krassner pioneered radical thought by way of anarchic laughter and higher living through — yes — getting high (also check out Krassner’s other books specifically on weed and psychedelics).

Zapped by the God of Absurdity collects Krassner’s most wickedly witty and intoxicatingly insightful satirical writing and frontline-of-weirdness journalism. It includes his outrageous takedown of the Kennedy myth that made headlines in the late ‘60s, his reporting from the trials of radical heiress Patty Hearst and “Twinkie Killer” Dan White, and stories of his high hang-outs with his fellow cultural outlaws on the order of Charles Manson, Lenny Bruce, Johnnie Cochran, Ram Dass, Larry Flynt, and Robin Williams.

Find the Beat
By Blueface
Get It: Apple Music

One of the most anticipated debut albums of 2019 is coming in right at the buzzer and, oh yes, Find the Beat by Blueface most definitely scores. From its cover art that conjures a hip-hop Wizard of Oz trip to it’s A-plus production, and, of course, Blueface’s wild rhymes, Find the Beat is a sonic sensation made for your smoking pleasure. Now consider the guest list — DaBaby, Gunna, Jeremih, Lil Baby, Ambjaay, NLE Choppa, YBN Nahmir, and Stunna 4 Vegas — then press play and start puffing.

House Money
By Max B
Get It: Apple Music

Since 2009, New York rap giant Max B has been serving a 75-year sentence, but there’s no locking up his talent, energy, and still hugely looming presence over hip-hop. Cast in point: Max B’s new EP House Money, which is seven blazing tracks loaded with guest stars, including French Montana, Jadakiss, Cam’ron, Dave East, and A$AP Ferg. Torch one up to the creative liberation under any circumstances.

How You Gon Hate
By Q Money
Get It: Q Money Official

Q Money may be facing some real-world complications at the moment, but the ability to drop a dope new disc does not rank among the Cleveland rapper’s dilemmas. Featuring drop-ins from 24 Heavy and YFN Lucci, How You Gon Hate is highly enjoyable — emphasis on the word “highly.”

After a dozen years since his last long-player, mysterious UK electronic wizard William Emmanuel Bevan — better known as Burial — has personally selected and sequenced 17 killer singles for his new comp, Tunes: 2011 to 2019. For fans, this is the one-stop Burial ground we’ve been waiting to smoke to. For newcomers, Tunes is a perfect introduction to this unique artist — and a perfect complement to the most top-shelf reserves in your stash.

MUSIC
TELEVISION
ENTERTAINMENT
MOVIES
MORE...
Mike McPadden
FOLLOW
Mike McPadden is the author of "Heavy Metal Movies" and the upcoming "Last American Virgins." He writes about movies, music, and crime in Chicago. Twitter @mcbeardo
Share this article with your friends!
AD
By using our site you agree to our use of cookies to deliver a better experience.
Accept
Decline
MORE FROM MERRY JANE