CULTURE
Heady Entertainment: “Broad City,” Casey Veggies, and the Dawn of a “New Breed”
AD
This week, bongo-banging stoner legend Matthew McConaughey lights up the multiplex in "Serenity," while small-screen offerings include the kickoff of the final season of "Broad City."
Published on January 25, 2019

This week, bongo-banging stoner legend Matthew McConaughey lights up the multiplex in Serenity, while small screen offerings include Korea’s epic zombie series Kingdom, fresh chills from Conversations With a Killer: The Ted Bundy Tapes, and the kickoff of the final season of Broad City.

The new thriller Serenity has sailed into theaters a bit below the radar, especially given its A-list cast and a plot with ample potential for paranoia-loving potheads. Matthew McConaughey stars as Baker Dill, a fishing boat captain who experiences supernatural visions and is utterly obsessed with catching a giant.

A real storm hits Baker, though, when his ex-wife Karen (Anne Hathaway) asks him to take her current, abusive husband (Jason Clarke) out to sea and push him overboard into shark-infested waters. Baker considers it, thinking about his videogame-playing young son who still lives with Karen and this violent asshole.

All this leads to a twist ending that, whether you’re high or not, you will not believe made it into a Hollywood movie. It’s that off-the-rails insane—so absolutely do be high when you see it.

Not just one of the 21st Century’s absolute highest achievements in stoner humor, Broad City is also one of the most hilarious sitcoms of all time. Over five seasons, the show has rightly made lit laugh icons of series creators and co-stars Abbi Jacobson and Ilana Glazer, and forever rewrote the possibilities of combining brilliance with copious marijuana on TV.

The just-debuted season five is serving as Broad City’s swan song and it’s going out on a series of hugely appropriate high notes. Episode one details our heroines celebrating Abbi’s 30th birthday by walking the entire length of Manhattan. The joint-passing journey is just as outrageous and uproarious as you’d expect, even as the specter of maturity looms. Inhale deep and pour one out for the dank duo.

“Conversations With a Killer: The Ted Bundy Tapes”: Season One
Watch It: Netflix

True crime documentaries are all the rage now and smoking pot ups the paranoia potential of such unnerving entertainments to terrifyingly awesome new levels. That stated, nobody would have wanted to be wasted around the likes of Ted Bundy, but marijuana will only enhance the impact of Conversations With a Killer: The Ted Bundy Tapes.

Based on more than 100 hours of audio interviews with Bundy, who raped, tortured, and murdered dozens and possibly hundreds of victims during the 1970s, Conversations With a Killer also incorporates new discussions, vintage news clips, courtroom footage, and other materials in four episodes guaranteed to severely freak you out. Smoke carefully.

From South Korea and set during the 15th Century Joseon dynasty, the epic TV series Kingdom injects shocking life into a riveting historical saga of royal intrigue by raising the dead.

After the reigning king succumbs to a bizarre illness that turns him into a flesh-famished zombie, a plague besets the country that similarly afflicts both royalty and peasants alike. Palace corridors and rural farm roads everywhere explode into blood-soaked scenes of carnal horror. Ju Ji-hoon plays the crown prince determined to defeat the zombie apocalypse while also keeping his nation’s political enemies at bay. As weed-worthy hybrid entertainment, Kingdom rules.

The Other Two is a new sitcom from former SNL writers Chris Kelly and Sarah Schneider about the bombastic rise of 13-year-old pop music sensation Chase Dreams (Case Walker), as seen through the frustrated, disbelieving eyes of his struggling older siblings — 28-year-old failed actor Cary (Drew Tarver) and 30-year-old general failure at everything Brooke (Heléne Yorke). They’re the “other two” of the title.

Aside from the gut-busting idiocy of Chase Dreams’ Bieber-like success, Molly Shannon is also a riot as the family’s stage mom, as is veteran funnyman Ken Marino as the kid’s instantly-oily manager. Cary and Brooke do all they can to cope and their inability to do so makes for high hilarity (especially when you’re high yourself).

One of the craziest, sleaziest, most ferocious cult-favorites of the ’80s, 10 to Midnight is a combination of Death Wish, a slasher movie, and a sexual nervous breakdown! If there is one Charles Bronson movie that demands to be watched while thoroughly baked, it is this one.

Legendary movie tough-guy Bronson plays Leo Kessler, a hard-boiled Los Angeles detective who’s hot on the hunt for of Warren Stacy (Gene Davis), a homicidal maniac who stalks women, breaks into their homes, and then strips naked before he kills them.

As it always is in these movies, the legal system is stacked against the gun-toting good guy and in favor of the freaky-deaky psycho killer. So when Bronson finally catches the creep, a technicality cuts the suspect loose — so he can take his clothes off and take still more victims’ lives.

Double-crosses, planted evidence, sick murder sequences, and Bronson’s rage all lead to one of vigilante cinema’s most satisfying payoffs. Still, the moment where most 10 to Midnight fans tend to spill their bongs due to belly-laughing hysteria occurs when Bronson confronts the killer with a suction-cup sex toy and barks at him, “What’s this for, War-ren? What’s the matter—cat got your tongue? It’s for jackin’ off, isn’t it?!” Don’t miss it!

In Nemesis, Gruner stars as Alex, an LAPD bounty hunter in the year 2027 who also happens to be a cyborg. Alex finds it tough to be a part-man, part-machine who works for the authorities at that point, as a rebel force of cyborgs known as the Red Army Hammerheads is rising up to conquer humanity — and he’s not entirely unsympathetic to them. However, after evil human overlords implant a bomb inside Alex that will go off in three days if he doesn’t complete a mission against the Hammerheads, it’s game way, way on.

Nemesis is a breakneck facebasher made even more fun to smoke to by Gruner’s charismatic fighting skills and the movie’s hilariously dated displays of “cyber culture.” Plug in and breathe deep. 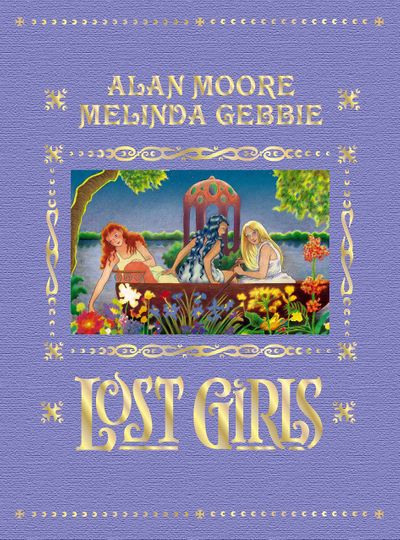 Comic book visionary Alan Moore (Watchmen, V for Vendetta, From Hell) shocked the world in 2006 by publishing Lost Girls, a controversial masterwork illustrated by Melinda Gebbie that forever remade readers’ perceptions of the heroines from their favorite childhood stories—which already seemed plenty tripped-out to begin with.

Sixteen years in the making, Lost Girls has been praised, banned, debated, and cherished since its debut. This new expanded edition collects all three volumes of the original series with 32 new pages of artwork and essays, all bound up in a beautiful, hardcover package just perfect for rolling joints on before you crack it open and dive in.

Named for one of the more ferocious deities on Games of Thrones (which is saying something), The Drowned God erupts molten metal from Philadelphia that dares to dream beyond just darkness. I’ll Always Be the Same, the group’s debut on Solid State Records, pours down the expected heaviness required of proper stoner rock, but flecks the weight with flights of shoegaze, screamo, and deft, left-turn moments that defy any such simple classifications. Smoke up while listening and expect a similarly adventurous inner experience.

“New Breed”
By DAWN
Get It: Bandcamp

It might have once been hard to imagine a former member of girl group Danity Kane and pop duo Ditty Dirty Money astoundingly summoning up surreal flights of vast, visionary, sublime space music, but, under the single moniker DAWN (or, alternately, D∆WN), that’s exactly how Dawn Richard has transformed her art and her career.

New Breed, Dawn’s latest, launches from the roots of Richards’ own childhood spent in the Washitaw Nation and rockets straight into the cosmos on a comet trail of futuristic beats and cutting-edge alt-pop. Turn in, toke up, blast off, and stay there—DAWN is the starship captain now.

“Life Changes”
By Casey Veggies
Get It: iTunes

Life Changes, the eagerly awaited mixtape from longtime Earl Sweatshirt compatriot Casey Veggies, builds both sweetly and aggressively upon the LA-based innovator’s mood-and-mind-altering body of work. Among those joining Casey here are Phil Beaudreau, Dom Kennedy, BJ the Chicago Kid, and all these Changes are absolutely positive.

420
MUSIC
TELEVISION
CELEBRITIES
MORE...
Mike McPadden
FOLLOW
Mike McPadden is the author of "Heavy Metal Movies" and the upcoming "Last American Virgins." He writes about movies, music, and crime in Chicago. Twitter @mcbeardo
Share this article with your friends!
AD
By using our site you agree to our use of cookies to deliver a better experience.
Accept
Decline
MORE FROM MERRY JANE