CULTURE
Harvest Daze III: Growing Cannabis Is a Blessing — But Ain't What It Used to Be
AD
"The glorious days of Cottage Industry Cannabis are over, at least in the legal realm. It’s a whole new bud game."
Published on November 15, 2018

For Harvest Daze parts I and II, visit here and here

Our house hasn’t been this neat in November for many years. It seems odd — the floors aren’t covered in clear plastic, littered with random dead cannabis leaves and stalks. Couches aren’t draped in white cloth, and the constant snipping of scissors is not a perpetual background sound. The kitchen is not full of various young chefs trying their hand at some vegan coconut oil concoction. Sleeping bags, clothing, and electronics are not piled in every corner.

In the dark ages of being an underground grower up in the hills of The Emerald Triangle, everyone slept in a tent and used outhouses. It was a simple hippie life. Somehow back then, even in rainy years, the “weed” was dried and trimmed under semi-open canopies, and meals were shared around the open fire. Yet, as years went by, people saved some money from the crop and they began building homes — some were quite extravagant, while most retained a back-to-the-land style.

In the early years at our ranch in Mendocino, a small, two-room cabin built in 1926 was the only structure on the property. When our friends and family came up to give us a hand during harvest, we’d have up to seven people and a dog crammed in a 15’ x 20’ room. By day, we set up a folding table and trimmed there; then we’d take it all apart every night. Out would come the sleeping bags and mats and we’d share laughter and hear snoring and smell stinky socks (the ganja can usually cover that, though). It really was a kind of bizarre Indian Summer camp for stoner trimmers. Instead of sleeping under the stars, we gazed into the upside-down forest of cannabis branches hanging and drying as they dangled from the ceiling over our heads. The air was heavy with terpenes and chlorophyll. It was a total cannabis zone — we literally lived and breathed it. Yet, we always managed to get the work done and have fun while doing it. 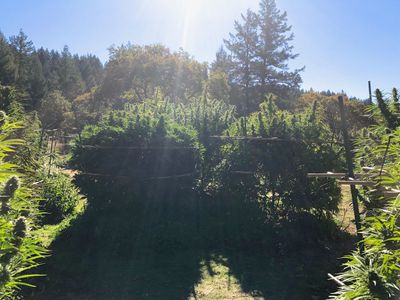 Over time, conditions improved at our house, rooms were added and drying facilities constructed. Like most farmers, we developed a solid crew of favorite trimmers from our pool of dear friends, who returned year after year for at least a few weeks at a time. Come to think of it, during our first two years up here, we worked by kerosene lanterns and battery-operated lights. That was before we had a solar power system or running water. Then, we had to carry water in five gallon jugs from the spring to the cabin. There was no cell service or satellite dish, so making a phone call required a 20-minute drive to the top of the hill, where it might work if you had the right carrier. Most people didn’t bother and accepted the incommunicado, off-the-grid, monastic life of a trimmer. We also had no cable TV or radio reception. Media disconnection becomes a wonderful meditation that puts you in The Zone. 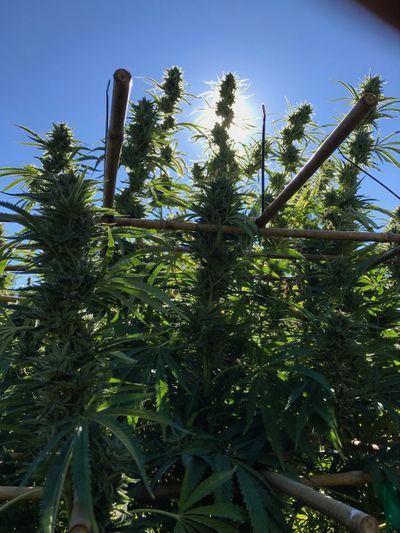 Harvest generally starts in late September or early October (you can read our two recent columns on it here and here). Traditionally, that was when the house would start filling up with familiar faces from years past, people who came equipped with their own special scissors, select food and drinks and favorite music. Everyone had their “trimming clothes,” the same funky cozy pants and sweatshirt they had worn here for many trim seasons. We’d set up the table and cover it in plastic, get out the trim trays, sterilize everything, and set up the dog gate so we had a clean space. Some of us liked sitting at a table to manicure the Girls, while others always preferred the comforts of the couch. What really mattered — and still does — is that the person behind the scissors is alert yet in The Zone, touching the bud as little as possible, while still sculpting each one like Michelangelo.

We became a family each harvest season, a Cottage Industry in the truest sense of the term. A favorite pastime during long hours and days of snipping away was to get lost together in audio book stories. We would sing and laugh and gossip and have hours of silence, as well. 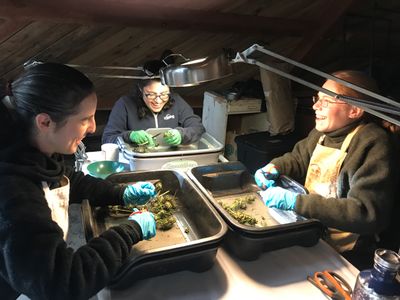 In this new era of cannabis legality, everything is becoming so up-to-date. Technology has come to the backwoods of Mendocino — for better or worse, I can’t say. Now the ranch has satellite connectivity and so instead of everyone talking or listening to books-on-tape, each one is intently focussed on his or her own device. Music follows new young farmers and trimmers everywhere on their phones, and hopefully the plants enjoy it. But the glorious days of Cottage Industry Cannabis are over, at least in the legal realm. Suddenly, the way we always did things in the traditional cannabis world are considered unsafe, toxic, dangerous, discriminatory — and, hence, illegal. It’s a whole new bud game.

The State of California now requires each plant to have a unique identifier (i.e. a barcode) attached to it, and the Water Board requires meters on all water sources. The Department of Fish and Wildlife require a permit and demand a fine for every culvert and pond installed illegally. According to the Mendocino County Building Code, processing, packaging, and manufacturing — work all previously done in the home — now need commercially-permitted buildings with satellite-connected security systems and full ADA-compliant facilities. If the farm buildings are not up to commercial code, only the owners and family members can work in them.

It took awhile for this to sink in, but the reality is this: no more trimming and packaging is allowed on our ranch unless only Swami and Nikki, as owners, do the work. We are developing our magic powers, but haven’t quite yet figured how to crunch the time and space to do it all. Fortunately, our team members are allowed to work outside, and in the garden, because they are not inside a building, which just might possibly collapse and hurt them. That is a good thing. 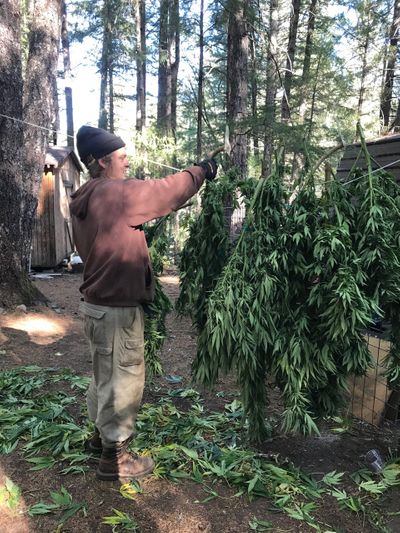 As licensed cultivators in the State of California, we are allowed to grow the cannabis plants, harvest, and dry them. When we take the branches down from the netting, where they have been drying, they are “limbed” to about 18” long and put loosely in open cardboard boxes. The curing process will continue in the open boxes in a cool dark space. When the stems crack and the flowers are dry, they are bucked down on the stem to approximately 6” in length. They are then placed into large plastic tubs lined with unbleached brown Kraft paper. Soon the flowers will be closed up tightly in large oven bags and sent off with the distributor to be trimmed, tested, and packaged at the processing center.

Sniff sniff. Kind of makes us feel like parents sending the little ones off to school for the first time. The thought of not enjoying that precious time of patiently manicuring the Girls into their beautiful state of perfect bud-ness will be missed. The house seems so quiet… and clean.

Off the flowers will go: weighed, securely wrapped, entered into the track-and-trace system, and accompanied by a signed Transportation Manifest. An armored refrigerated van will come out to our ranch at the end of the road, load up, and carry fifty pound batches south to a safe place for processing, where they will be well taken care of. We are even making sure the trimming workrooms will be comfortable — with couches, art on the walls, and, yes, audiobook options. Swami Select insists that all our flowers are hand-watered, hand-trimmed, and hand-packaged. That takes a special, calm environment.

In the end, it’s really OK that this part of the process won’t happen here at our ranch any longer. After all, The Zone is not a place, but a state of mind.

AGRICULTURE
LEGALIZATION
CALIFORNIA
HISTORY
MORE...
Nikki and Swami
FOLLOW
Known as "The Cannabis Couple," Nikki Lastreto and Swami Chaitanya have been proudly promoting cannabis use for decades. As cannabis cultivators in Mendocino County, the heart of the legendary "Emerald Triangle" region, Nikki and Swami are behind the brand Swami Select, producing taste and pure flowers grown in full sun with organic methods, plus that extra little Swami touch.
Share this article with your friends!
AD
By using our site you agree to our use of cookies to deliver a better experience.
Accept
Decline
MORE FROM MERRY JANE