CULTURE
Baked to Perfection: Chef Michael Magallanes Mixes Marijuana and Molecular Gastronomy
AD
We talked to the Opulent Chef maestro about cannabis powders and the Bay Area culinary scene before the kitchen magician shared a recipe for some fancy, infused parsley root.
Published on November 14, 2018

When it comes to cannabis infused edibles, we have been long conditioned to conjure images of brownies, cookies, space cakes, and other THC-packed sweets. But as legalization has spread, infused dining has enjoyed its own parallel growth. In San Francisco, Chef Michael Magallanes is at the forefront of that elevated culinary evolution.

Honing a love for cooking since he was a teenager, Magallanes pursued his culinary dreams to their furthest extent, traveling extensively through South America before settling in the City by the Bay. There, he trained behind the line for a decade straight, eventually becoming a chef at Michelin-starred restaurants Aziza and Mourad.

Known for his intense attention to detail, molecular gastronomical techniques, and creativity, Magallanes left the hustle and bustle of the fine dining restaurant scene to explore how food and cannabis can be mixed in innovative ways.

In 2016, Magallanes launched Opulent Chef, a series of heightened private dinners and cannabis workshops, bringing his highly technical expertise and imagination to the world of THC and terpenes. Paying the same attention to his cannabis infusions as he did Michelin-starred meals, Magallanes tailors the potency of dishes to each individual guest’s tolerance, concocts unique infusions using marijuana powders and milks, and prefers his dinners to be alcohol free.

MERRY JANE talked to chef Magallanes to learn more about his infatuation with ice water hash, his molecular gastronomy delights, and to give you a look behind the curtain at his recipe for a cannabis-infused parsley root entree. With Thanksgiving coming quick, the epicurean-friendly vegetable dish is sure to heighten your Turkey Day experience in more ways than one.

*Hint: If you can’t find ingredients like xanthan gum and agar agar at your local supermarket, try a specialty food store or look online! 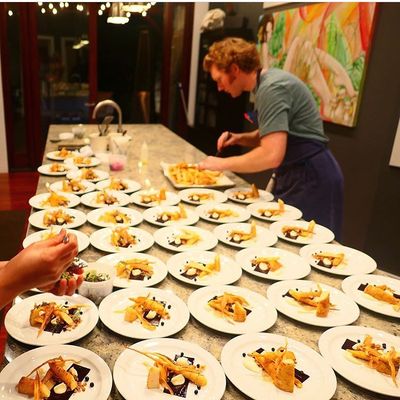 Place 1 pound of butter into a pot over medium heat. Cook until solids are dark brown, but not burnt. Pass through a chinois and cool. Infuse desired amount of decarboxylated cannabis into butter at 85 degrees C for 4 hours depending on your individual tolerance level.

Place all ingredients except the almonds into a pot and whisk until xanthan gum is hydrated. Add almonds and reduce liquid over medium heat until 300 grams remains after it is passed. Passed through a chinois and add liquid to a blender. Blend on low, slowly drizzling the infused brown butter into the blender, keeping the mixture emulsified. Season with salt as desired.

Scrub and rinse parsnips very well. Dry and toss with olive oil and salt. Place in a hotel pan with enough water to cover bottom of pan. Cover with foil and bake at 425 degrees F until very tender. Allow to cool, then peel and discard skin. Reserve the inner meat.

Place gellan block, parsnip, and vanilla into a blender and blend until very smooth. Add creme fraiche and blend until just incorporated. Pass through a chinois and vacuum air out in cryovac machine.

Add vinegar, sugar, and water to a pot. Bring to a boil over high heat. Pour hot liquid over the huckleberries and allow to sit until room temperature. Store in the fridge until ready to use. Ideally make these 2 days ahead of time. 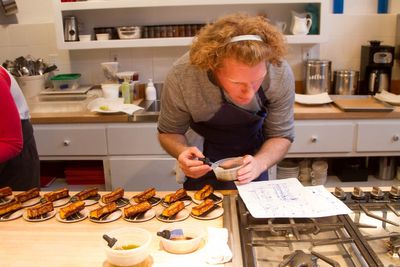 Put all ingredients into a pot over high heat. Bring to a boil, stirring occasionally. Blend contents until very smooth. Pass through a chinois and cool.

Soak gelatin in ice water for ten minutes until hydrated. Add agar and base to a pot. Whisk and let sit for ten minutes. Bring to a boil over medium high heat until agar is fully hydrated, whisking constantly. Remove from heat, remove excess water from gelatin, and gently stir gelatin into base until. Pour into flat sheet trays until 3 millimeter thick. Allow to cool on even surface. Once cool, cut into 1 1/2 inch by 5 inch rectangle. Slide offset spatula underneath the rectangle to release from the sheet tray. Store portioned veil on sheets of parchment until ready to use. 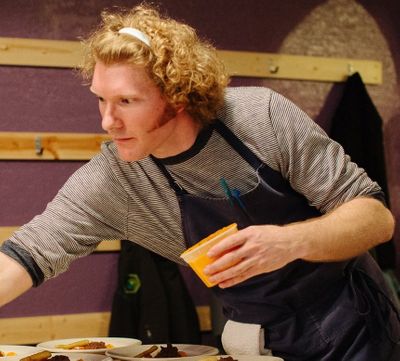 Scrub and rinse parsley root very well. Dry and toss with salt, spice mix, and olive oil. Place in hotel pan with enough water to cover bottom of pan. Place butter and thyme around inside pan. Cover with foil and bake at 425 degrees F until tender, about 25 minutes. Remove foil and bake for another 10 minutes uncovered. Allow to cool. Once cool cut into desired shapes.

Place honey,  brown sugar, coconut oil, and salt into a pot and bring to a simmer on very medium heat until sugar is melted. Pour over oats and thoroughly mix until oats are evenly coated. Place onto sheet tray and bake at 350 degrees F, stirring occasionally, until oats are golden brown. Allow to cool. 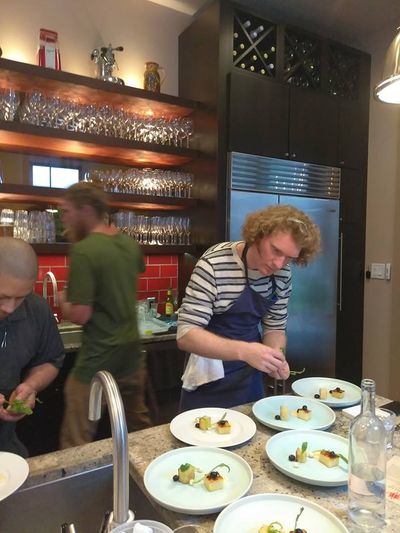 MERRY JANE: You come from the world of fine dining, with experience at two Michelin starred restaurants in San Francisco. When did you first start working with cannabis and how did that come about?

Michael Magallanes: I first started working with cannabis when I broke out of the restaurant scene to create a high-end private chef company, Opulent Chef. The reason I was drawn to creating cannabis-infused dishes is it's an ingredient that is unexplored. The idea of opulence in modern restaurants has been redefined from its traditional meaning of truffles and caviar overly-used on every dish, to using both common and unexplored ingredients with exceptional skill in preparation, creating an uncommon deliciousness on the plate. I feel that by using exceptional skill in preparing cannabis, my showcased artful creations will exude an uncommon deliciousness on the plate, too. We are also playing around with non-infused dining experiences where we pair hash and rosin with courses like we do with wine currently, and that’s something that is working exceptionally well. Fine dining is undergoing a magnificent gestalt shift and cannabis is at the forefront.

You left the world of fine dining restaurants to launch your cannabis-focused private dinners and workshops, Opulent Chef. How difficult was the decision not only to leave the top tier of the restaurant world, but to focus on cannabis?

For me, it wasn't that difficult. I feel that I've worked in high-end restaurants in managerial and creative roles long enough to give me the skills and expertise needed to create my own concept and become successful, and I don't have a desire to keep working for other people anymore. How has San Francisco’s shifting dynamics as a city affected the culinary scene?

It definitely has changed the way people eat. We see a lot more food delivery services, whether it's food that’s already been prepared or raw ingredients with recipes attached. There is a larger community of people that like the concept of a fast-casual restaurant, as well, I think. On the other side, we have a ton of new money millionaires that are able to support a lot of the very high-end establishments. A ton of restaurants have opened fairly recently that have the financial support from the community. The city also has a large workforce of personal chefs that work for executive families full-time at their homes.

Using more than just oils and butters, you’ve helped innovate and introduce more intricate forms of molecular gastronomy to infused cooking. Can you tell me more about some the unique cannabis dishes you create? 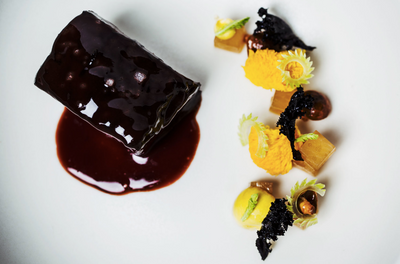 You start most, if not all, of your cannabis dishes with ice water hash, yeah? Is there a reason you prefer products made with that particular extraction method over regular flower, distillites, or other concentrates?

I don't like to use flower because there is a ton of excess plant material that will impart a very strong flavor into the food that I don't want there. I like to use concentrates, and I like to use a concentrate that is single origin, strain-specific, outdoor grown, and clean. Ice water hash and rosin I feel is the best expression of the plant we can find and it's as clean as we can get. I don't like to use CO2, butane, or distillate extracts because the flavor and the high just isn't as good, straight up. I want people to taste the cannabis in conjunction with the food and enjoy what they are tasting. Ice water hash and rosin just work the best for that.

I’ve heard that the Opulent Chef dining events are 100% alcohol free, why is that?

My events aren't completely 100% alcohol free, but it is definitely encouraged that guests don't consume alcohol. A couple of different reasons. First, alcohol and cannabis don't mix well a lot of the time. We have a lot of inexperienced guests that can potentially get too inebriated as cannabis will enhance the alcohol. Second, a lot of my dinners do not have cannabis infused directly into the food itself, but rather they are hash and rosin dab pairings with various food courses. These events are to show guests that we can have a fine dining experience with cannabis taking the place of wine, and that cannabis gives us an enjoyable cerebral experience while dining; we no longer need to rely on wine for that anymore.

420
RECIPE
FOOD
ENTERTAINMENT
MORE...
Zach Harris
FOLLOW
Zach Harris is a writer based in Philadelphia whose work has appeared on Noisey, First We Feast, and Jenkem Magazine. You can find him on Twitter @10000youtubes complaining about NBA referees.
Share this article with your friends!
AD
By using our site you agree to our use of cookies to deliver a better experience.
Accept
Decline
MORE FROM MERRY JANE