CULTURE
Adventures with Santa and Snoop
AD
Santa touches down in Los Angeles to share some dank knowledge with the Dogg
Published on December 23, 2021

Santa steered the sled south, across the Los Angeles sky, over Burbank, Glendale, and Pasadena along the foothills of Angeles National Forest.

“Steady as we go, Rudolph,” he called to the leader of the pack. “Santa needs to sit this thing down and find some relief.”

Santa’s little bottle of tincture Mrs. Clause made him at the North Pole was getting low and his vape pen had run out hours ago.

“You know I love this work, but my lower back has gotten the brunt of this delivery tonight,” he lamented, taking the dropper out of the bottle and shaking the last drops on his tongue.

Hovering over the town of Diamond Bar, Santa focused in on a basketball court of a very large house in what appeared to be a gated community.

As Santa gently slowed and landed on the court a man came out of the house wearing his pajamas and a Santa hat. He looked up at Santa and his crew, then down at the fatty burning in his hand.

“What the hell?” Snoop Dogg said, as he rubbed his eyes in disbelief. Wondering if the guy who rolls his joints slipped in a little something else. 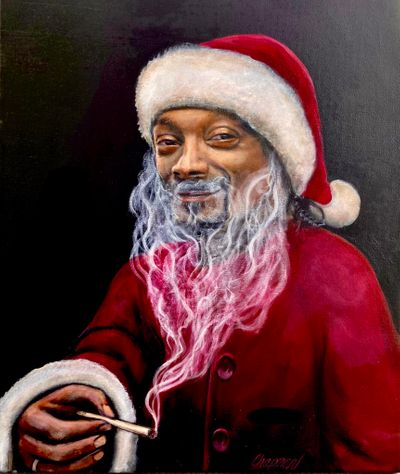 “Well, look who it is!” Santa exclaimed. “Mr. Dogg, of all people. What are the odds? Very pleased to meet you! The elves listen to your music at the North Pole.

Gathering his composure, Snoop gave into the seeming hallucination.

“Yo, Santa - call me Snoop. Is this really happening?” he asked.

“Sorry to surprise you, I tend to do that,” Santa replied with a big smile, attempting to reassure the stunned rapper.

“Thought I had a little something extra in this thing,” Snoop continued, offering up his fatty for Santa to partake. “The more medicated, the more dedicated, Santa.”

“This is a special occasion,” Snoop said, making a gesture for Santa to hang on to it. Lighting up another.

The two men stood there, looking over the neighborhood at the twinkling lights, partaking individually, but together. Enjoying the moment.

“I gathered that,” Santa said, with a wink. “The thing is - and I hate to lecture, but, your endocannabinoid system doesn’t really give a shit that you just want to get high. With due respect.”

“Like friends with benefits,” Snoop said, smiling broadly. “Hey, I know it’s good for me. But, I really do like to get high. All I know is, weed makes me feel the way I need to feel.”

“Yes, indeed,” Santa said. “Even though it's just one night a year, these long rides have really done a number on my back. Ever since we started growing up at the Pole, Mrs. Claus’ tinctures have saved me. The plant does help you feel the way you need to feel! Well said.”

“You grow weed at the North Pole?” Snoop asked, not believing what he was hearing.

“Well, the elves, it’s the elves, really,” Santa continued. “Someone brought home a clone and the rest is history, as they say. We just enjoy the gleaning. You know, many of the children I deliver to have been helped by this plant. It’s a shame some of the grown-ups don’t get it.”

“Yeah, the grown-ups,” Snoop laughed along with Santa. “Some people I smoke with talk too mutherfuckin’ much — they just get in the way. I’m digging the vibe with you, Santa. Glad you stopped by. You shook the shit out of me, but happy to know you.”

Snoop went inside the house and brought back a joint rolled into a cross, handing it to Santa.

“Well, look at that!” Santa exclaimed. “We know it’s God’s plant, so this is fine. Just fine. Thanks so much.”

“Seth Rogan rolled that one for me - you know, Seth?” Snoop asked, wondering how many celebs Santa has hung with on Christmas Eve.

“Why, yes, the actor - not personally, but I did enjoy that movie, Paul. Jolly good romp, that was! ET will never be the same in my mind. I’ll enjoy this one on the ride for quite a while,” he laughed. 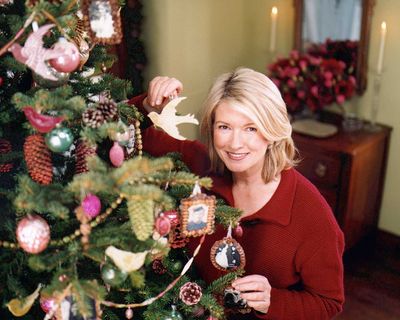 But, who I really want to ask you about is Martha Stewart,” Santa said in earnest. “What’s she really like?”

“I love me some Martha,” Snoop said. “She gets that contact high, you know? Martha likes to work out in the garden, but I’m on the other side of that, you dig?”

“I dig,” Santa laughed, getting back into the shining red and brass sled, commanding the reindeer to fly, “Here we go, Rudolph. On Dancer, Prancer, Vixen, Comet, Cupid, Donner, and Blitzen!”

“Damn, Santa, that is some nice ride,” Snoop said. “Where can I get one of those?”

“If the ride is fly, then you must buy!” Santa laughed, quoting Snoop himself. “But, you can’t, this is a one-off” he yelled out, with Snoop Dogg watching in amazement as Santa and crew lifted the sled off the court and into the night sky.

“Merry Christmas to all, and to all a dank night,” Santa hollered to Snoop. “Until next year!”

Author’s Note: This series has been published around the world for nine years, with Santa landing in a different region each year. To read the full series, visit www.sharonletts.com/features/adventureswithsantaclaus

CULTURE
SNOOP DOGG
POP CULTURE
CHRISTMAS
MORE...
Sharon Letts
FOLLOW
“I identified as a stoner from the 70s for decades, until I presented with cancer in my 50s; now I’m an Educated Stoner.” – Sharon Letts
Share this article with your friends!
AD
By using our site you agree to our use of cookies to deliver a better experience.
Accept
Decline
MORE FROM MERRY JANE