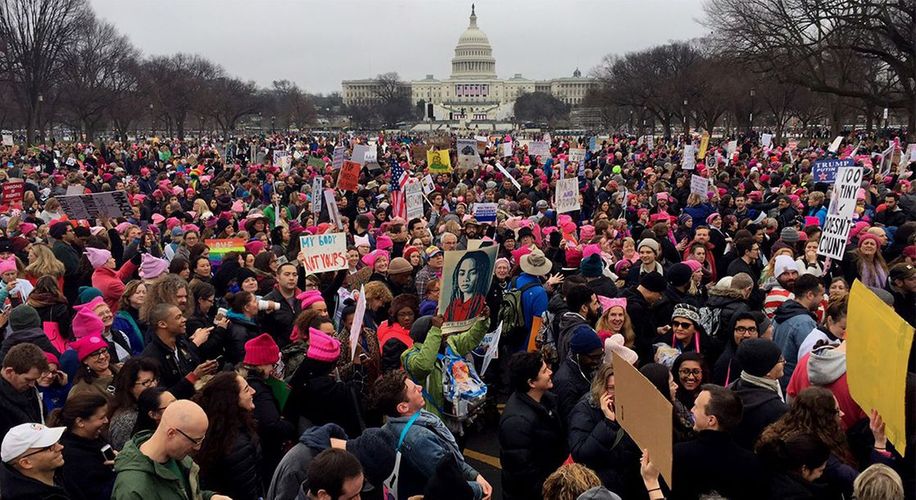 An estimated 4,814,000 people attended 673 anti-Trump and pro-women rallies around the globe.

An estimated 4,814,000 people attended 673 anti-Trump and pro-women rallies around the globe.

When Donald Trump took the stage for his address at his presidential inauguration last Friday, he did so to underwhelming crowds that paled in size compared to the ones that amassed for Obama’s inaugurations. However, that following day, the country's new leader caused a record-breaking number of dissenters to hit the streets and protest against him and for women’s rights.

In the nation’s capital alone, an estimated 500,000 people showed up to demonstrate against the incoming administration, about three times the size of Trump’s inauguration audience. While Washington, D.C. may have served as the main hub for the women’s march, there were a reported 673 related events held elsewhere in the United States and throughout the world.

Here are some official estimates of the turnout in other US cities:

Although the demonstration was prompted by the US presidential election results, the women’s march proved that this fight stretches way beyond the country’s borders. London saw an estimated 100,000 marchers, while other cities outside the United States, like Toronto, Canada and Sydney, Australia saw tens of thousands of protestors taking the streets as well.

Altogether, around 4,814,000 participants took part in the 673 demonstrations hosted around the world.

The protests drew an interesting (we wish we could say unexpected, but that is sadly no longer the case anymore) response from Trump and his team. In the administration’s first official press briefing, the president’s press secretary Sean Spicer falsely stated that last weekend’s inauguration had the largest audience ever, “Period.” Not only did crowd size experts refute this as a baseless claim, simple photo comparisons of Barack Obama’s inauguration in 2009 and 2013 with Trump’s clearly paint a different picture.

Unsurprisingly, Trump turned to Twitter to voice his opinion on the massive global protests against him and his administration. The newly inaugurated president showed conflicting feelings, claiming that he recognizes the right to protest, while also chiding the demonstrators for allegedly failing to vote against him (even though he lost the popular by an estimate of 3 million votes).

Watched protests yesterday but was under the impression that we just had an election! Why didn't these people vote? Celebs hurt cause badly.

Peaceful protests are a hallmark of our democracy. Even if I don't always agree, I recognize the rights of people to express their views.

While the millions of people who joined the women’s march gives us hope in these bleak times, the response from the Trump team is extremely concerning. Most rational human beings would call Spicer’s misinformation a blatant lie, but Trump’s closest advisor Kellyanne Conway unbelievably labeled the press secretary’s false statement as “alternative facts.”

Greatly exaggerating the number of people present at the inaugural address might not seem like something that important in the grand scheme of things, but it sets a precedent that the Trump administration is only interested in telling you the truth if it fits in their “populist” narrative. But, as long as the millions of protestors who marched against Trump remain vigilant and active, the president will have a tough time writing his own history.