NEWS
Weekly Weed News Roundup: Virgin Islands Legalizes MMJ, Cali Cops Are Busting Drivers for Bud
AD
The fight for cannabis reform is spreading to some of the largest — and smallest — corners of the nation.
Published on January 22, 2019

This week, the fight for cannabis reform is spreading to some of the largest — and smallest — corners of the nation. Last Tuesday, New York Governor Andrew Cuomo unveiled his plans to bring a fully taxed and regulated adult-use cannabis market to the Empire State. On the very same day, the U.S. Virgin Islands' new governor signed a bill to legalize medical marijuana in the territory. Meanwhile, on Capitol Hill, Trump's new pick for U.S. Attorney General has promised not to interfere with state-legal cannabis operations.

And in California, recreational cannabis has been legal for just over a year now, but officials are still working to iron out the fine details of the regulations governing retail sales. Last week, officials clarified that it is legal to deliver pot to any adult in the state, even if said adult lives in a town that has “opted out” of allowing weed businesses on their turf. Yet despite the legality of these deliveries, the amount of weed seized by the California Highway Patrol has been on the rise over the past year, and even fully-legal pot transportation businesses have had their cash seized and turned over to federal authorities. Let’s dive into the Week in Weed News. 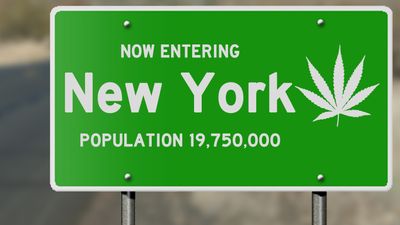 New York Governor Andrew Cuomo just unveiled his proposal for the state's fiscal year 2020 budget — and along with it, his plans to finally bring legal weed sales to the Empire State. The proposed Cannabis Regulation and Taxation Act would make it legal for adults over 21 to buy and possess weed, but unlike most other canna-legal states, would prohibit home grows. “Let’s stop the disproportionate impact on communities of color,” Cuomo said, according to Rolling Stone. “Let’s create an industry that empowers the poor communities that paid the price and not the rich corporations that come in to make a profit.”

To this end, the proposed bill would create an Office of Cannabis Management, which would not only oversee the regulations and licensing of legal sales, but also would be tasked with clearing the records of former cannabis offenders. This new agency would also be required to prioritize applications from businesses run by minorities, women, or struggling farmers. "We have to do it in a way that creates an economic opportunity for poor communities and people who paid the price and not for rich corporations who are going to come in to make a buck," Cuomo reiterated, according to the Democrat & Chronicle.

Another thing that makes Cuomo's plan unique is that it would not impose a retail tax on weed sales. Instead, the state would impose a 20 percent state tax and a 2 percent local tax on sales between wholesalers and retailers, as well as a per-gram tax on cultivators. The proposal is far from a done deal, though, as the bill must still be approved by state legislators before it can return to the governor's desk for final approval. The state is hoping that the bill will be passed alongside the state budget bill by April 1st of this year, but legal sales would not be allowed to begin until April 1st of 2020 at the earliest.

While the majority of New Yorkers are undoubtedly psyched about the news from Governor Cuomo, there are still some notable naysayers. This week, former New York City Mayor and 2020 presidential hopeful Michael Bloomberg said that ending prohibition “doesn't make any sense at all,” Maclean's reports. “To go and encourage people, to make it easier for people to engage in a behavior that has a significant possibility of damaging people’s health is just nonsensical. This mad, passionate rush to let everybody do things without any research just isn’t something we would do in any other way.”

“Bloomberg is out of his element and has no credibility on this issue due to his track record of ruining lives,” NORML political director Justin Strekal said to Marijuana Moment, referencing the former mayor's support of aggressive policing tactics like “stop-and-frisk,” which led to a disproportionate number of minorities being arrested for minor pot crimes. 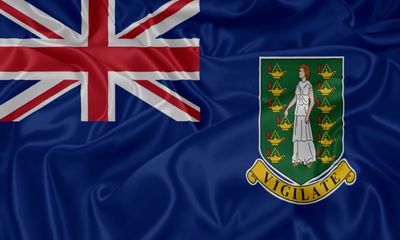 While New York and many neighboring states roll out their plans for legal weed, some of the tiniest islands under U.S. jurisdiction are also beginning to see green. Medical marijuana has been legal in Guam and Puerto Rico for several years now, and last September, the Commonwealth of the Mariana Islands legalized both recreational and medical marijuana in one fell swoop. Now, the Virgin Islands has joined its fellow U.S. territories in saying yes to legalization.

Last Tuesday, newly-elected Governor Albert Bryan Jr. signed the Virgin Islands Medical Cannabis Patient Care Act — a new law that will allow patients suffering from almost twenty different qualifying conditions to legally possess up to four ounces of cannabis flower. Qualifying patients will also be allowed to grow up to 12 cannabis plants for their own personal medical use. “I believe a properly regulated medicinal cannabis industry can provide relief to those seeking alternatives to conventional medicine and can also be an economic driver attracting new revenues for the Virgin Islands,” Bryan said, according to Leafly.

Back in 2014, a majority of Virgin Islands voters approved a non-binding referendum signaling their support for legalization. Later that year, and every year following, territory Senator Positive T.A. Nelson proposed bills to make these voters' wishes a reality. Each year, the bills were shot down, but Nelson persevered, and the territory’s Legislature finally approved medical marijuana legalization last December. Now that Gov. Bryan has signed the bill into law, Nelson said that he is “ready to assist with the establishment of rules and regulations, which will be the next step,” Marijuana Moment reports. “However, each jurisdiction cannot be satisfied with our own success in getting local law changed, but must continue the charge until there are changes to federal government law.”

Back in November, the cannabis sector celebrated the forced resignation of Attorney General Jeff Sessions, one of the most vehement prohibitionists the country has seen in recent history. William Barr, Trump's pick to replace Sessions, does not seem to represent much of a change in the status quo, however. Barr previously served as Attorney General under President George H. W. Bush, where he was responsible for enacting “tough-on crime” policies that led to a vast increase in the country's prison population during the 1990s.

Although Democrats are understandably concerned about Barr's track record regarding mass incarceration, one positive thing emerged during his confirmation testimony — the candidate stated that he didn't want to “upset settled expectations” by cracking down on state-legal pot businesses. “To the extent that people are complying with the state laws, distribution, and production and so forth, we’re not going to go after that,” he added, according to the Associated Press. Regardless, Barr is no friend of legalization: he also mentioned that he would support a federal law that “prohibits marijuana everywhere.”

“It is encouraging that William Barr pledged not to enforce federal marijuana prohibition against the majority of US states that have reformed their laws. With this commitment, Congress has a clear mandate to take action and end the underlying policy of federal criminalization,” NORML Political Director Justin Strekal said in a statement. “In an era when 47 states have laws on the books that defy the Schedule I status of cannabis, it makes no sense from a political, fiscal, or cultural perspective to try to put this genie back in the bottle.” 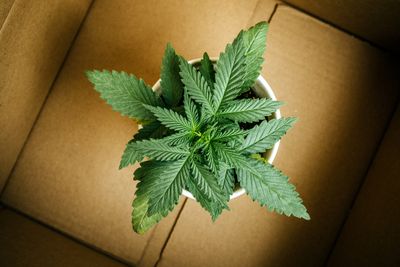 Like many states that have legalized adult-use cannabis, California allows individual municipalities to “opt out” of the legal pot industry by banning all weed businesses from their jurisdictions. A surprising number of Golden State towns and cities have chosen to do just that, putting residents living in over a third of the state at least 60 miles away from a legal pot store. Fortunately for stoners living in these so-called “pot deserts,” the state Bureau of Cannabis Control (BCC) has recently clarified a regulation ensuring that weed can be legally delivered to towns that opted out.

Despite opposition from state police, California has decided to uphold a previous regulation allowing weed to be delivered anywhere in the Golden State. “The public spoke loud and clear in favor of statewide delivery,” BCC spokesman Alex Traverso said in a statement. The rule had already been in effect under the state's temporary regulations, but the final regulations — which were approved last Wednesday — make the rule law. “At this point, you cannot stop regulated delivery services from entering a banned area to deliver to a consumer legally,” Josh Drayton of the California Cannabis Industry Association told the Associated Press.

California Cops Have Been Seizing Record Amounts of Weed From Drivers

Even though California has officially greenlighted weed deliveries, delivery drivers may still find themselves running afoul of state police. Between January and November of last year, the California Highway Patrol (CHP) seized eight tons of weed — double the amount seized in all of 2017, and more than any year since 2014. A CHP spokesperson said that police are working to crack down on unlicensed black market operations, but some legally-licensed pot transporters have also found themselves on the wrong side of the law.

Last September, CHP officers arrested Rick Barry and Brian Clemann for transporting a $257,000 cash payment for medical cannabis oil. The two men, who are former CHP officers themselves, run a fully-licensed cannabis transportation business, and maintain that all aspects of their transaction were entirely legal under state law. Police released the men shortly after the arrest, but seized their cash and turned it over to the Department of Homeland Security.

Barry and Clemann are now suing the CHP over the arrest. “It appears the CHP will stop at nothing to disrupt the lawful and legal transport of items involved in the medicinal cannabis industry,” the men said in a press release, the Sacramento Bee reports. Police initially claimed they arrested the men for possessing cash relating to the unlawful possession of a controlled substance, but no charges have been officially filed against them.

“The fundamental issue here is whether the CHP is going to follow the will of the voters of California and the Legislature and stop cooperating with federal authorities in the ongoing federally instigated war on cannabis,” the plaintiffs’ attorney, Matt Kumin, told the Bee. The lawsuit asks for an injunction that will prohibit CHP “from turning over any assets seized from lawfully operating California cannabis businesses to any federal agency,” Marijuana Business Daily reports. Kumin believes that the court may rule on this issue as soon as next month.

NEWS
420
MEDICAL MARIJUANA
POLICE
MORE...
Chris Moore
FOLLOW
Chris Moore is a New York-based writer who has written for Mass Appeal while also mixing records and producing electronic music.
Share this article with your friends!
AD
By using our site you agree to our use of cookies to deliver a better experience.
Accept
Decline
MORE FROM MERRY JANE