NEWS
Weekly Weed News Roundup: NYC Cracks Down on CBD; Barneys Embraces Bud
AD
In other news, a fresh study has found that medical marijuana could help slow the growth of colon cancer, and Hawaii and New Mexico both move one step closer to legalization.
Published on February 12, 2019

The federal push for nationwide cannabis reform seems to have stalled for the moment, but state lawmakers all across the country are fighting to bring the green rush to their home turfs. Last week, key legislative committees in Hawaii and New Mexico advanced bills to legalize full adult-use cannabis. Meanwhile in Maryland, legislators introduced their own legalization bill, despite Governor Larry Hogan’s lukewarm support.

New York is also working on its legalization bill, but even as the state prepares to go green, New York City is finding new ways to crack down on cannabis. The Big Apple’s health department just banned all CBD-infused foods and drinks, and nearby states are following suit. In other news, a new research study has found that medical marijuana could help slow the growth of colon cancer, and Barneys is planning to bring an upscale pot shop to Beverly Hills. Let’s dig into the week in weed news. 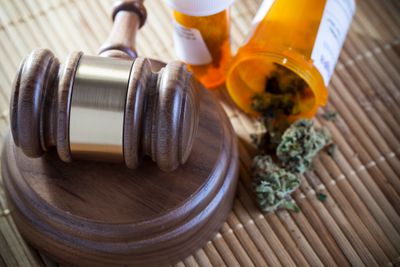 Hawaii and New Mexico Move One Step Closer to Legalization

Dozens of states across the country are jockeying for the chance to become the 11th U.S. state to legalize recreational cannabis, and Hawaii and New Mexico have just moved closer to the top of the list.

Last Thursday, a key Hawaii Senate committee unanimously approved a bill that would legalize pakalolo – the local slang for weed – for adults 21 and over. The bill would also allow adults to grow their own weed and possess up to half an ounce, and would create a licensed and regulated retail market, with sales taxed at 15%. Sales would not be allowed to begin until February 2021, however.

The bill must still be approved by another committee before it comes up for a floor vote, but insiders are optimistic that the bill will clear both the committee and the full Senate – especially considering the fact that twelve out of the 25 total state senators are co-sponsoring the new legislation. “Legalization is inevitable,” state Rep. Chris Lee, who introduced an almost identical bill in the state House, told Honolulu Civil Beat. “The question is, how much and how quickly.”

Despite the bill's strong support among local lawmakers, other government officials are more hesitant. Governor David Ige recently said that he was “concerned about conflicting federal and state laws that allow marijuana dispensaries on each island, but prohibit the transport of marijuana between islands,” Civil Beat reports. The state Department of Transportation has also raised concerns that legal weed will increase pot-related traffic accidents. State Sen. Will Espero believes that the state's greatest concern is “our need for revenues,” however, and noted that legal pot tax revenue could allow the state to avoid raising taxes.

Not to be outdone, New Mexico legislators have also advanced their own legalization bill. Last Saturday, a state House committee voted 5-2 to advance a bill that would allow adults over 21 to possess up to two ounces of flower and 16 grams of extracts. What's more, the bill would create a fully regulated retail market and allow former pot offenders to clear their criminal records. The state's Legislative Finance Committee has estimated that the proposed pot sales tax of 9% could bring the state nearly $34 million a year by 2023, and local municipalities would be able to tack on an additional 3%, which could net them $22 million annually.

The bill must still pass the House Judiciary Committee before it moves to the floor, but House Speaker Brian Egolf believes that the bill will “probably pass the House,” Marijuana Moment reports. The state Senate has been traditionally less open to legal weed, but new Governor Michelle Lujan Grisham, who campaigned on a pro-legalization platform last year, is almost certain to sign the bill if it crosses her desk. 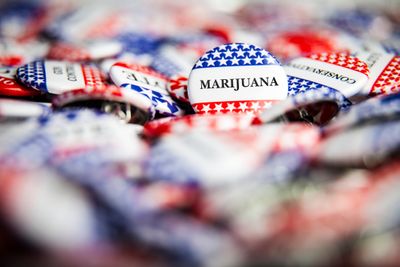 Just one week after Baltimore's top prosecutor announced that her office would stop prosecuting pot possession cases, a Maryland state legislator filed a bill that would end prohibition in the Old Line State. The bill would allow adults to grow up to four plants each and to possess up to an ounce of flower and five grams of concentrates. The bill would create a regulated retail market, taxing sales at the relatively low rate of 6%. This tax revenue would be used to fund substance abuse treatment, expungement of former cannabis crimes, prevention of stoned driving, education, and investments in communities ravaged by the War on Drugs.

State House Speaker Michael Busch confirmed that he expects lawmakers to broach the topic of legal weed this year. "Whether you support it or whether you don't support it, personally, I think that's the future," Busch said, according to the Associated Press. "I think you're going to see the country go to legalizing recreational marijuana and, you know, it'll be much like overturning prohibition." State Senate President Thomas Miller Jr. is also on board, having announced his support for “the legalization and taxation of marijuana, with restrictions” way back in 2014, Marijuana Moment reports.

Last year, Gov. Larry Hogan said that he thought legalization was “worth taking a look at,” but more recently he has stated that passing a legalization bill this year would be “premature.” The governor added that the state should first sort out its medical marijuana program, which was delayed for years over a wide range of issues, including lawsuits over racial inequality and constant staff turnover. Even if this bill does not succeed, lawmakers have filed another bill that would place a legalization question on next year's election ballot, allowing Maryland voters to decide for themselves whether pot should remain illegal. 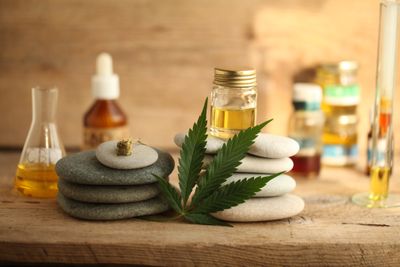 At the end of last year, President Trump signed the 2018 Farm Bill into law, legalizing hemp and all hemp-derived products – including CBD. Seemingly within days, an explosion of CBD-infused edibles, drinks, oils, and lotions began to appear in every corner of New York City, from the smallest bodega to the poshest restaurant. But while CBD is legal in its pure form, the Food and Drug Administration still prohibits manufacturers from adding it to food or drink – and NYC officials are now moving to enforce these rules locally.

Last week, the city Department of Health and Mental Hygiene began confiscating CBD-infused drinks and foods from local restaurants and cafes. “Restaurants in New York City are not permitted to add anything to food or drink that is not approved as safe to eat,” the agency said in a statement, Eater reports. “The Health Department takes seriously its responsibility to protect New Yorkers’ health. Until cannabidiol (CBD) is deemed safe as a food additive, the Department is ordering restaurants not to offer products containing CBD.”

The health department's decision may have serious ramifications for restaurants who have come to depend on the brisk sales of these new infused products. C.J. Holm, owner of Fat Cat Kitchen — an East Village cafe that was one of the first establishments raided by the health department — told the New York Times that her “CBD stuff is absolutely the No. 1-selling revenue source in the store.” So far, 11 restaurants have specifically been ordered to stop adding CBD to food.

New York is not alone in its decision to crack down on CBD. Last week, Ohio officials began an “embargo” of any and all products containing CBD, and in Maine, where cannabis is completely legal, the state health department has also ordered local businesses to remove CBD edibles from their shelves. 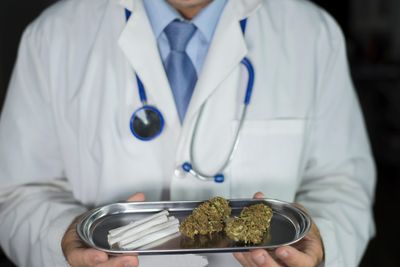 Researchers seem to be finding novel medical uses for CBD every day, but new studies are suggesting that other cannabinoids may also have powerful medical uses, including the ability to fight cancer. Fresh research published in the Cannabis and Cannabinoid Research journal has found that ten different cannabinoids have the potential to inhibit the growth of colorectal cancer cells. Researchers from the Penn State College of Medicine incubated seven different kinds of cancer cells in test tubes and then tested the effects of various marijuana compounds on these cells.

Surprisingly, the researchers found that the most commonly-known cannabinoids – THC and CBD – had no effect on the cells. However, researchers successfully identified ten other cannabinoids that slowed the growth of almost all seven kinds of colon cancer cells. Medical professionals have long known that two different cannabinoid receptors in the body are involved in colorectal cancer, but this is one of the first studies showing that medical marijuana could be used to treat these forms of cancer.

“Now that we've identified the compounds that we think have this activity, we can take these compounds and start trying to alter them to make them more potent against cancer cells,” Penn State pharmacology department chair and study co-author Dr. Kent Vrana told the Daily Mail. “And then eventually, we can explore the potential for using these compounds to develop drugs for treating cancer.”

As the explosion of legal weed grows ever more popular, a growing number of well-established businesses have been brainstorming ways to cash in on this massive new trend. This week, luxury department store chain Barneys announced its plans to get in on the weed game by opening an upscale pot pop-up in its Beverly Hills flagship store. The space, aptly titled The High End, will sell deluxe paraphernalia, as well as select cannabis products from Beboe.

As signaled by the name, The High End's products cater to cannabis consumers willing to drop dough. The store plans to offer gold rolling papers, hand-blown water pipes, designer horn lighters, and even a $1,475 sterling silver weed grinder. “It’s made for people like me: high-functioning adults who maybe use cannabis once or twice a week,” Scott Campbell, celebrity tattoo artist and co-founder of Beboe, told the New York Times. “I’ve got kids to raise, careers to maintain, and when I do have time to enjoy weed, I don’t care how much it costs. I just want the best possible experience.”

"Many of our customers have made cannabis a part of their lifestyle, and The High End caters to their needs with extraordinary products and service they experience in every facet of Barneys New York," CEO Daniella Vitale said in a statement, Investor's Business Daily reports. Barneys is planning to bring The High End to its other California stores in the near future, and hopes to bring the new venture to New York as soon as the state legalizes recreational cannabis.

NEWS
POLITICS
LEGALIZATION
HEALTH
MORE...
IN THIS STORY
CBD
Click to shop at our CBD store
Chris Moore
FOLLOW
Chris Moore is a New York-based writer who has written for Mass Appeal while also mixing records and producing electronic music.
Share this article with your friends!
AD
By using our site you agree to our use of cookies to deliver a better experience.
Accept
Decline
MORE FROM MERRY JANE