NEWS
Weed Used to Grow Wild in NYC Until Cops Eradicated It in the ‘50s
AD
Until the 1950s, it was common to see hemp and weed plants “the size of Christmas trees” growing wild in abandoned lots and yards throughout New York.
Published on October 28, 2019

Image via the Brooklyn Public Library

Despite New York City's reputation as one of the most liberal cities in the US, it continues to uphold archaic cannabis prohibition laws, despite the fact that neighboring states have embraced legalization. By the early 2010s, NYPD made more weed arrests than anywhere else in the world. Last year, police data revealed that 94 percent of all New Yorkers arrested for weed were people of color.

New York City was not always so averse to weed, however. Before the 1950s, cannabis plants actually grew wild all across the five boroughs. Whole fields of 10-foot-tall hemp and marijuana plants could often be seen growing in empty lots and underpasses. This wild weed was eventually eradicated after public opinion turned against cannabis in the ‘20s, which was fueled by racist Reefer Madness myths started by asshole supreme: Henry Anslinger. 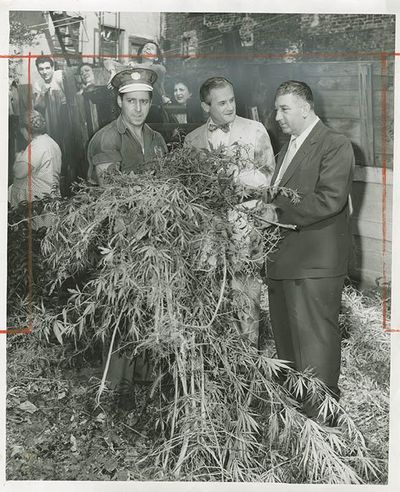 One of the first mentions of cannabis in a local newspaper occurred on (believe it or not) April 20, 1924 in the Brooklyn Daily Eagle. This article details how “loco weed” from Mexico was being shipped to the US “for sale to addicts of the plant.” The article acknowledged that weed can produce a feeling of “exhilaration or grandeur,” but also claimed that “instances have been known where crazed addicts have committed murder.”

The United States officially criminalized cannabis in 1937, but feral weed continued to grow wild in NYC until the 1950s. In the summer of 1951, John E. Gleason, head of the NYC Sanitation Department created the “White Wing Squad,” a team of sanitation workers tasked with eradicating the city's naturally occurring weed. Over the course of that summer, the White Wings uprooted and destroyed around 41,000 pounds of pot — 17,200 pounds of which came from Brooklyn alone. 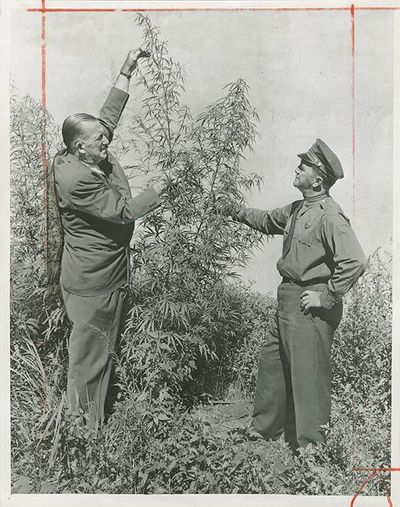 Most of these cannabis fields were purely feral. But the White Wings also cracked down on intentional weed grow-ops, seizing “millions of dollars” worth of black market pot from “marijuana plantations” in Brooklyn, the Brooklyn Public Library reports. In July of 1951, cops raided a weed farm being grown in a vacant lot that was being developed into the Brooklyn Civic Center. In total, the Sanitation Department claimed they destroyed $6 million worth of weed that summer.

In September of 1951, the White Wings discovered Brooklyn's “biggest crop yet” growing in Coney Island. In a subsequent interview, Gleason told the Brooklyn Daily Eagle that some of these plants, which were “apparently cultivated,” were the “size of Christmas trees.” Throughout the rest of the ‘50s, the Sanitation Department continued to seek and destroy New York's wild weed. Then, this responsibility shifted to the NYPD in the ‘60s.

Even today, wild cannabis can occasionally be found growing in New York. In 2010, a keen observer spotted a young pot plant sprouting out of a fence in the East Village. That same year, other wild-growing plants were spotted in Union Square and Brooklyn. It was never discovered whether these plants were grown intentionally, or were leftovers from a time when weed used to grow naturally in the city streets.

HEMP
HISTORY
CULTURE
NEW YORK
MORE...
Chris Moore
FOLLOW
Chris Moore is a New York-based writer who has written for Mass Appeal while also mixing records and producing electronic music.
Share this article with your friends!
AD
By using our site you agree to our use of cookies to deliver a better experience.
Accept
Decline
MORE FROM MERRY JANE