NEWS
Washington DC Will Officially Vote on Decriminalizing Natural Psychedelics This November
AD
Another campaign to decriminalize natural psychedelics has overcome the odds and qualified for the election ballot, despite the pandemic.
Published on August 6, 2020

This November, the nation's capital will vote on decriminalizing the possession and use of natural psychedelics like psilocybin, ayahuasca, and mescaline-containing cacti.

The ballot measure, officially known as Initiative 81 or the “Entheogenic Plant and Fungus Policy Act of 2020,” would direct city cops to regard plant-based psychedelics as their lowest law enforcement priority. The measure does not legalize these natural medicines, but would potentially allow DC residents aged 21 or older to grow and use shrooms in the privacy of their homes without fear of being sent to prison.

The advocacy group asked elections officials to grant them the right to collect signatures electronically, but this request was denied. Failing this, the campaign devised a new plan allowing them to continue on a much smaller scale. Activists mailed 10,000 petitions to individual supporters, who circulated them among their families and close friends and returned them by mail. 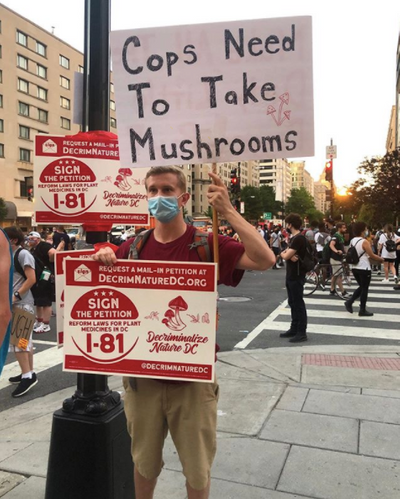 All of the extra effort paid off in the end, and DNDC was able to submit around 35,000 signatures by the deadline. At a virtual meeting this week, the Board of Elections announced that they had successfully verified 25,477 of these signatures – just narrowly exceeding the 24,385 registered voters needed to qualify for this year's ballot.

“Despite the challenges of the pandemic, our campaign saw strong support from DC voters for Initiative 81 from all eight wards,” DNDC chairperson Melissa Lavasani said in a press release, according to Marijuana Moment. “Every District voter who signed the petition to put the initiative on the ballot helped give DC residents this historic opportunity to change outdated laws that criminalize people who use natural substances to overcome anxiety, depression, PTSD, and other conditions.”

“We are excited to continue educating voters ahead of the election,” Lavasani added. “Although the pandemic is an added challenge, I am confident that Initiative 81 will pass on November 3 and that DC will take this important step towards ending another part of the destructive and wasteful war on drugs.”

Early polls suggest that the measure might pass with a narrow margin. A February poll found that 51 percent of voters supported the initiative, but after hearing a list of pros and cons regarding the proposal, support increased to 59 percent. DNDC will continue to educate voters about the benefits of natural psychedelics as the election nears.

And this week, Canadian health officials granted four terminally ill patients the right to use natural psychedelics during their end-of-life care. This is only a small step compared to America's larger push for reform, but is indicative of a growing tide of support for psychedelic-assisted therapy.

WAR ON DRUGS
PSYCHEDELICS
MEDICINAL PSYCHEDELICS
AYAHUASCA
MORE...
Chris Moore
FOLLOW
Chris Moore is a New York-based writer who has written for Mass Appeal while also mixing records and producing electronic music.
Share this article with your friends!
AD
By using our site you agree to our use of cookies to deliver a better experience.
Accept
Decline
MORE FROM MERRY JANE