NEWS
Vast Majority of Americans Are Not Bothered by Public Weed Vaping, New Study Says
AD
As vape cartridge sales skyrocket in legal weed markets across the U.S., a new survey suggests that the cannabis consumption method is accepted by stoners and THC teetotalers alike.
Published on August 16, 2018

First reported by Westword, a new survey from rehabilitation website Detox.net questioned more than 1,000 American adults about their opinions on cannabis vaporizer use and found that while most people had noticed someone getting stoned in public, they were generally ambivalent towards the quickly dissipating clouds of chronic vapor.

As for admitted cannabis users, 94% said that they would not care if they saw someone vaping outside. Interestingly, 4% of self-described pot consumers said they would potentially alert cops if they saw public pen use. 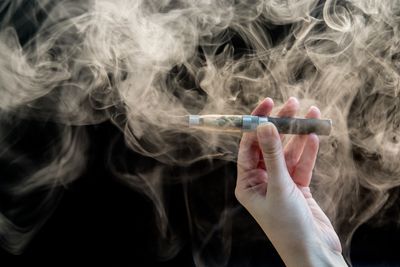 Looking at popular vaping locations, 67% of survey respondents said they had noticed someone getting stoned in a public park, with sidewalks and bar patios coming in at a close second and third, respectively. But while only 25-30% of respondents said that seeing someone vape in those locations bothered them, enclosed spaces drew significantly more annoyance, with more than 80% of Americans saying that it is unacceptable to break out the BHO or distillate on subways and buses, or inside restaurants and public restrooms.

Even in the most liberal states with legal weed, cannabis use of any kind is currently banned in all public spaces. Still, with most legalization laws requiring approval from building or home owners before cannabis consumption is allowed anywhere inside, renters and tourists from California to Washington D.C. have been made to move outdoors if they want to light up. For those marijuana users stuck between a rock and a hard place, vaporizers have offered an unobtrusive way to access the plant and its many benefits without pissing off neighbors.

So next time you’re looking over your shoulder for snitches while pulling on that Pax, take a deep breath, inhale a little deeper, and remember that even if someone does notice, the odds are pretty good that they don’t give a puff.

NEWS
420
LEGALIZATION
HEALTH
MORE...
Zach Harris
FOLLOW
Zach Harris is a writer based in Philadelphia whose work has appeared on Noisey, First We Feast, and Jenkem Magazine. You can find him on Twitter @10000youtubes complaining about NBA referees.
Share this article with your friends!
AD
By using our site you agree to our use of cookies to deliver a better experience.
Accept
Decline
MORE FROM MERRY JANE