The products, four types of vape cartridges and disposable pens in varying sizes and strains, including GSC, King Louis XIII, Pineapple Express, and more, were produced and distributed by Greenfield Organix, sold across California from the Bay Area to Los Angeles.

"Batch Number B-180504 contains the pesticide Myclobutanil and does not comply with the Bureau of Cannabis Control (BCC) standards," a press release announcing the recall detailed. "We are working closely with the BCC to remedy this issue and expect clean, compliant products to be back on shelves in three weeks." 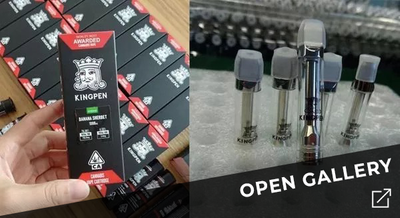 It is not yet clear how the contaminated cartridges made it past laboratory testing and on to dispensary shelves, but as California canna-businesses continue to jump through the hoops of Proposition 64's final compliance rules, Bloom is not the only company to fail the state's strict safety requirements. According to the Orange County Register, newly released BCC statistics report that 1 in every 5 pot samples tested by the state's licensed labs since July 1st has been red stamped.

Of those failed tests, 19% were accredited to residual pesticides like Myclobutanil, a fungicide commonly used in food production, but deemed unsafe when heated. Outside of chemical sprays and bug killers, 68% of the failed tests were rejected for false claims about THC and CBD levels. Whether a mistake or a marketing tool, California labs test weed for potency to both inform consumers and to verify cultivator claims. Making up the rest of the state's bad samples, 6% tested positive for mold or bacteria contamination, while another 5% were comprised of concentrates with high levels of residual solvents like butane or ethanol.

With thousands of fully permitted cultivators and only 31 licensed labs to test their product, the number of failed tests and rejected products could increase as state-approved white coats work through lengthy sample backlogs.

As for Bloom, state regulators are investigating the production, testing, and distribution processes that led up to the voluntary recall, with potential consequences for the vape company coming after that review.

"The Bureau is focused on public health and safety and is actively working with the California Department of Public Health and Bloom to ensure that all affected products are successfully recalled," BCC spokesman Alex Traverso told Marijuana Business Daily. "At the current time, we're looking into the events that led to the voluntary recall, and as such, there has been no determination regarding the status of Bloom's license."

LEGALIZATION
LEGISLATION
HEALTH
CALIFORNIA
MORE...
IN THIS STORY
CBD
Click to shop at our CBD store
Zach Harris
FOLLOW
Zach Harris is a writer based in Philadelphia whose work has appeared on Noisey, First We Feast, and Jenkem Magazine. You can find him on Twitter @10000youtubes complaining about NBA referees.
Share this article with your friends!
AD
By using our site you agree to our use of cookies to deliver a better experience.
Accept
Decline
MORE FROM MERRY JANE