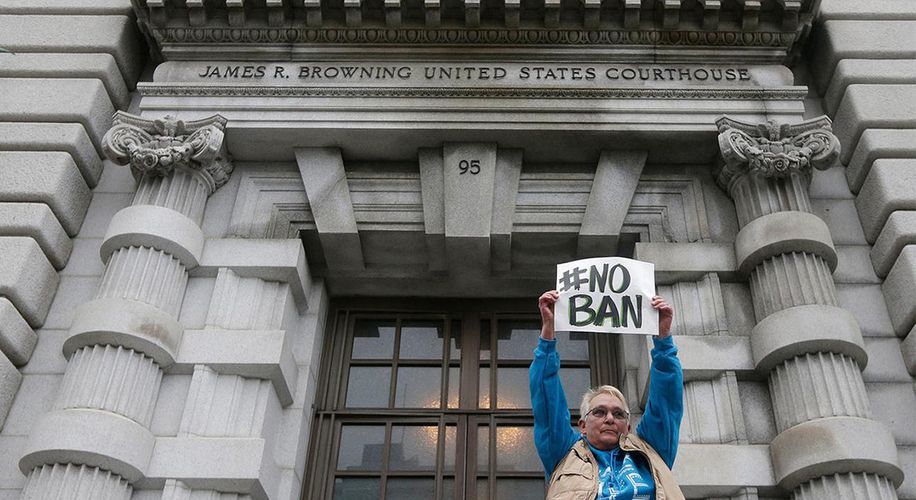 The three-judge panel voted unanimously to continue the suspension of the president’s immigration ban from seven Middle Eastern countries.

The three-judge panel voted unanimously to continue the suspension of the president’s immigration ban from seven Middle Eastern countries.

It’s been two weeks since President Trump signed an executive order banning immigration from Syria, Iran, Libya, Somalia, Yemen, Iraq, and Sudan, and the hastily written and arguably unconstitutional move is giving the president a much-needed lesson in the power of the independent judicial.

Ever since demonstrators immediately gathered at airports across the US to protest the ban, Trump’s attempted immigration freeze has all but completely unraveled, as the travel ban has experienced pushback from the judicial branch and over 100 tech companies. After the executive order was put on hold last week by federal district Judge James L. Robart of Seattle, the Trump administration brought their claim to the 9th U.S. Circuit Court of Appeals in San Francisco.

On Thursday, the three-judge panel declined to overturn Judge Robart’s initial ruling, delivering a heavy legal blow to Trump’s travel ban. The court argued that the administration failed to prove that any immigrants from the banned countries have perpetuated a terrorist attack in the United States. According to Carl Tobias, a law professor from the University of Richmond, the argument for reinstating the travel ban was unconvincing on virtually every issue.

"The order was unanimous. The panel found that the states had standing, that the executive order was reviewable by the court, that the U.S. was not likely to succeed on the merits and that it had not shown that a stay was necessary to avoid irreparable injury," Tobias said.

August Flentje, special counsel to the assistant attorney general, argued that the president has the lawful authority to protect the national security of the country, and thus the ban should not be reviewable in court. But the state of Washington argued that the order was a clear abuse of power by the executive branch, as the ban is discriminatory and violates both federal law as well as the constitutional protection from religious discrimination.

In typical Trump fashion, the president tweeted a seething rebuttal to the court’s decision, ultimately hinting that he would appeal the ruling yet again.

SEE YOU IN COURT, THE SECURITY OF OUR NATION IS AT STAKE!

In short, this means that the administration will likely take the appeal to the United States Supreme Court, which would likely determine the final outcome of the case. There are currently four liberal and four conservative justices sitting on the Supreme Court. Trump’s pick Neil Gorsuch awaits confirmation to become the ninth member, but is unlikely to receive congressional approval before the travel ban reaches the SCOTUS.

As of now, if the ruling ends in a 4-4 split, the decision made by the 9th U.S. Circuit Court of Appeals would be upheld.