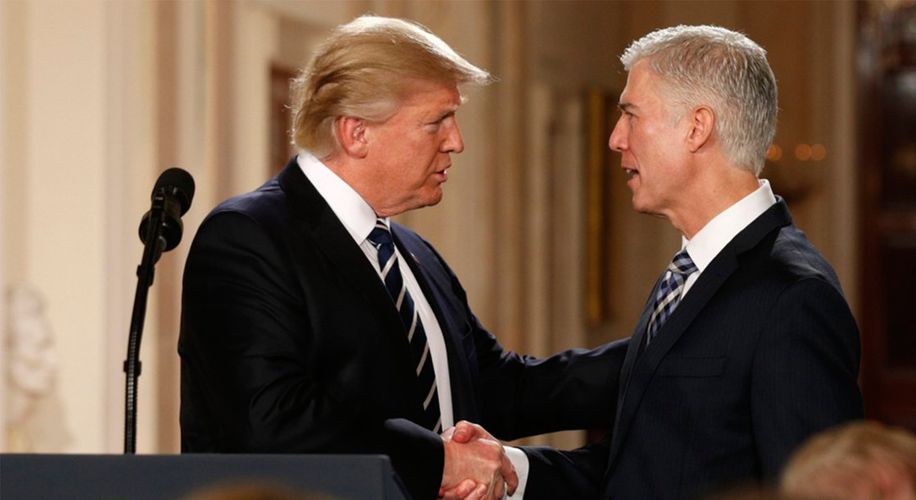 Will Democrats filibuster the nomination or cave in?

Will Democrats filibuster the nomination or cave in?

On Tuesday evening, during an unnecessarily suspenseful ceremony at the White House, Donald Trump nominated Neil M. Gorsuch to succeed the late Justice Antonin Scalia on the Supreme Court.

Gorsuch, a Colorado native who currently sits on the federal appeals court in Denver, has been one of the right-wing’s top picks to fill the vacancy, and shares many striking similarities to the hard-nosed conservative that served before him. Like Scalia, Gorsuch is known for authoring clear and concise legal opinions that tend to side with conservatism, and is also a self-proclaimed originalist. Gorsuch praised the late Justice Scalia as a "lion of the law” in his nomination acceptance speech on Tuesday.

"Judge Gorsuch has a superb intellect, an unparalleled legal education, and a commitment to interpreting the Constitution according to its text. He will make an incredible justice as soon as the Senate confirms him," Trump said during the announcement via Facebook Live.

The staunch conservative judge is just 49 years old, and if confirmed, would likely have a major impact on American law over the next decades. In the past, Gorsuch clerked for two Supreme Court justices, Byron White and Anthony Kennedy, and was appointed to his current role in the federal appeals court by George W. Bush in 2006.

While Republicans have been praising Trump’s selection of Gorsuch, Democrats have hinted at filibustering in retaliation to the right wing’s handling of Merrick Garland’s nomination in 2016. Garland, chief judge of the U.S. Court of Appeals for the D.C. Circuit, was nominated by former President Barack Obama to replace Scalia last year, but Republicans pulled out all of the stops to prevent his confirmation and ensure that the next president would make the selection instead.

Some Democrats, such as Sen. Jeff Merkley and Sen. Elizabeth Warren, have already announced that they would filibuster the confirmation hearing. Gorsuch needs 60 votes to avoid the filibuster, meaning that the White House must obtain the approval of eight Senate Democrats. But Trump has already started to pressure Republican senators into changing the traditional 60-40 rule and pushing his nominee through with a simple majority vote.

While Gorsuch is well versed in law and admired by many of his peers, his conservative tendencies will surely discomfort those on the left. The newly nominated judge sided with Hobby Lobby in a controversial 2014 case, who used religious freedom as an excuse to refuse contraception coverage for their female workers. Although Gorsuch hails from the state of Colorado, his views on cannabis are relatively unknown to the public.

All in all, if approved, Trump’s nominee will play a pivotal role in shaping the next few decades of law in America. If and when Gorsuch gets past the impending Democratic firewall, we can only hope that the Colorado native judge will rule by constitutional law rather than by the Trump administrations’ demands