The world’s first store to sell legal ‘ecstasy’ is now open in the Netherlands, but, as with all great things, there’s a catch.

De XTC Winkel in Utrecht is a “demo store,” MixMag reported. It will remain open until September, but since MDMA -- the so-called love drug -- is outlawed in the Netherlands, no one will actually be able to buy molly at this storefront.

In collaboration with researchers at the Utrecht University and the drug museum Poppi, De XTC Winkel challenges the public to imagine what safe, legal MDMA sales would look like.

“Suppose the government regulates the sale of ecstasy. What does that look like?” stated Poppi’s website, according to an autotranslation. “Can anyone buy it anywhere? Or would you prefer an age limit and strict supervision? You decide! Come to the ecstasy store and test it out.”

There are, essentially, three legalization models pressed into one at De XTC Winkel. Here’s how it works. 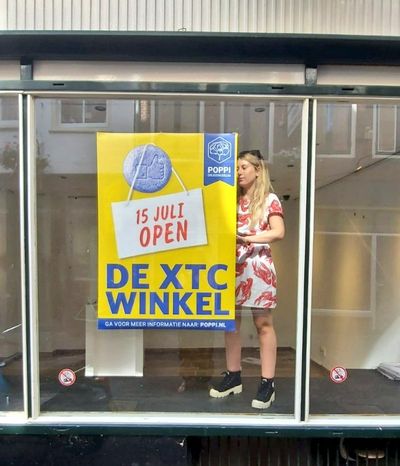 First, there’s the nightclub model. This is the current model where most folks get their MDMA. It’s entirely unregulated.

Second, there’s the pharmacy model. This is the most strict sales model, which is heavily regulated and closely monitored.

Third, there’s the storefront model, similar to what we see with licensed pot shops in the US. It’s heavily regulated from the sales end, but for the customer, it’s as simple as picking up a bottle of booze (or, in truly fortunate states, a bottle of weed).

Steven Rolles, senior policy analyst at the Transform Drug Policy Foundation visited the store and reviewed it in a series of tweets. One included a hypothetical package for legal ecstasy via the pharmacy model.

Its open to the public from Friday till middle of September

Visitors interact with the different models - and receive packaging with dummy pills - then give their reactions - to help inform policy development going forward.
4/ pic.twitter.com/Z7yjpmrTtp

It gets deeper than all that, too. According to the researchers, visitors will not only experience what MDMA storefronts would be like, they’re also encouraged to participate in a “serious game,” which is where the actual research study comes in.

Visitors can interact with the three legalization models as they please. Although no actual MDMA is sold or given out at the demo shop, participants are asked a series of questions to help the Dutch government determine how, exactly, stimulants such as MDMA ought to be legalized. Is there a maximum price point, where even the most loaded buyer won’t go above? Should there be an age limit (obviously), and if so, what age should that be? Should MDMA be sold in stale, generic packaging like affordable medications, or should it be sold in lavish, flashy packaging, like legal weed in the US?

While Dutch researchers explore what an adult-use or recreational MDMA market may look like, Americans continue to make progress on the medical front. The US House of Representatives recently approved a bipartisan defense spending bill that includes funds for researching medical uses of MDMA and other outlawed psychedelics.

MDMA is currently in Phase III clinical trials in the US, where it’s being studied as a psychiatric treatment for PTSD and depression.

To learn more about what legal MDMA sales may look like, check out Poppi's website by clicking here. (Site originally in Dutch.)

To learn more about MDMA's clinical trials in the US, check out the MAPS website by clicking here. (This one's in English.)

LEGALIZATION
ADULT-USE LEGALIZATION
PSYCHEDELICS
MEDICINAL PSYCHEDELICS
MORE...
MERRY JANE Staff
FOLLOW
MERRY JANE is based in Los Angeles, California and is dedicated to elevating the discussion around cannabis culture.
Share this article with your friends!
AD
By using our site you agree to our use of cookies to deliver a better experience.
Accept
Decline
MORE FROM MERRY JANE