NEWS
The NBA Is Coming Back for the Playoffs… Without Drug Tests
AD
The NBA playoffs are set to kick off at Disney World next month after an extended COVID-19 break. And the league is leaving its drug test kits at home.
Published on June 10, 2020

The National Basketball Association (NBA) is finally ready to return after a three-month hiatus due to COVID-19. But instead of Madison Square Garden, Staples Center, and the city-specific stadiums we’re all used to, the league will quarantine 20 teams at Disney World in Orlando to play a safety-conscious, shortened regular season, followed by streamlined playoffs. The one benefit to the basketball bubble? NBA players will finally be able to smoke as much weed as they want without worrying about drug tests.

According to NBA reporter Shams Charania, the league has agreed to continue tests for steroids and other performance-enhancing drugs, but will not subject athletes to screenings for recreational drugs like cannabis.

Sources: The NBA and NBPA have agreed to conduct performance-enhancing drug testing during resumed 2019-20 season in Orlando — but tests for recreational drugs will remain suspended.

Among America’s four major sports leagues, the NBA’s players have arguably been the most progressive when it comes to social justice issues. Recently, current and former players and coaches have repeatedly spoken out against the league’s continued anti-cannabis stance. Despite those vocal protests, NBA commissioner Adam Silver has offered supportive platitudes without any action.

But after three months with no games, no revenue, and plenty of drama, there are plenty of more pressing concerns about the league’s July return than post-game pot use. It is not yet clear if the cannabis free-pass will continue after the impending quarantine season, or if league rules will revert to regular drug testing once COVID-19 concerns loosen. 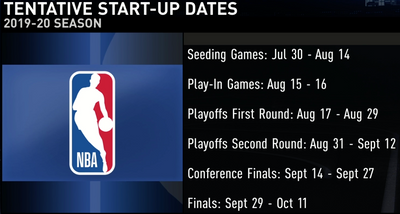 The NBA Players’ Union and team owners will presumably have to rehash the league’s collective bargaining agreement to deal with the pandemic-inspired changes. And once rule negotiations are on the table, it might open the door to get rid of the NBA’s weed ban altogether.

Save any complications with player or team personnel health, the NBA is currently scheduled to resume play on July 31st.

NEWS
SPORTS
ATHLETES
DRUG REFORM
MORE...
Zach Harris
FOLLOW
Zach Harris is a writer based in Philadelphia whose work has appeared on Noisey, First We Feast, and Jenkem Magazine. You can find him on Twitter @10000youtubes complaining about NBA referees.
Share this article with your friends!
AD
By using our site you agree to our use of cookies to deliver a better experience.
Accept
Decline
MORE FROM MERRY JANE