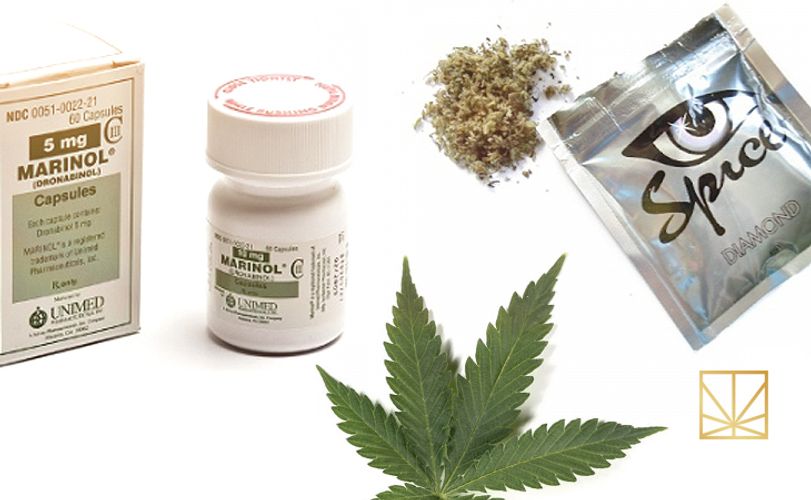 The Many Faces of Synthetic Marijuana

All synthetics are not created equal. MERRY JANE talks with an expert about the differences.

All synthetics are not created equal. MERRY JANE talks with an expert about the differences.

While most of us are trying to figure out the best way to harvest our fortunes in the cannabis industry, one might consider another easier, cheaper, faster option to make a buck – knock-offs. We spoke with the esteemed scientist Dr. Jeffrey C. Raber for some insightful answers to our more technical questions surrounding synthetic compounds and their viable applications for nutraceuticals or pharmaceuticals.

Perhaps you've heard of Spice or K2? These were both infamous brands of what one might call a marijuana knock-off or synthetic compound. To be clear, STAY AWAY FROM THIS STUFF. It's dangerous and can lead to psychotic episodes. (Frightening!) Now that we've got the severe warning out of the way, from a technical standpoint, this material is interesting and worth a conversation.

“Spice” to which it is commonly referred is a combination of dried herbs that is sprayed with synthetic cannabinoids. The intent behind the product was to deliver the psychoactive effects of THC (tetrahydrocannabinol) under the guise of a legal product. In the past few years, a number of websites have been developed to raise awareness about the dangers of this product, and global authorities have made a clear stance that it is both illegal and a public health threat. According to the European Monitoring Centre for Drugs and Drug Addiction, “Synthetic cannabinoids, or more correctly, synthetic cannabinoid receptor agonists, mimic the effects of cannabis and are the largest group of compounds monitored at European level by the EU Early Warning System on new psychoactive substances (EWS).” There is a cocktail of synthetic cannabinoids that could be contained in one of these “pot-pourri” packets.

Unfortunately, not all synthetic compounds work like the natural original compound that they mimic. Some of those mentioned above may have highly adverse side effects. Of utmost concern, the individuals most likely to consume this product are high school students who are ignorant to the dangers. “Synthetic cannabinoids have a similar structure to naturally-derived cannabinoids and work with our receptors to deliver similar physical responses,” said Dr. Raber. “If you make a copy of a key for a door lock, the key fits in the lock. You just might have to jiggle the key to get it to work, and it might be harder to disengage the key once unlocked. In some instances, synthetic cannabinoids are more dominant and inhibit other cannabinoids from making contact.” This could negatively effect our cannabinoid system, thereby derailing our health physically or mentally.

Not All Synthetics Are Created Equal.

With the improved political climate surrounding cannabis and 58% of Americans in favor of legalization, Big Pharma is wringing it's hands with delight, primed and ready to deliver new products to the “Green Rush.” Some are already here.

Marinol from AbbVie for example is synthesized THC. The product website explains that Marinol is intended as a therapy to treat nausea for patients with AIDS or those undergoing chemotherapy. Many parents are finding that CBD (Cannabidiol) is a treatment for seizures in children resulting from Dravet syndrome, so it is surprising to note that a possible side effect of Marinol is the potential for seizures. You might wonder why pharmaceutical companies would choose to synthesize naturally available plants. One consideration is that the Schedule I status made access to the cannabis plant complicated in the past. In some instances, synthetic compounds cost less. Using methadone as an example, the cost of production is lower than it would be for morphine. Producing morphine requires fields of poppies grown abroad, which then requires transport, travel through customs, etc. Methadone also has another benefit in that it inhibits the euphoric experience if the user attempts to get high on heroine or other related opioids while undergoing methadone treatment. Dr. Raber cites the great example of Taxol, a terpene derived from the yew plant, particularly effective against ovarian and breast cancers. “The yew tree is endangered and sufficient supply to extract the terpene is not possible. In this instance, the yew plant provides the inspiration to make a valuable therapeutic.”

Alternatively, sometimes naturally-derived plant compounds or nutraceuticals are far more cost-efficient. The terpene BCP (beta-caryophyllene) is a promising treatment for anxiety, shows cancer fighting properties, and helps with inflammation. BCP enjoys classification under the Food and Drug Administration (FDA) GRAS status. While you may immediately think of “grass”, the term hippies in the 70's so lovingly used to refer to weed, this is a federally-conferred acronym. GRAS stands for Generally Regarded As Safe indicating that lengthy (and expensive) FDA testing and trials are not needed to bring the product to market. In this instance, manufacturers would be wise to source BCP from a plant other than cannabis. BCP can be extracted from Rosemary, a hardy, drought-resistant herb commonly used in Italian cooking.

To learn more about BCP and its effective treatment for inflammation via CB2 receptors, read: Stay Slim, Healthy, and Feelin' Good with These Pro Tips.

Keepin' It Real. With the legalization of medical marijuana expanding through the U.S., the expensive cost of Marinol has become prohibitive for patients. Additionally, research shows that a combination of naturally-derived cannabinoids is more conducive to overall healing. Pharmaceutical companies are strategizing on ways to bring a naturally-derived product to market. In order to do so, pharmaceutical companies will have to navigate the FDA hurdles, and they will have to chemically alter ingredients in some way to achieve a limited monopoly known as a medicinal patent.

Epidiolex by GW pharmaceuticals is on the FDA fast track to bring an oil-based CBD formula to market. Under the FDA Orphan guidelines, defined as treating a disease that affects less than 200,000 individuals annually, GW can anticipate a shorter less expensive development path. Dr. Raber expounds that this is highly strategic. Once the product is FDA approved and on the market, doctors can prescribe Epidiolex off-label for anxiety as a possible example. GW is not liable as long as they don't market the drug for uses outside of the stated intent to treat Dravet and Lennox-Gastaut. Then, GW can revisit FDA approvals later for additional applications again with less financial or administrative hurdles since it's already been on the market.

For those seeking a naturally derived CBD medication or “cannaceutical” that is safely tested and currently available, Cannakids is saving lives treating children who suffer from cancer and epilepsy with their Honey Gold extracted CBD packaged in an organic coconut oil base. The Cannakids medicine is a composite of terpenes intended to bring a synthesis of the various healing elements of the cannabis plant without any unnecessary plant material. Dr. Raber likens this type of CBD oil medicine to the harmony created by playing a piano with all ten fingers rather that attempting to play a song with just one key. “Pure CBD doesn't work as well,” he says. “In our lab, we're studying the plant to understand all the molecules and how they work together; how they can be standardized to deliver the same physiological response consistently.” Finally, it is worth mentioning that pharmaceutical companies offer the possibility for the standardization of which Dr. Raber speaks. “GW is standardizing the procedure of growing and extraction. This requires enormous amounts of time money. While it is doable, is this level of sophistication required to deliver quality medicines? The answer is 'no,' and the maturing medical cannabis industry is showing that low cost efforts can also bring standardized and consistent quality products to the market which offer great therapeutic value to patients.”

This week, GW Pharmaceuticals released results of their Phase III study. Dr. Orrin Devinsky of NYU's Epilepsy Center stated, “These data demonstrate that Epidiolex delivers clinically important reductions in seizure frequency together with an acceptable safety and tolerability profile, providing the epilepsy community with the prospect of an appropriately standardized and tested pharmaceutical formulation of cannabidiol being made available by prescription in the future.” Epidiolex could potentially be the first FDA approved treatment for Dravet Syndrome patients.

We hope that the safe and necessary medicine will be made available to all of those who need it whether it comes from Big Pharma, a qualified lab, or is homemade.

Dr. Raber founded The Werc Shop in 2010 in an effort to support quality control and assurance in analytical testing services for the medical cannabis industry. He is a well-respected expert in the field of cannabinoid receptor medications.