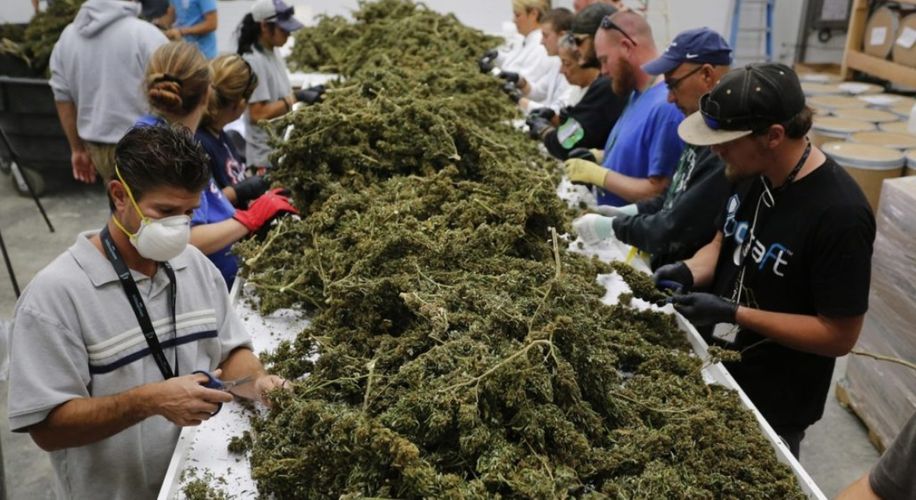 The Legal Cannabis Industry Has Created Almost 250,000 Jobs in the US

The legal weed industry is also predicted to grow at a rate of 250 percent from 2018 until 2028, vastly exceeding the expansion rate of any other US industry.

The legal weed industry is also predicted to grow at a rate of 250 percent from 2018 until 2028, vastly exceeding the expansion rate of any other US industry.

The legal cannabis industry in the US has already created nearly 250,000 jobs, and that number is predicted to more than double within the next decade, according to a new annual jobs report by Leafly.

As of early 2020, the legal weed industry created 243,700 full-time-equivalent jobs in the US, which is roughly double the number of jobs the industry offered in 2017. This represents a growth rate of 100 percent, a figure that no other industry even comes close to in modern times. But even as impressive as this number is, the report predicts that the number of weed industry jobs will expand by 250 percent within the next decade.

The total number of US cannabis industry jobs exploded last year, increasing 62 percent over 2018. In contrast, job growth between 2019 and 2020 expanded at a much more modest 15 percent. Leafly attributes this slowed rate of expansion to the unique troubles the industry had to deal with in 2019, including the EVALI crisis, financing issues, and layoffs at major companies.

Analysts were hoping that job growth would pick up again in 2020, but the ongoing COVID-19 outbreak may scuttle those plans. Although most states have allowed legal weed businesses to remain open during the outbreak, some businesses have been forced to close, and most have have to alter their standard practices to comply with social distancing regulations.

The crisis may not stop job growth this year, though. Illinois and Michigan just began selling adult-use weed in the past six months, and as more businesses obtain their licenses, the total number of jobs will increase. Maine may finally get around to opening its legal weed stores this year, as well, and lawmakers in Vermont and Washington DC are advancing efforts to legalize adult-use sales.

Prospective cannabis industry employees are likely to find the best job hunting in the country's most established weed markets. California currently boasts nearly 40,000 weed industry jobs — the most in the US — but Colorado, Washington, and Oregon are close behind. States with strong medical marijuana markets like Florida, Arizona, and Oklahoma are also ranked in the top ten list of pot industry jobs by state. And Illinois already has the tenth-highest number of weed jobs in the US, only four months after legalizing adult-use.

The report keeps track of both adult-use and medical marijuana industry jobs, which are available in the majority of US states. 16 states have chosen to shut themselves out of this expansion by continuing to prohibit all forms of cannabis, however. And in Washington DC and eleven other states, local laws and restrictions keep the local weed industry job counts at under 1,000 full-time employees.

Leafly explains that they continue to collect these job statistics on an annual basis because the US government refuses to keep track of them. Like every other US government agency, the Bureau of Labor Statistics refuses to acknowledge any business that handles a federally-prohibited substance, regardless of state legality. One might think that the feds would want to keep track of the country's fastest-growing industry, but this is apparently not the case.