NEWS
The Feds Finally Released the New Hemp Rules
AD
Hemp was federally legalized nearly a year ago, but the US Department of Agriculture is still hammering out the final rules for growing it. What are the changes, and how will they affect the average farmer?
Published on October 30, 2019

Hemp is marijuana’s much chiller cousin. Marijuana is federally defined as cannabis that contains more than 0.3 percent THC by dry weight. Hemp is any cannabis that falls under that THC level, meaning hemp can’t get anyone intoxicated, but it’s still useful for extracting CBD oil, fibers, textiles, seed for food, and making hempcrete cement.

The US Department of Agriculture issued the interim draft rules earlier this week, but the rules won’t be finalized for another two years. For the next 60 days, states and US tribes may challenge, question, or propose new rules for the US Department of Agriculture to consider. But in the meantime, these interim rules essentially act as the new official regulations for hemp.

Most of the new rules concern boring stuff like licensing costs, testing procedures, and what bureaucratic steps to take if a crop comes up “hot” for too much THC. We’ll break down the key takeaways further below.

Gallery — Feel-Good CBD Memes You Can't Get High On:

Defining hemp as weed with less than 0.3 percent THC isn’t as clear-cut as it looks in writing. Hemp is a plant, and plants don’t follow human rules or regulations. Furthermore, genetics alone do not determine a plant’s THC levels. Environmental factors can also influence THC production, so the feds are cutting farmers some slack here.

Furthermore, the rules state, if a hemp crop tests slightly above 0.3 percent THC, but it falls within this uncertainty range, it is still legally defined as hemp under federal law. 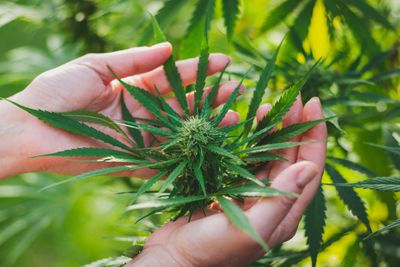 Weed That Tests Over the THC Limit Must Be Destroyed

Here’s the saddest part of the new rules: If a crop tests above the THC threshold, a federal agent must visit the farm and destroy all the hemp in that tested batch. And not just any ol’ federal employee can destroy hemp that tests hot. The agent must hold a special weed-handling license from the DEA or another federal agency. Hemp farm employees cannot touch the weed once it’s confirmed hot, since they’re technically handling marijuana at that point, and not hemp.

There’s also a ton of paperwork involved with destroying a hemp crop. All weights must be recorded, as well as who grew the hemp, where it was grown, and where the destroyed hemp material will be sent and stored.

Gallery — Fuck-Tons of Weed That No One Is Smoking Except Cops:

One new rule raised a lot of eyebrows, especially given hemp’s newly legal status, and the fact that the War on Drugs has needlessly ruined countless lives: Convicted drug felons may not produce hemp.

“A person with a State or Federal felony conviction relating to a controlled substance is subject to a 10-year ineligibility restriction on participating in the plan and producing hemp under the USDA plan from the date of the conviction,” the draft rules report states. “An exception applies to a person who was lawfully growing hemp under the 2014 Farm Bill before December 20, 2018, and whose conviction also occurred before December 20, 2018.”

Why aren’t felons allowed to produce hemp? The concern is that shady producers could use their hemp operations as covers for growing and distributing marijuana. While there is some truth to this fear, it’s a rare occurrence. In reality, legit hemp transporters get unjustly busted for drug trafficking at a far higher frequency than drug lords do shipping actual weed disguised as hemp. According to Marijuana Moment, the US Department of Agriculture clarified that the felon ban only applies to executives and owners of hemp companies or farms. Staff and lower-level employees do not fall under this ban.

What does this all mean? It means hemp is finally, totally legal and totally legitimate in the US! While everyone hammers out the details for hemp, we can only cross our fingers and hope to one day see the US Department of Agriculture issue similar guidelines for actual, fully-intoxicating marijuana.

HEMP
CBD
FEDS
REGULATION
MORE...
IN THIS STORY
CBD
Click to shop at our CBD store
Randy Robinson
FOLLOW
Based in Denver, Randy studied cannabinoid science while getting a degree in molecular biology at the University of Colorado. When not writing about cannabis, science, politics, or LGBT issues, they can be found exploring nature somewhere in the Rocky Mountains. Catch Randy on Twitter and Instagram @randieseljay
Share this article with your friends!
AD
By using our site you agree to our use of cookies to deliver a better experience.
Accept
Decline
MORE FROM MERRY JANE