NEWS
"The Bandit of Kabul" Details Stories From '70s Hash Smuggling Routes Between Afghanistan and Amsterdam
AD
Jesse Beisler’s “The Bandit of Kabul” details the story of his dad who traversed the Hippie Trail in the 1970s to smuggle some of the world best hashish from the far east into Europe.
Published on September 2, 2021

To state the obvious: a lot of stories about drugs are never written down — let alone published. Prohibition criminal laws make it too dangerous to share details of how drug enterprises are run. Luckily, the statute of limitations is running out on the Boomer generation’s drug offenses and fascinating literature is being written as a result; check out Home Baked: My Mom, Marijuana, and the Stoning of San Francisco by Alia Volz for one example.

Like Volz, author Jesse Beisler is a San Francisco kid with drug-selling hippie parents. But unlike Volz’s famous brownie-making mother Meridy, Beisler’s father Jerry was part of a drug economy far, far away from the Bay Area — geographically, if not spiritually. Jerry was known as “The Bandit of Kabul,” and produced and sold hashish along the Asian tourism route known as the “Hippie Trail” in the 1970s. 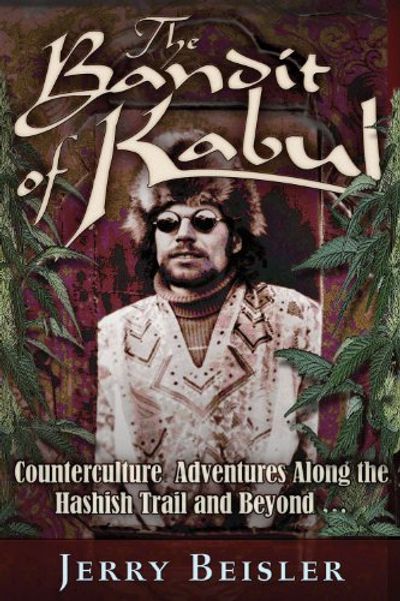 In a recent interview with VICE India journalist Shamani Joshi, the younger Beisler shared some of his father’s personal and business-related adventures that appear in the book.

Jerry and his partner Rebecca Wlpf arrived in Asia well after US cannabis prohibition started, but before many Asian countries began tightly policing cannabis.

By the ‘70s, Jerry was smuggling hashish from Afghanistan via a host of other countries into Amsterdam. The Bandit of Kabul goes into details about the people who helped him distribute, as well as their methodology for getting the drug from one place to another without being detected by law enforcement.

This account is made all the more fascinating considering how different cannabis laws and political environments are now since the ‘70s. In India — where much of The Bandit of Kabul takes place — cannabis has been illegal just since 1985, when the Parliament passed the Narcotic Drugs and Psychotropic Substances Act. Nowadays, it tends to be demonized.

Cannabis played a shamefully outsized role in the murder trip of Bollywood actor Sushant Singh Rajput. After text messages were discovered suggesting that Sushant’s girlfriend, actress Rhea Chakraborty, bought him marijuana, she was charged as being culpable for his death by auto-asphyxiation. Chakraborty eventually served a month in jail on a cannabis-related drug charge as a result, but managed a startling 180-degree turn back to being a movie sex symbol this year.

For hash history buffs, The Bandit of Kabul promises to be an interesting resource when it comes to learning about the history of hashish in the region. In its pages, the Beisler team recounts Jerry’s travels to the legal hashish stores of Kathmandu — “where you could openly sample and buy 20 different kinds of hash,” according to Jesse — and the northern Indian city of Varanasi. The explosion of Jerry’s first hash oil lab also suggests that the 2012-published book provides a very good time — and that it might deserve to join the pantheon of timely and informative dealer-kid family memoirs.

Buy The Bandit of Kabul here.

NEWS
HASH
CULTURE
HASHISH
MORE...
Caitlin Donohue
FOLLOW
Caitlin Donohue is a Bay Area-raised, Mexico City-based cannabis writer and author of She Represents: 44 Women Who Are Changing Politics and the World. Her weekly show Crónica on Radio Nopal explores Mexican marijuana culture and politics in the prohibition era. Follow Caitlin on IG @byrdwatch.
Share this article with your friends!
AD
By using our site you agree to our use of cookies to deliver a better experience.
Accept
Decline
MORE FROM MERRY JANE