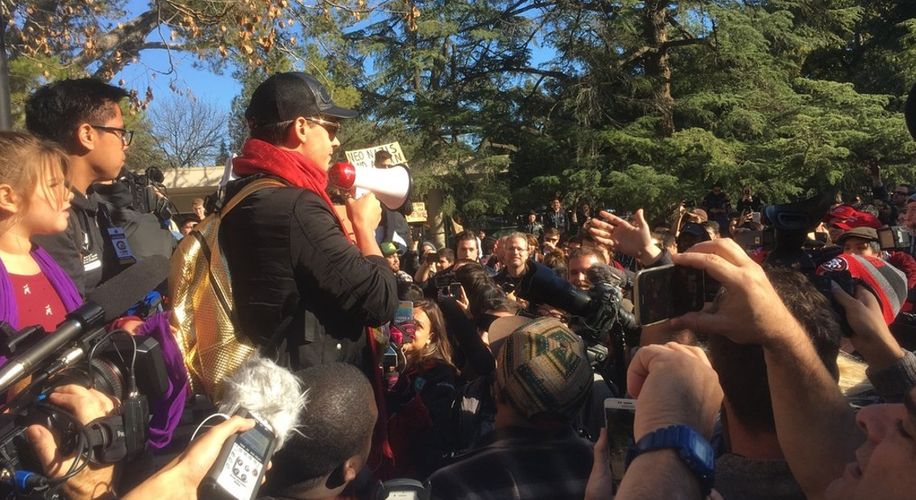 Yiannopoulos' alt-right event was canceled due to increasing violence.

Yiannopoulos' alt-right event was canceled due to increasing violence.

An army of infuriated student protesters successfully blocked Breitbart editor Milo Yiannopoulos and his pal, Martin Shkreli, “the most hated man in America,” from spreading their message of hate on campus grounds. The scheduled event at the University of California at Davis was to be one of almost 30 stops on Yiannopoulos' self-titled “Dangerous Faggot” college campus tour. During the series of incidents, at least one cup of coffee was thrown and most satisfyingly, Shkreli was reportedly hit in the face with a pile of dog poop.

“My event at UC Davis tonight has been canceled after violence from left-wing protesters,” Yiannopoulos posted on Facebook, as the rising tension prevented both hosts from speaking at the bigot bonanza.

“This was in no way a peaceful protest,” Davis College Republican executive director Andrew Mendoza told the Los Angeles Times. “I want to make that very clear.”

The reasoning behind the outrage is very clear. “If white privilege is a thing, why are people working so hard to be black?” Yiannopolis said at an earlier stop at the University of Wisconsin-Milwaukee. “All of the award shows and cultural events favor black culture.”

Yiannopoulos has been caught donning a Nazi-era iron cross, a symbol of white supremacy and anti-Semitism, and has been photographed holding books on Hitler. As a homosexual from Britain living in America, he hardly makes sense as the voice and face of the young alt-right.

This Breitbart article Yiannopoulos wrote uses pseudoscience to argue “scientific race differences” and defend segregation. Despite all this, Simon & Schuster decided to move forward, offering him a $250,000 book deal.

The morning after the canceled event, Yiannopoulos held a small counter-protest, speaking to a group at a tree planter outside Memorial Union at the UC Davis Campus.