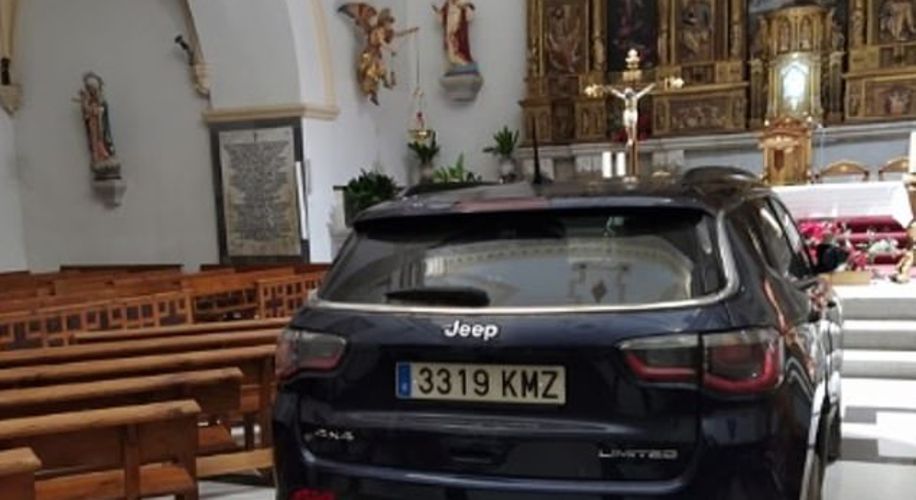 A man plowed his car through a church in Sonseca, Spain, claiming it was the only place where he’d be safe from demon possession.

A man plowed his car through a church in Sonseca, Spain, claiming it was the only place where he’d be safe from demon possession.

People speeding away from the cops often crash during the chase. But an incident on Wednesday may be the first time a cannabis entrepreneur ran his vehicle through a church to outrun Satan.

On Wednesday, an unidentified man, 35 — who reports claim owns a cannabis-product shop in Sonseca — drove his car through the front doors of the San Juan Evangelista Church. One witness said the man did not successfully ram through the doors on his first try, so he repeatedly slammed his vehicle against the doors until they broke open. The car then plowed through the church’s nave, damaging benches as it forced them to part like the Red Sea. He then stopped the vehicle just as it approached the altar.

When police found the man inside, he claimed the altar was the only place where he felt safe from satanic possession.

The unnamed driver sustained some injuries, The Daily Mail reported. Police took him to the Virgen de la Salud de Toledo Hospital for treatment. Authorities suspect the man may have experienced a psychotic break, possibly from drug use, though no toxicology results have yet been released.

Initial reports did not identify the name of the driver’s cannabis-product store, nor did they clarify if he only sold cultivation equipment or actual weed-derived goods. Cannabis clubs have operated within a legal gray area in Spain since the ‘90s, though the nation officially decriminalized pot use in “private spaces” in 2015.