NEWS
Snoop Dogg Will DJ a Special Livestream Set on 4/20 to Celebrate “The Chronic”
AD
On April 20th, the Doggfather himself will commemorate the worldwide digital re-release of Dr. Dre’s iconic album, “The Chronic,” with a smoke-in and livestream DJ set. Here’s how to tune in for the "THE CHRONIC LEGALIZED WORLDWIDE."
Published on April 20, 2020

On Monday, Snoop Dogg, aka DJ Snoopadelic, will personally drop some lava-hot beats during this year’s international cannabis celebration in honor of the worldwide digital re-release of the groundbreaking 1992 album, The Chronic.

At exactly 4:20 pm PST on April 20th, a livestream of Snoop, presented by eOne, will beam his DJ set to phones and desktops through MERRY JANE’s own Instagram for the special event "THE CHRONIC LEGALIZED WORLDWIDE."

“As MERRY JANE is now the number one media source for all things cannabis-related, we wanted to pay tribute to the innovators who paved the way for today’s fastest growing industry,” said Scott Chung, MERRY JANE’s COO, in a press release. “Dr. Dre’s The Chronic is widely considered the most well-produced album of all-time. From its name, artwork, and introduction of Snoop Dogg’s artistry, The Chronic revolutionized modern cannabis culture, and we are proud to provide our global audience a digital experience for a responsible, 4/20 holiday.” 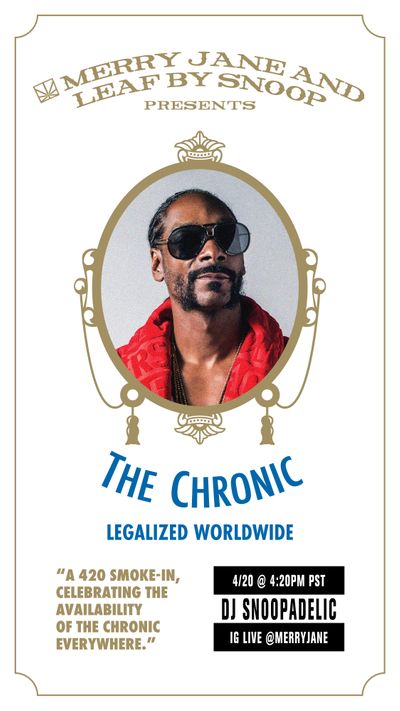 At the tail-end of 1992, G-Funk pioneer Dr. Dre introduced the world to a 19-year-old Snoop Dogg on The Chronic. And Snoop wasn’t just a featured guest on the album, either: The Doggfather appeared on 13 of the album’s 17 tracks. The groundbreaking record also launched the careers of other now-legendary West Coast artists, including Nate Dogg, Daz Dillinger, Warren G, Kurupt, Lady of Rage, D.O.C, and RBX. The Chronic’s influence on hip-hop, cannabis culture, and history is unparalleled, and it’s still felt throughout the world to this day.

In fact, The Chronic left such a profound impact on American culture that the US Library of Congress — the nation’s most pristine historical archive — recently inducted the album into the National Recording Registry, forever preserving the work as an “aural treasure” for future generations.

While the album was released 28 years ago, Dr. Dre and eOne will re-release The Chronic on all streaming platforms globally for the first time on April 20th. So, even though 4/20 rallies and festivals have been canceled worldwide due to the pandemic, we can still kick back and get lit with Snoop — one of the most important musicians and weed activists of our time. Don’t miss "THE CHRONIC LEGALIZED WORLDWIDE" featuring Snoop Dogg on Instagram Live, stay tuned for a series of articles about the landmark album, and remember to blaze responsibly!

NEWS
420
MUSIC
HISTORY
MORE...
MERRY JANE Staff
FOLLOW
MERRY JANE is based in Los Angeles, California and is dedicated to elevating the discussion around cannabis culture.
Share this article with your friends!
AD
By using our site you agree to our use of cookies to deliver a better experience.
Accept
Decline
MORE FROM MERRY JANE